Traditionally, headphone amps have been afterthoughts -- relatively low-cost circuits built into receivers, computers, portable media players, etc. After all, even with relatively insensitive headphones, the amp usually needs to put out no more than 50mW -- 0.05W -- to drive headphones to loud volumes with no audible distortion. But with headphones’ recent surge in popularity, and the concomitant growth in the number of hardcore headphone enthusiasts, many manufacturers have been putting serious design effort and resources into their headphone amps.

Simaudio’s Moon Neo 430HA ($3500 USD in base form, $4300 as reviewed with optional DAC) could arguably be considered the most serious headphone amp to date. There are more expensive amps -- Goldmund’s Telos HDA ($10,000) and Woo Audio’s WA-234 ($15,900), to cite two examples. But those amplifiers, despite their cost, are relatively simple, bare-bones products that lack some of the features enthusiasts may want, such as a variety of digital and analog inputs, balanced output, etc.

I can’t think of a feature the Moon 430HA doesn’t have that I would want. A partial list of what you get: balanced output on a single four-pin XLR and dual three-pin XLRs; XLR and RCA analog inputs; an optional DAC module that handles PCM at resolutions up to 32-bit/384kHz as well as DSD up to DSD256; an analog crossfeed circuit that helps get rid of that “sound in your head” effect; and RCA analog line outputs that let you use the 430HA as a preamp. The Moon Neo also has features that make it appropriate for high-end custom installations, including an RS-232 control port, an IR control port, and a remote control. 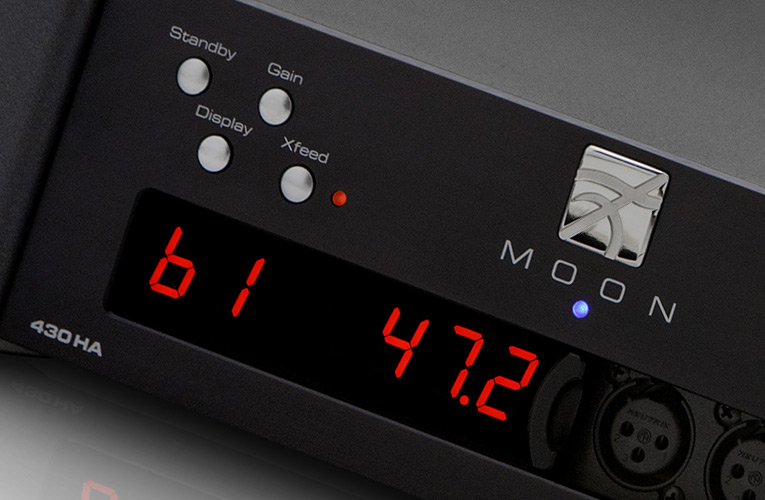 What’s missing? I guess Simaudio could have added Bluetooth wireless, but I suspect the people buying this amp wouldn’t care about that. Anyway, there’s a 3.5mm front input you can use with your smartphone or tablet; that’ll give you some level of convenience without the sonic degradation of Bluetooth.

Ultimately, though, you probably buy a $3500 headphone amp primarily for its sound quality, and based on how the Neo 430HA is built, it sure ought to sound good. Its power supply employs dual toroidal transformers to ensure there’s plenty of power on tap with minimal electromagnetic interference from the power supply. A large bank of 16 power-supply capacitors smooths out the power and provides extra headroom if and when the amp needs it. Seven separate voltage-regulation stages ensure that the power demands of one section of the amp don’t affect the others, and also help isolate the 430HA’s analog sections from its digital sections. Four of these regulation stages are fully discrete (i.e., they use separate transistors, not integrated circuits), and are claimed to produce virtually unmeasurable noise. 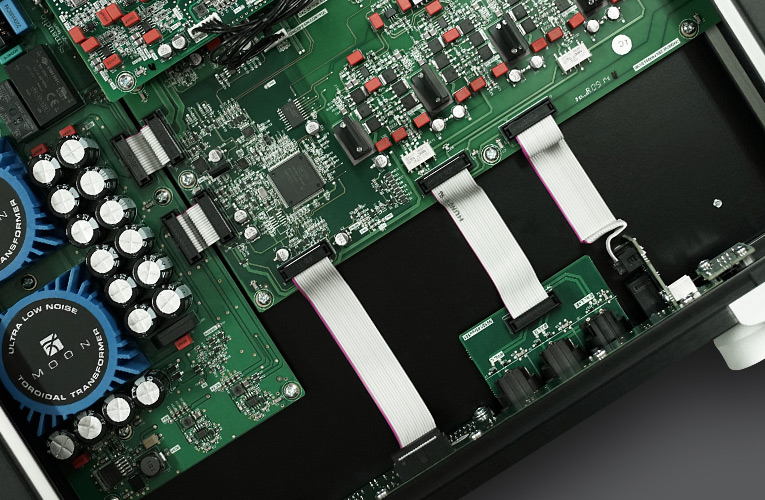 The amplification circuit itself is fully differential, meaning it’s essentially two amplifiers -- one each for the audio signal’s positive and negative halves -- laid out in a mirror-imaged arrangement. The advantages of this design are that it helps cancel incoming noise and it doubles the amplifier’s slew rate; i.e., the speed at which the amp can respond to incoming signals.

From the spec sheet, at least, the Moon Neo 430HA looks like one of the most impressive headphone amps ever created. Now it’s time to hear if all that high-end construction has yielded a substantial improvement in sound quality.

The Moon Neo 430HA includes the usual accessories you’d expect to find with a preamp: a power cord, a remote control, and a manual. There’s also a SimLink cable -- just a cable tipped with 3.5mm plugs that you can use to connect to other Simaudio components so they all turn on and off simultaneously.

The sample I received came with the optional DAC module installed ($800). My guess is that almost everyone who buys a 430HA will get it with the DAC. It’s a bargain, considering that it includes an ESS Sabre Reference DAC chip that can accept PCM signals up to 32/384 resolution, and that it can natively process DSD files up to quad bitrate, without converting them to PCM. (Yeah, I know, almost all DSD files have been processed through PCM anyway, but hey -- I’m just reporting here, I’m not the poster boy for DSD.) The DAC also includes two coax (RCA) inputs, a TosLink input, and a USB input.

I suppose if you already have a great DAC and just need the amp section of the Neo 430HA, you might want to skip the onboard DAC option; otherwise, it seems like a no-brainer.

Operating the Moon Neo 430HA was actually more straightforward than other high-end digital preamps I’ve used because it doesn’t rely on menus. Everything is controlled through discrete buttons on the front panel, which made it fast’n’easy to make all the necessary adjustments. (The remote controls power, volume, input, and mute; I didn’t use it.)

One feature I haven’t yet discussed is the high/low gain setting, accessible via a front-panel button. The 430HA defaults to low gain, and even with the relatively inefficient HiFiMan HE-560 headphones (86.7dB at 1mW, by my measurement), that was more power than I needed. Maybe you’d need the extra 6dB of the high-gain setting for something like HiFiMan’s notoriously inefficient HE-6 model (I measured 81.1dB at 1mW); otherwise, this button can probably go unpressed. 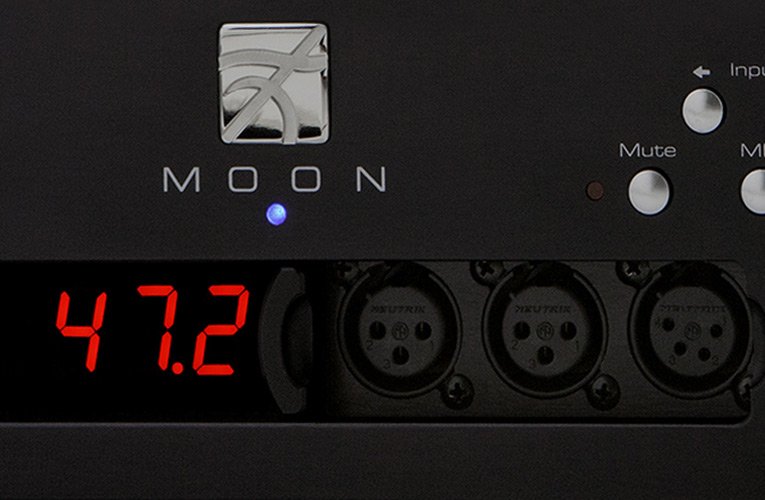 Simaudio says the onboard DAC is plug’n’play with Macs; to get it to work with my Toshiba laptop running Windows 7, I had to load a driver. This wasn’t a hassle at all, and it’s a process I often have to go through, but if I recall correctly (I was working for a computer magazine at the time), Microsoft said it had this problem fixed with Windows 95.

I used the Moon Neo 430HA mostly with the HiFiMan HE-560s, an ideal choice: they’re outstanding headphones that are hard to drive. I also briefly used Oppo Digital’s PM-2 planar-magnetics: very good headphones that are easy to drive. Most of my test material was digital files sourced from my Toshiba laptop. I also briefly used the analog inputs with a Music Hall Ikura turntable and an NAD PP-3 phono preamp.

I’m not sure why, but when I sat down to do a serious evaluation, I was convinced that the way to start was with orchestral music. Fortunately, my personal test CD includes two “blockbuster” snippets from organ symphonies: the bassiest moments from the recording of Saint-Saëns’s Symphony No.3, “Organ,” with organist James David Christie and Max Hobart conducting the Boston Civic Symphony, from the Boston Audio Society Test CD-1; and organist Michael Murray’s recording of Joseph Jongen’s Symphonie Concertante for Organ and Orchestra, with Edo de Waart conducting the San Francisco Symphony (16/44.1 WAV, Telarc CD-80096).

The Neo 430HA seemed to laugh off these challenges, never showing even a slight sense of strain despite the presence of substantial 16Hz energy in the Saint-Saëns, and despite the fact that the HE-560s aren’t easy to drive. That deep, pants-flapping (OK, maybe earlobe-flapping) bass didn’t distort one bit, and didn’t seem attenuated at all.

Perhaps more important was the detailed sense of ambience I heard. I got more than just a general sense of reverb; I got a very precise sense of sounds reflected off the surfaces of the concert halls in which these recordings were made. Ever been to a church during an unamplified acoustic performance (a choir, for example) and sense the reflections of the music off the ceiling? It’s as if you have a sort of radar -- you can feel the shape and height of the ceiling even without looking at it. This isn’t easy to portray, and it’s even harder to capture through headphones -- but it was easy to hear through the HE-560s and the Moon Neo 430HA. I heard it through the Goldmund Telos HDA, too, but through the Sony PHA-2, some of the details in the ambience were lost -- it sounded a little more like artificial reverb. The Telos HDA trumped the Neo 430HA in only one area: the strings, which sounded smoother through the Goldmund. 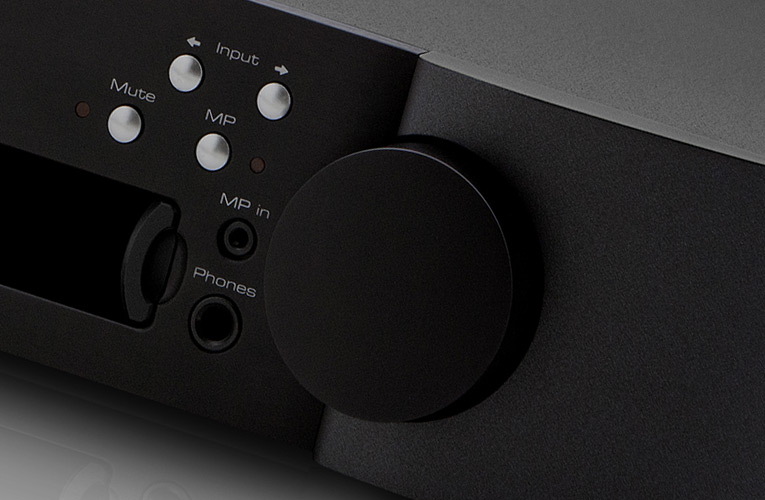 Drummer Franklin Kiermyer’s Further (256kbps MP3, Mobility Music) provided an even more strenuous workout for the Neo 430HA. Track 2, “Bilad el-Sudan,” combines the intensity of John Coltrane’s A Love Supreme with the power of a Black Flag performance and a touch of the minimalist, repetitive rhythms of Steve Reich. (Intrigued? Download it for free at further.kiermyer.com.) There’s a big sense of space (probably digital reverb) in this live recording, caused partly by the incessant pounding of Kiermyer’s toms. The Neo 430HA kept the chaos together, delivering tight, precise bass (no small trick with this music) and a thrilling sense of ambience. The Sony -- a good product for its price -- couldn’t quite handle it; there seemed to be a subtle distortion, accompanied by a reduced sense of space and a slightly hashy sound on Azar Lawrence’s soprano sax. With the Telos HDA, I got a subtly better sense of the sound of the sax; I heard the instrument’s bell, for one thing, and I thought the Telos HDA’s reproduction of ambience sounded a bit more seamless and natural. But the Neo 430HA kept the bass under better control. This latter difference was somewhat less evident through the much-more-sensitive Oppo PM-2s.

Trumpeter Lester Bowie’s incredible recording of the title track of his I Only Have Eyes for You (16/44.1 WAV, ECM) made the differences among the amps crystal clear. It’s such a compelling performance, and all of the headphone amps sounded great with it. But when I listened to the subtlest components of this recording, the differences were obvious. For instance, the splash cymbal that marks the end of the intro sounded almost synthesized through the PHA-2; it seemed to materialize suddenly in space, rather than having been struck with a drumstick. Through the Neo 430HA, I could easily sense the tip of the drumstick hitting the cymbal. I also got a much greater sense of the splattiness of the horns through the Neo 430HA. The Goldmund sounded much the same as the Neo 430HA on this cut, just a bit smoother.

Playing a few LPs through the analog inputs of the Neo 430HA and the Telos HDA -- thus bypassing the DAC stage in each -- gave me the impression that much of the difference between them was due to those internal DACs. With Stanley Turrentine’s Rough ’n’ Tumble (LP, Blue Note 84240), the two amps sounded very similar, the Telos HDA gaining just a very slight advantage in treble smoothness.

I briefly tried the 430HA’s analog crossfeed circuit. It sounded similar to what I remember hearing from the analog circuit HeadRoom has used in its amps. It does help get rid of that “sound coming from inside your head” effect, but ultimately I prefer the unprocessed stereo presentation.

I think Simaudio’s Moon Neo 430HA will be a big hit among headphone enthusiasts. It can drive any pair of headphones I’ve ever encountered to loud levels; it can handle almost any digital or analog source (assuming its optional DAC module is installed); and despite its high-tech look, it’s a pleasure to use. Most important, though, is the sound, which is a substantial step up from the lower-priced headphone amps that make up the bulk of the market these days. Maybe it does make sense to spend $4300 on a headphone amp!