JBL has upgraded its series of Everest Elite headphones with the new 750NC. A price of $299.95 USD might seem a bit much for a pair of headphones made almost entirely of plastic, but as I grew more familiar with the Everest Elite 750NCs, I began to think they might be worth it. 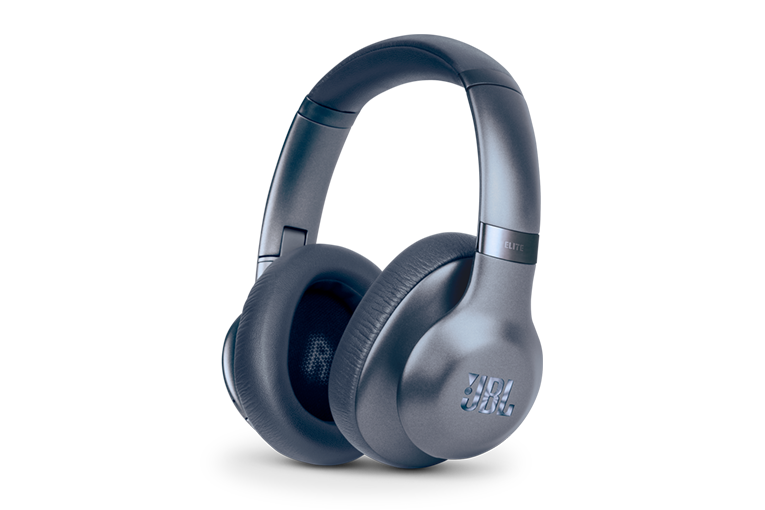 I like JBL’s packaging. Remove a slipcase of heavy cardboard that pictures the Everest Elite 750NCs and lists their features to find a second box, this one black with a flip top. Open that to reveal a hard carry case containing the headphones and a little, ovoid hard case for the accessories: an audio cable with a 2.5mm plug at one end and a standard 3.5mm plug at the other, a USB-to-Micro-USB charging cable, and an airline adapter plug. Another box, small, long, and black, houses the paperwork: a quick-start guide; a promo card for the My JBL Headphones app; a card for the one-year warranty; and a guide for disposing of batteries.

The headphones themselves look sleek and modern, and are available in Gun Metal, Steel Blue, or Silver. There’s some metal in the hinges, but otherwise, everything is plastic. But the 750NCs’ construction seems rock solid -- they gave where needed for a secure fit. The construction is unusual in that the headband is short and the earpiece arms long -- the fit is adjusted high up, where they connect to each other, with click detents. (Last year’s JBL Everest Elite models didn’t have detents.) The earcups pivot for flat storage in the case, and can be folded where they meet the arms. 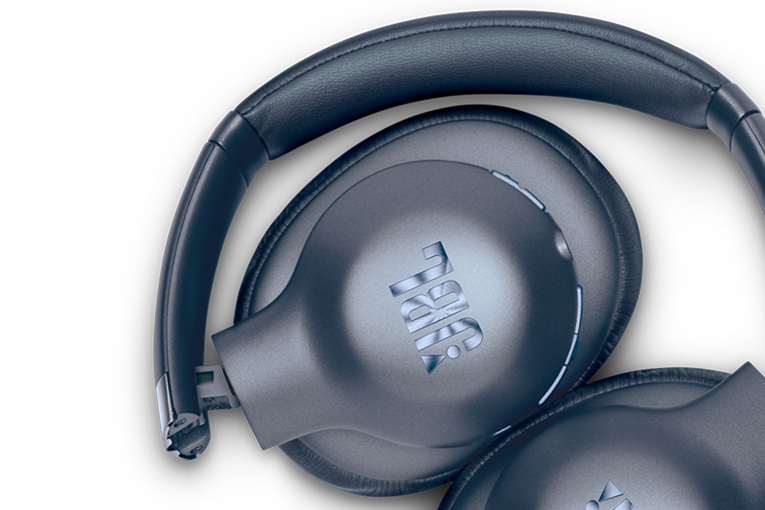 There are JBL logos on the outside of each earcup, but not on the headband. A large L and R on the respective inner grilles ensure correct stereo orientation. Discreetly etched into the plates that cover the hinges are “Everest” (right) and “Elite 700” (left). The generously padded earcups are oval. It seems that headphone manufacturers have at last realized that most people don’t have round ears.

Because the Everest Elite 750NCs can be used wired or wirelessly, at the bottom of the left earcup is a proprietary 2.5mm jack rather than the usual 3.5mm jack. Unless you already have a cable with that configuration, you’ll have to use the one JBL provides. It’s pretty nice, and includes an inline Play/Pause switch.

The rest of the controls are on the bottom and edges of the right arm, where it connects to the earcup. From left to right, they are: Power, Volume Up/Next, Pause/Play, Volume Down/Previous, a Micro-USB jack for charging, a Bluetooth pairing button, and a button marked S, to activate the active noise canceling (ANC). Through JBL’s app, the S button can be programmed to provide gradations in the amount of ambient noise allowed into the mix, or to turn ANC on and off. Pressed and held, it activates JBL’s patented TruNote technology, which calibrates and personalizes the sound, based on the fit of the 750NCs’ earcups to the user’s ears. A tiny bump on the surface of the Play/Pause button lets you know when your finger has found it.

The zippered carry case is a nice thing to have, with storage pockets and a loop for attaching it to a backpack. The quick-start guide is printed in the smallest font I’ve ever seen in a document intended to inform. You’d do better to look things up online; otherwise, use a magnifying glass. Those using the Elite with a smartphone will be delighted to know that JBL has added circuitry to get rid of the echo one finds in so many such devices.

I found the Everest Elite 750NCs quite comfortable. They hugged my head without much pressure, but couldn’t be dislodged easily even when I was moving around. They’re all-purpose cans for use during physical activity, quiet times at home, or on the commute to work.

When you turn them on, you’ll hear a voice say “Powering on,” and a blue LED will light. The 750NCs then automatically go into pairing mode; but once you’ve selected them on your Bluetooth device, you won’t have to do it again for that device -- it will automatically pair with the JBLs, and the voice will say “Connected.”

The My JBL Headphones App is free and can be downloaded to your device. It serves several functions: you can turn the voice announcements on or off, configure the ANC switch, set the amount of ambient noise desired, choose among three presets (Jazz, Vocal, Bass), and customize and save your settings of the ten-band graphic equalizer. You can also access TruNote, which uses a sweep tone to adjust the 750NCs’ output to your ears’ actual distances from the drivers. Through the app, JBL can also deliver updates. In fact, as soon as I activated the app, I was prompted to install a firmware update; the process was smooth and easy. 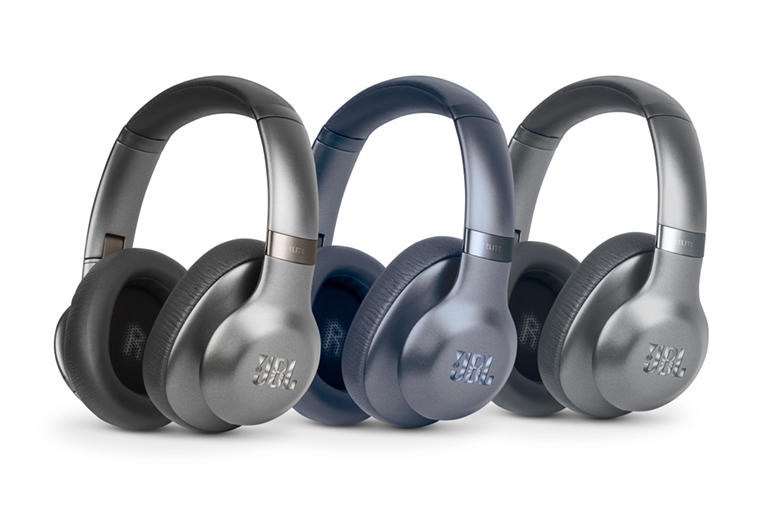 All of the buttons worked as they’re supposed to, but too many were crowded into too little space. I had to train my finger to find the center button on the right earcup (the little bump helped). But too often, I had to remove the ’phones and look at them to find other buttons. On the earlier model, the controls were divided between the earcups and were easier to use.

The wired cable has to be pushed in hard to make a solid connection. It will click once; push until it clicks again, and it will be solidly attached. The ANC function can be used with a wired or Bluetooth connection, but when wired, the multipurpose switch on the headphones doesn’t work; you have to use the inline switch on the cable.

The 750NCs had more range than any other Bluetooth headphones I’ve tried: nearly 40’ inside, 50’ outdoors. They sounded pretty much the same wireless as wired.

The tight, well-considered fit of the Everest Elite 750NCs made for very good passive noise cancellation, but the ANC made things even quieter. In fact, it worked so well that I left it on for all of my listening. Today, my neighbor across the street is landscaping his property with a Bobcat tractor, which beeps annoyingly when put in reverse. ANC on, Bobcat gone.

The 750NCs’ output seemed about average -- loud enough for everything but damaging my ears. Via Bluetooth, turning the volume all the way up produced no perceptible distortion.

The Everest Elites’ sound balance was tilted toward the bass but wasn’t boomy; I just felt enough warm, focused bass to be aware of it on initial hearing. After I listened for a while, the bass was still prominent but not unduly so. The midrange seemed just right -- perhaps without ultimate presence, but well balanced with other parts of the audioband. The highs were just short of bright -- always there when needed, almost never aggressive. Overall, the 750NCs’ sound was warm. 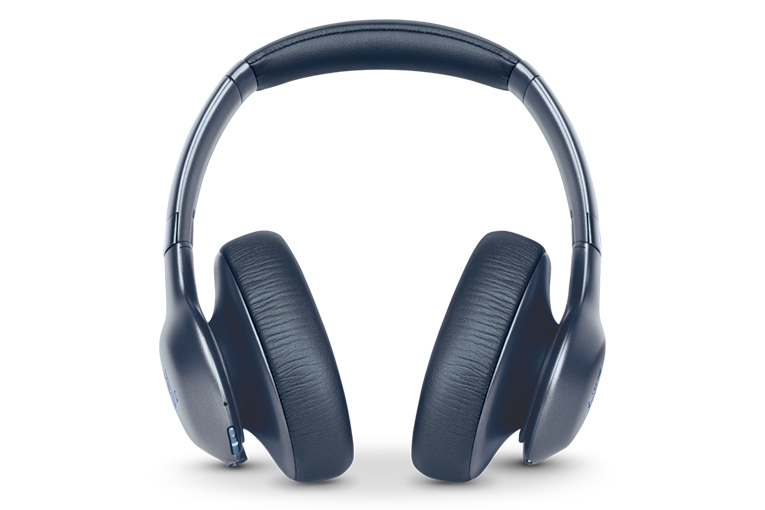 The stereo separation was very good, the imaging only average. Soundstages were of average depth. The TruNote calibration didn’t alter anything dramatically, but it seemed to slightly focus and tighten things. Of course, with these headphones, unlike many others, you can alter the sound to your taste. If you want brighter highs, you can use the graphic equalizer. I found JBL’s factory settings had excellent balance and so left them alone.

I’m a big fan of the Zombies. The band was recorded with great clarity, and The Decca Stereo Anthology (16-bit/44.1kHz ALAC, Decca) is a treat from beginning to end, including one of the sexiest renditions of the Gershwins’ “Summertime.” Chris White’s bass and backing vocal were firmly in the JBLs’ right earpiece, Paul Atkinson’s guitar filled the left, and Colin Blunstone’s lead vocal was at the center of the soundstage. The separation changed very slightly when the other voices entered -- both channels were pulled in a bit toward the center. The 750NCs displayed prominent bass and slightly rolled-off highs, with an overall sound that was warm and appealing.

In “Being Alive,” from Stephen Sondheim’s Company (16/44.1 ALAC, CBS/Sony Original Cast), Dean Jones’s voice was dead center, other cast members making comments from all over the place. Through the JBLs, the voices had great presence, and the orchestra a warm yet somewhat aggressive sound, with slightly emphasized bass and very slightly reticent highs.

Well over 100 recordings of Brahms’s melodic Piano Concerto No.2 are currently available, but to my mind one of the best is by Russian pianist Emil Gilels, with Eugen Jochum conducting the Berlin Philharmonic (16/44.1 ALAC, Deutsche Grammophon). It sounded sumptuous through the Everests, with rich, focused bass, and crisp enough mids and highs to accurately reproduce the percussive sound of the piano. This has to be one of my picks for 100 Best Recordings of All Time: a magnificent, idiomatic performance captured in the highest sound quality.

Further listening left the lasting impression that the Everest Elite 750NC headphones gave great results with any sort of music, with a slight nod to the bass for a warm sound.

JBL’s Everest Elite 750NC headphones are an improvement on the earlier model -- except for the controls, which are difficult to use without looking at them. This won’t bother those who settle in for long listening periods, but people on the go, who have to shift between listening and conversation, live or via phone, might find it a challenge.

The 750NCs look sleek, especially in Steel Blue, and are exceptionally comfortable to wear, with a secure fit that doesn’t pinch. JBL’s app offers flexible settings and a ten-band graphic equalizer. The battery life is normal, the Bluetooth range exceptional, and the 750NCs come with a good, hard carry case. They’re a fine all-around pair of headphones. If you’re looking for warm sound and are willing to put up with the less-than-intuitive controls, you can’t go wrong here.