Sennheiser HD 4.50 BTNC headphones measurements can be found by clicking this link.

Some of the fabled audio brands of my teen years, in the 1970s, seem to be aging even less gracefully than I am as they face brutal competition from online merchants and low-cost Chinese brands. Sure, established names like Sennheiser can still command a premium over such brands as Fleeken, Hiearcool, and Paww. But when consumers can choose between OK headphones for $70 and name-brand cans for $350, most will likely cheap out. I’m guessing this is why Sennheiser has introduced the HD 4.50 BTNC noise-canceling Bluetooth headphones for $199.95 USD -- half the price of their next-least-expensive current models of this type, the PXC 550 Wireless and HD1 On-Ear Wireless, both at $399.95.

I can find no obvious evidence of cost-cutting in the HD 4.50 BTNCs. In fact, I think they’re better-looking than all of Sennheiser’s previous noise-canceling (NC) headphone models, except for the awesomely retro Momentum HD1 Wireless ($499.95). The HD 4.50 BTNCs are clearly targeted for frequent fliers -- their rechargeable battery has a claimed charge life of 19 hours with NC on, and they fold up into a soft-sided travel case that can fit pretty easily into a typical laptop bag. Sennheiser also offers a non-NC (but still Bluetooth) version, the HD 4.40 BT ($149.95). 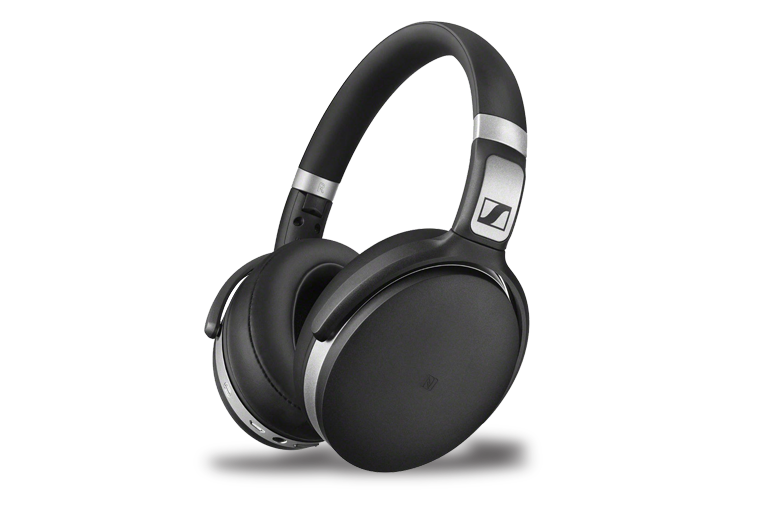 Some of Sennheiser’s previous Bluetooth NC models, such as the HD1 Wireless and the recently discontinued MM 450-X ($349.95 when available), have ranked among my favorites in the category; I was curious to hear if they could deliver the same magic for a radically lower price.

The case that comes with the HD 4.50 BTNCs is nothing special, just flimsy fabric reminiscent of the sort used for the little toiletry packets airlines give you on overseas flights. At least the case is small enough to slip into a large purse or a laptop bag -- something sadly untrue of the cases that come with many NC headphones. For times when you have to use a wired connection, such as when you want to listen to a movie on an airplane, Sennheiser provides a 55” (1.4m) cable tipped with a 3.5mm plug on the source end and a 2.5mm plug on the headphone end; a USB-to-Micro-USB charging cable is also included.

The HD 4.50 BTNCs felt a little tight, but my hat size is large -- 7 3/4 -- so they probably won’t feel so snug to most people. The earpads are a bit firm for my taste, and not quite big enough to comfortably enclose my pinnae, but overall, the HD 4.50 BTNCs rank about average or a hair below that for comfort. I could wear them for about 90 minutes without needing a short break to rub my earlobes.

The upside to the tightness was that they made a dependable seal around my ears, which helped improve the isolation. I took no flights while testing the HD 4.50 BTNCs, but was able to try them with my Butterworth Airplane Sound Simulator (B.A.S.S.) -- the same 4.1 setup I use for measuring the amount of isolation from exterior sounds provided by a set of headphones -- playing a recording of airliner cabin noise instead of the pink noise I use for measurements. I found the HD 4.50 BTNCs’ noise canceling above average but not outstanding. They easily beat out the mediocre NC of AKG’s N60 NCs ($249.95) and N60 NC Wirelesses ($299.95), but couldn’t approach the eerie near-silence created by Bose’s QuietComfort 35s ($349.95). 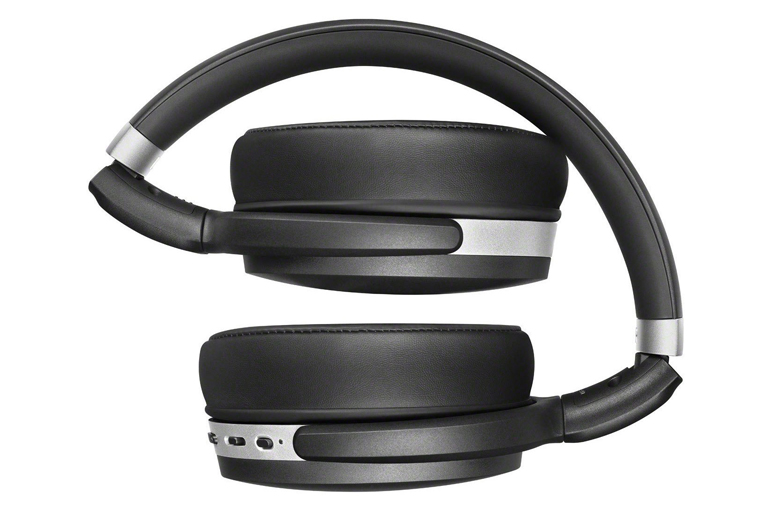 The right earpiece has three controls: an on/off button, a +/- volume rocker that turns NC on and off when pushed in the center, and a next/previous track switch that doubles as an answer/hang-up control when you’re taking phone calls. All of these controls are small, but I found it pretty easy to operate them by feel after a few minutes of use.

Sennheiser offers CapTune, an interesting, free smartphone app that works with any headphones, not just Sennheisers. It lets you tune the sound of the headphones using either a six-band graphic or two-band parametric equalizer. It also offers a terrific feature called SoundCheck, a wizard program that walks you through the tuning process. Play a piece of music, and SoundCheck presents you with two different EQ curves, labeled A and B. Pick the one you prefer, then flick left to hear another comparison. After seven A/B comparisons, SoundCheck crunches the results and presents you with a curve customized for your taste and your headphones. I was amazed at how well SoundCheck worked -- it delivered a subtle improvement in the sound of not only the HD 4.50 BTNCs but of a couple of other headphones I had on hand. Unfortunately, to get the benefits of SoundCheck, you have to use CapTune as your music player, which you probably don’t want to do; I couldn’t figure out a way to get CapTune to work with Spotify (although it’s compatible with Tidal). I wish Sennheiser would release this app in a version that sits atop whatever music player or streaming system you want to use.

Judging from the customer comments on Sennheiser’s website, I’m not the only one who found the HD 4.50 BTNCs a little tight. But neither am I the only one who was enthusiastic about the sound. 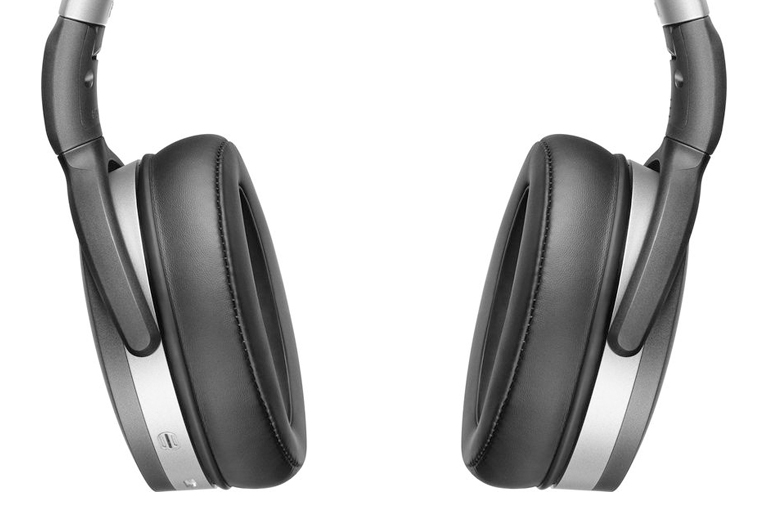 Tito Puente’s classic “Ti Mon Bo,” from his album Top Percussion, originally released in 1957 on RCA Living Stereo (256kbps MP3, Sony BMG U.S. Latin), is a simple recording -- just double bass playing a repeated ostinato as three percussionists solo: Puente, Mongo Santamaria, and Willie Bobo. That makes it easy to focus on the sounds of the different instruments. Through the HD 4.50 BTNCs, the double bass exhibited that sense of woodiness and breath that a miked double bass should have. The percussion instruments were spread across a huge soundstage, on which their aural images were tightly focused. I heard plenty of detail in the more trebly instruments, such as timbales and cowbell. So far, so good -- the HD 4.50 BTNCs bore at least a passing sonic resemblance to the other Sennheiser NC headphones I’ve tried.

Of course, “Ti Mon Bo” is much less complex and sonically dense than most of the music most people listen to. “Don’t Cry No More,” from Boz Scaggs’s Come On Home (320kbps Ogg Vorbis, Virgin/Spotify), is a little more representative of what I imagine a typical business traveler might listen to. “Clear and vivid,” I scrawled in my notes when this track first emerged through the Sennheisers. The bass and kick drum sounded tight but not lean, and the guitar solo in the middle of the tune imaged precisely and dramatically, surprising me a little as it jumped out in front of the mix. 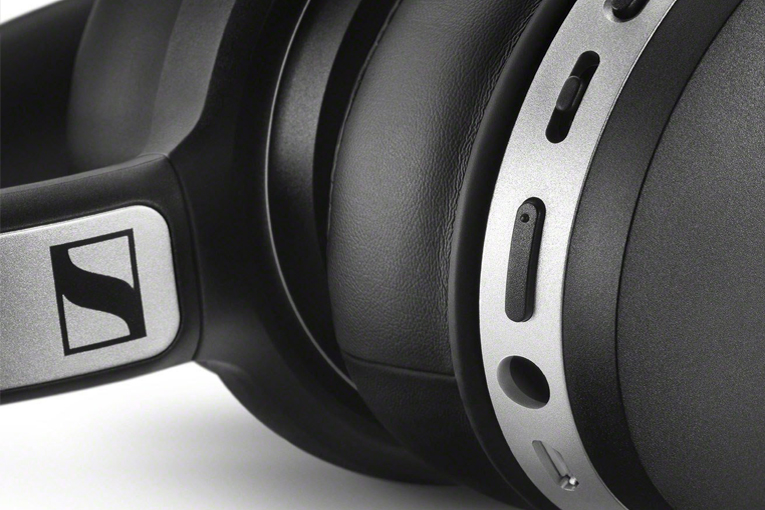 “Black Beatles,” the smash hit from the hip-hop duo of Rae Sremmurd and Gucci Mane, from their Sremmlife2 (256kbps MP3, EarDrummers/Interscope), presents challenges a little like those of “Ti Mon Bo” -- besides the voices, it consists primarily of bass and percussion. The HD 4.50 BTNCs completely nailed this cut, sounding more balanced and lively than three other headphones I compared it with: AKG’s N60 NC Wirelesses ($299.95), JBL’s E55BT Quincy Editions ($199.95), and NAD’s Viso HP50s ($249). (The NADs were connected by wire to my Samsung Galaxy S8 phone, while the AKGs and JBLs used a Bluetooth connection.) The bass in “Black Beatles” sounded huge but not overpowering through the HD 4.50 BTNCs; it didn’t obscure the other parts of the track in any way. The duo’s voices sounded very clear, and the electronic hi-hat -- probably a sample of a 1980s Roland TR-808 drum machine -- popped out of the mix purely because it sounded so clean, not because of any emphasis or boost on the headphones’ part. The soundstage, outlined by the many electronic effects, sounded colossal, seeming to fully encircle me even though it was coming from two tiny drivers pressed against my ears.

I had a tougher time figuring out how well the HD 4.50 BTNCs were nailing Corey Christiansen’s composition “She’s Gone,” from his beautifully recorded Factory Girl (320kbps Ogg Vorbis, Origin/Spotify). Unusually in a recording by a jazz guitarist, this one features big, EDM-style bass a bit like that on “Black Beatles.” This bass sounded tighter through the HD 4.50 BTNCs than through the other headphones, but also less powerful. What was the “right” sound in this case? I don’t know. But the HD 4.50 BTNCs made the snare drum sound thin, more like a piccolo snare than a standard snare. I was starting to guess that the HD 4.50 BTNCs have a subtle dip somewhere in the upper bass, and a rolloff in the deep bass. 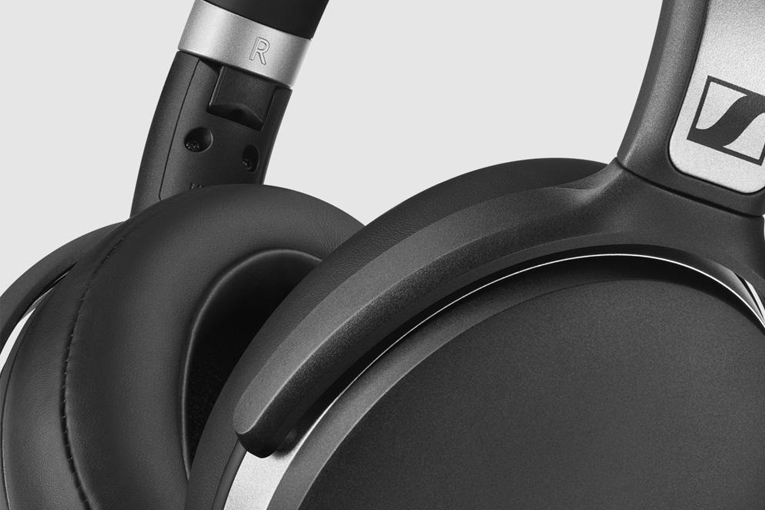 “After You’ve Gone,” from jazz singer Susie Arioli’s Spring (256kbps MP3, Spectra Jazz), sounded a little artificial through the HD 4.50 BTNCs, at least relative to what I heard from the recently reviewed JBL E55BT Quincy Edition Bluetooth (but not NC) headphones. This recording sets Arioli against complex arrangements for nine-piece band. After hearing the HD 4.50 BTNCs sound perhaps slightly bass-shy with other material, I was surprised to hear how loud and boomy the bass was relative to what I heard from the JBL and AKG headphones. The baritone sax in this track also sounded rather edgy, with an emphasized midrange (two of my friends are bari players, so I’m very familiar with the horn’s natural sound). I also thought Arioli’s voice sounded a little thinner than through the other headphones, perhaps more evidence of that upper-bass dip I thought I’d heard in the snare drum in the Corey Christiansen track.

In Anne-Sophie Mutter’s recording of the second movement of Korngold’s Violin Concerto, with André Previn conducting the London Symphony Orchestra (256kbps MP3, Deutsche Grammophon), the HD 4.50 BTNCs seemed to add just a touch of bite to the violin -- but, of course, violins often do have a bit of bite to the sound, as the bow hairs scrape across the strings. The HD 4.50 BTNCs brought the violin boldly front and center, making me feel as if I were sitting in the first row, whereas the AKGs -- which reproduced the violin with a softer sound -- gave me a more distant, reverberant violin sound. Both were nice sounds, just different. 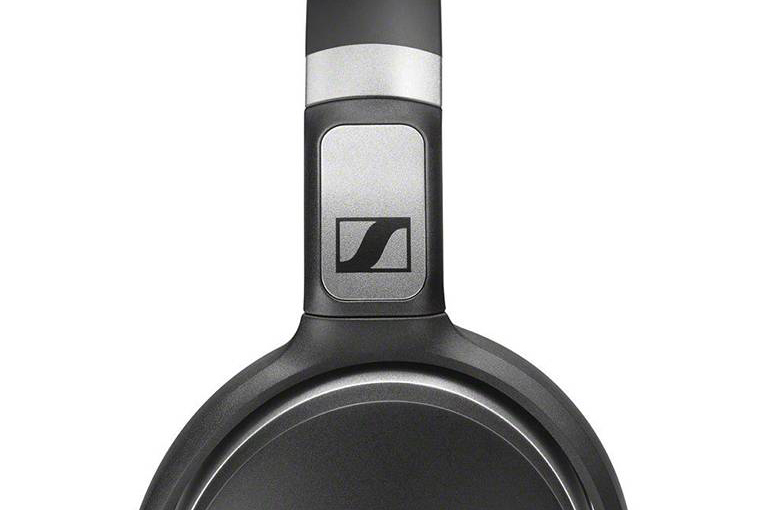 All things considered, the HD 4.50 BTNCs rank above the average of sound quality of all the other noise-canceling headphones I’ve tried -- which is almost all of them. Like all other $200 headphones, they had a few flaws, but overall, I definitely enjoyed their sound.

I’m impressed that Sennheiser was able to create noise-canceling Bluetooth headphones that are not only good, but are competitive with their other models in this category and also with more-expensive models from other brands. NC headphones are one of the few categories in which, in my opinion, there are almost no recommendable products at budget prices. The least-expensive models I like cost about $250, which would make the HD 4.50 BTNCs a very good deal even without Bluetooth.

The facts that these headphones sound great, deliver above-average noise canceling, have almost every feature most people could want, pack fairly easily into a laptop bag, and sell for what I consider the starting price for decent NC headphones, make them an outstanding buy. I suggest that you try them on before you buy them -- and because Sennheiser (unlike Fleeken, Hiearcool, and Paww) is carried by many retail outlets, an in-store trial shouldn’t be too hard to come by.