Four score and three years ago, Peter J. Walker brought forth, on the island of Great Britain, an audio company called S.P. Fidelity Sound Systems, which would later take the name Quad Electroacoustics. With its many successful products over the years -- especially the original ESL electrostatic loudspeaker (later nicknamed the ESL 57) and its derivatives -- it’s safe to say that Quad is one of the most venerable British hi-fi companies. But while in the past decade many traditional hi-fi brands have come out with headphone products, Quad’s only entry in that race has been a headphone amplifier, the PA-One. That changes with the subject of this review, the ERA-1: full-size, over-ear, open-backed headphones ($799 USD). 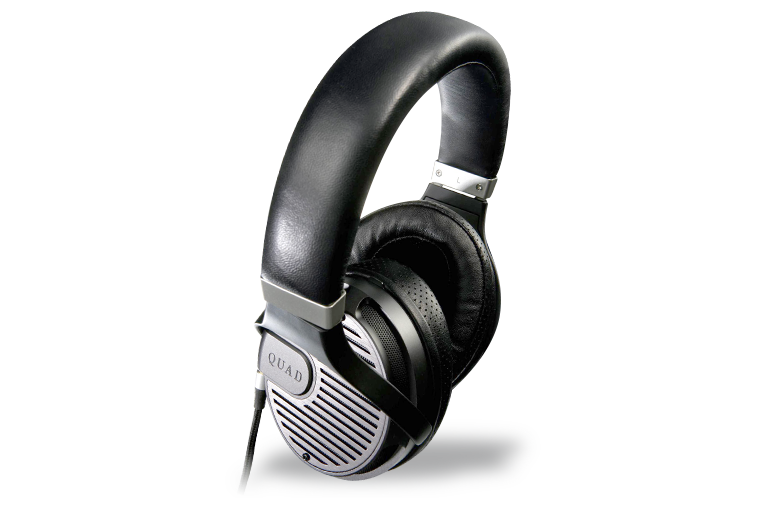 While the lighter diaphragm of the electrostatic driver should convey benefits in transient response and lower stored energy relative to a planar-magnetic diaphragm, electrostatic drivers have the distinct disadvantage of requiring the aforementioned bias voltage and a very-high-voltage audio signal -- planar-magnetic designs, on the other hand, can be driven by a conventional headphone amplifier. With a sufficiently sensitive driver, planar-magnetic headphones can even be driven by the output from a smartphone, as Quad claims for the ERA-1s. That makes planar-magnetic headphones far more convenient for most users. Quad says that the ERA-1s’ diaphragms are thinner than a human hair, and weigh less than the volume of air they displace -- though they don’t say at what signal level that might be true.

The ERA-1s are quite large -- their earcups measure 4.2”H x 3.6”W, and stick out from your head from 1.6” to as much as 2.1”, depending on which earpads are used. Despite those ample dimensions and their mostly metal construction, the ERA-1s weigh only 14.75 ounces (418gm), not including cord. For comparison, the Audeze LCD-Xes weigh well over a pound: a neck-bending 21.8 ounces (618gm). While I found the ERA-1s’ size and weight very comfortable, a female friend who tried them felt they were too big, even at the headband’s shortest adjustment.

The ERA-1s ship with two sets of earpads. One set is a squishy foam covered with velour where it contacts your head, supple sheepskin on its sides. Those pads are 0.75” thick, the space for your ears measuring 2.5” x 2.0”. The other set, of perforated leather over noticeably stiffer foam, are 0.82” thick at the front and 1.2” thick at the back. The idea is to place the drivers at an angle relative to your ears, but the execution is hampered by the headband lacking a joint to rotate from front to back. To seat the headphones properly with the leather pads, you have to push in the fronts of both earcups every time you don them; fortunately, there’s enough flex in the headband to accomplish this. Those with larger ears will appreciate the leather pads’ larger openings of 2.92” x 2.10”. 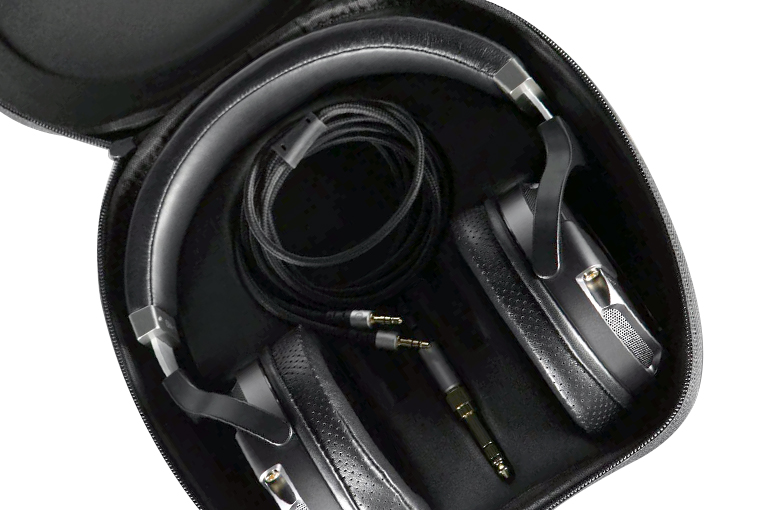 Being intended primarily for home use, the ERA-1s come with only a single cord, 82” (2m) long. It’s wrapped in fabric and appears to be of good quality, with a 1/8” stereo termination at the player end and a screw-on 1.4” adapter. A semirigid carrying case is included.

During my time with the ERA-1s I drove them directly from the output of my Moto X4 smartphone, as well as with two different headphone amplifiers: Grace Design’s m902 and Rogue Audio’s RH-5. While I could achieve adequate volume levels with the smartphone, both headphone amps provided greater dynamic headroom. Beyond that, bass was a bit more solid with the RH-5, and breathed a little more openly with the m902. The more complex systems -- including differing digital-to-analog conversion -- also resulted in subtle improvements to tonal color. If a smartphone is your primary music source for headphone listening, there’s no reason you shouldn’t consider the Quads. On the other hand, if you have a high-quality headphone setup, its additional refinements are likely to be audible with the ERA-1s.

I heard differences in the sound of the ERA-1s depending on which set of earpads I used. With the velour pads the ERA-1s had an overall warm character, with their tonal center in the midrange. Changing to the leather pads seemed to add a little more energy at both the top and bottom of the audioband. Although these differences weren’t large enough to make the Quads sound like two entirely different pairs of headphones, I found them significant enough that describing just one sonic signature or the other wouldn’t adequately convey the ERA-1s’ sound.

Beginning with those warm middle frequencies: While still clear and lovely, Carolyn Sampson’s voice in her A Soprano’s Shubertiade, a collection of Shubert lieder (24-bit/96kHz FLAC, BIS/eClassical), was a little darker that I’m accustomed to hearing it. Congruently, Joseph Middleton’s piano on the same recording had a golden tone that favored the middle of the keyboard, yet remained articulate. Similarly, in Camille Thurman’s Waiting for the Sunrise (24/192 AIFF, Chesky/HDtracks), Thurman’s voice had a slightly lower tonal center than usual. With the velour pads, her tenor saxophone was extra mellow; the leather pads added more of the upper harmonics that remind one that a saxophone is made of metal, while still avoiding excessive spittiness. 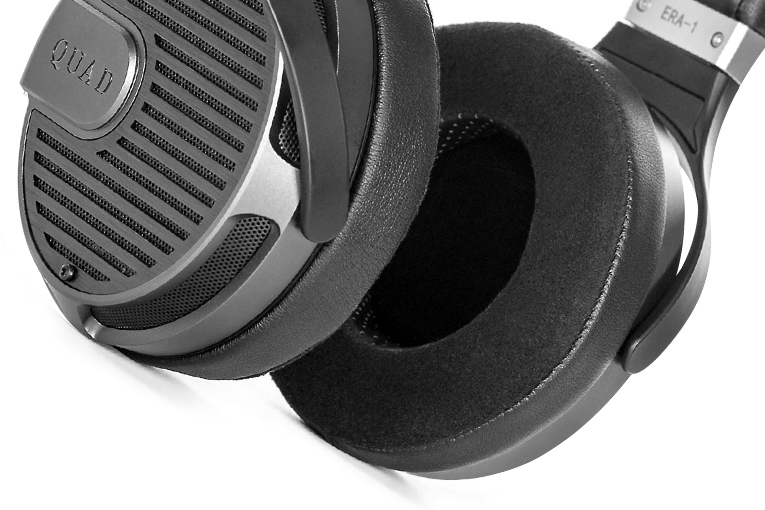 With the leather pads in particular, any reticence was likely to be restricted to the lower treble -- the Quads delivered brilliance from the louder brass passages in Michael Tilson Thomas and the San Francisco Symphony’s recording of songs by Gustav Mahler, sung by Susan Graham and Thomas Hampson (16/44.1 FLAC, San Francisco Symphony). Likewise, while the ride cymbal and hi-hat on Waiting for the Sunrise didn’t sound quite like the real thing, they did sound distinctly metallic, with crisp, clean attacks of stick on brass. In fact, when I listened to Miles Davis’s On the Corner (320kbps OGG/VORBIS, Columbia/Spotify) with the leather pads, the cymbals and other percussion actually had a bit too much energy, and were ultimately somewhat fatiguing. (I don’t know the provenance of this version of On the Corner, but the sound suggests it may have been from an early digital transfer. Although I did occasionally notice this excess energy in the mid-treble, I didn’t find the ERA-1s fatiguing with well-recorded and/or well-mastered music.)

The greatest tonal difference between the two sets of earpads was in the bass. With the velour pads, Daryl Johns’s bass on Macy Gray’s Stripped (24/192 AIFF, Chesky/HDtracks) was woody, resonant, and fairly well defined, if still a little thick in its lowest notes. With the leather pads, by contrast, it went noticeably deeper, but lost some weight and definition. I had similar results with the Mahler recording -- the velour pads more closely resembled what I hear in a dry auditorium; the leather pads were more akin to how basses sound in a reverberant hall. 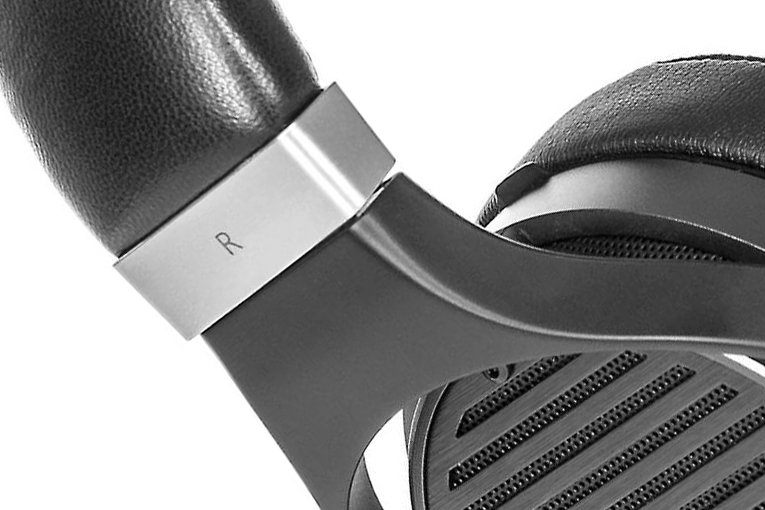 The other significant difference between the two sets of earpads was in their portrayals of soundstages. With the velour pads, the ERA-1s conveyed instrumental positions from left to right, but the sizes of the aural images and the sense of depth were only average. Switching to the leather pads increased the width of the soundfield, and especially its depth. On Stripped, which was binaurally recorded, Wallace Roney’s trumpet came from somewhat to the right of and out in front of me. With conventionally recorded albums, such as the Mahler, I heard explicit layering within the orchestra, from strings in the front to brass and percussion at the back, and the singers spotlit at center stage. 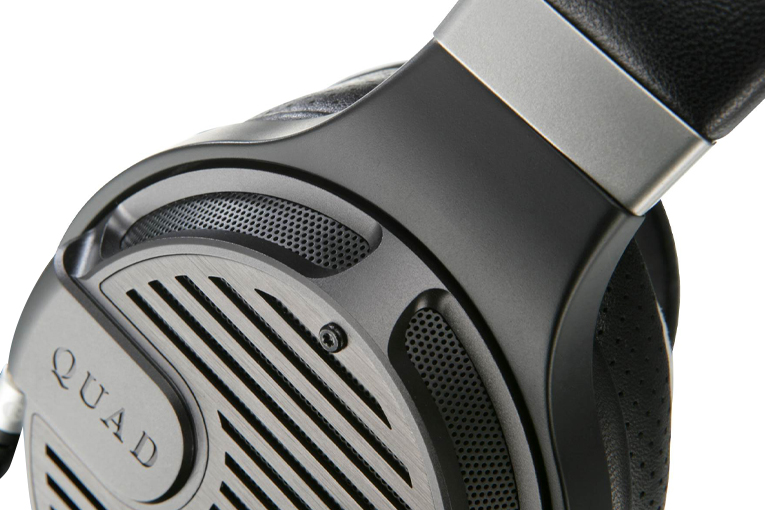 Regardless of which sets of pads I used, the ERA-1s made it easy to distinguish small details, such as the clinking of the heating system in Toronto’s Church of the Holy Trinity in “Mining for Gold,” from the Cowboy Junkies’ The Trinity Session (16/44.1 FLAC, RCA). Indeed, the quick response of the ERA-1s’ drivers and open-back design also helped them do an exceptional job of tracing the shapes of notes. For example, the opening piano notes in Schubert’s “Viola,” from Carolyn Sampson’s recital, each had a bell-like quality: a slightly rounded attack, a full body, and a natural decay.

I compared the Quads with the only currently available planar-magnetic headphones I had on hand -- the twice-the-price Audeze LCD-X ($1699). I’ve already remarked on the substantial weight difference between these two sets of cans. Add in the greater clamping pressure of the LCD-Xes, and I can’t imagine anyone not finding the ERA-1s more comfortable. The frequency response of the Audezes is in the ballpark of what I consider neutral, with a bit of treble rolloff. They certainly aren’t as warm as the ERA-1s with the velour pads, but don’t have as much mid-treble as the Quads with the leather pads. The LCD-Xes also produced more robust bass than the ERA-1s, which many listeners will prefer.

Though both headphones are open-backed, the ERA-1s sounded more open than did the LCD-Xes -- they put more space around voices and instruments, but sounded less dense. Oddly, though the LCD-Xes’ sensitivity is higher -- it took less voltage to get them to play at a given level -- the ERA-1s seemed to have the edge in quick, precise response to the input signal, uncovering a smidge more detail.

The Quads were also listened to by our usual listening panel: SoundStage! Solo editor Brent Butterworth; John Higgins, who holds a master’s in music performance from USC and has been a frequent contributor to Wirecutter and Sound & Vision; and LeRena Major, a Los Angeles saxophonist who’s held several positions in the music business and is a voting member of the National Academy of Recording Arts & Sciences. All three commented on how comfortable they found the ERA-1s’ light weight and low clamping force.

Brent ended up preferring the clarity offered by the slightly increased treble of the leather pads, along with their soundstaging abilities; he felt the velour pads sounded a bit soft. LeRena agreed that the velour pads started out sounding soft, but she quickly adapted to them, and liked their overall balance and increased bass relative to the leather pads -- she found the latter a little blaring with some material at higher volumes. Of the headphones she heard in this grouping -- which included the Audeze LCD2 Closed-Back, Cleer Next, Fostex T60RP, and HiFiMan HE6se -- LeRena liked the Quad ERA-1s best.

John listened to the Quads only with the leather pads. Though he thought the lower midrange slightly obscured, and wanted a bit more low-bass response, John liked the ERA-1s overall, and felt their treble avoided excessive sibilance. Brent summed it up well: “I like that the two sets of pads give different and viable listening options. It’s not that one set makes the headphones unlistenable -- they’re both good for certain tastes.”

The headphone market is crowded enough that there are many choices of headphones costing less than $1000, even if you restrict your search to planar-magnetic designs. Standing out requires more than just bearing a well-recognized brand name. Fortunately, the ERA-1s have more to offer than the Quad badge. Most listeners will probably be pretty happy with one of the two available sound signatures, and with your purchase you get both: just swap earpads. Either way, the ERA-1s’ levels of clarity and openness are above those of many of their competitors. But perhaps what’s most appealing about the Quad ERA-1s is that you get this quality of sound in a lightweight and comfortable pair of headphones that you can wear for hours. It may have taken Quad a while to launch their first pair of headphones, but now that they’re here, they’re well worth a listen.