HiFiMan Edition X measurements can be found by clicking this link.

I can’t believe I’m reviewing $1799 headphones that are considered a step-down model. The HiFiMan Edition X is a less-costly version of HiFiMan’s flagship headphones, the HE1000s ($2999), which I recently reviewed and truly loved. Except for color and materials, the Edition Xes look almost identical to the HE1000s, but they’re intended as a more practical product. Not only do they cost $1200 less, they’re touted as being sensitive enough that any smartphone can drive them.

Not that you’d probably want to take your Edition Xes on a plane or subway -- their open-back design provides almost no isolation from external sounds. Still, they fold flat enough to slip between a couple of shirts in your suitcase, so it’s easy to imagine taking them along on a weeklong business trip with nothing but a smartphone to drive them. I can think of few better respites from a day full of business meetings than great headphones and my favorite music. 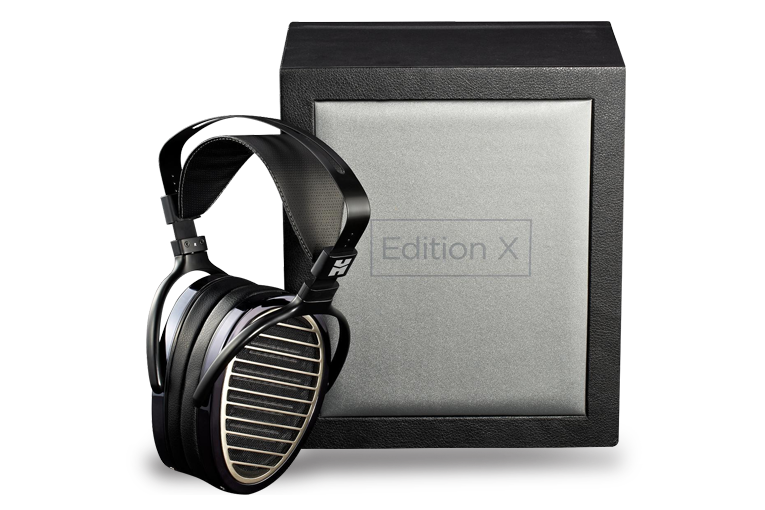 The Edition Xes benefit from many of the design twists that made the HE1000s sound so great. The ultrathin diaphragm used in their planar-magnetic drivers should deliver better, more delicate high-frequency response than can thicker diaphragms. And the minimalist, “window shade” grilles of their earcups allow much freer airflow than do typical perforated metal grilles, and should thus reduce the reflection of sound back toward the drivers and your ears.

Like most other HiFiMan open-back headphones, the Edition Xes come in a big, elegant storage box. Given these ’phones’ practicality for travel, I wish they also came with some kind of protective carrying sack, but I’m sure your local outdoors store has a stuff sack in which they’ll fit. 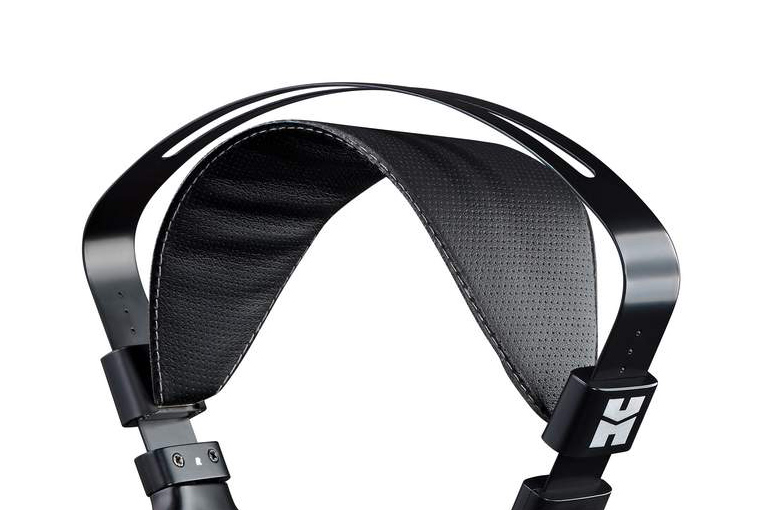 About 20 years ago, a speaker designer whose name I can’t remember told me something surprising and enlightening. Basically (I paraphrase), he said, “Sensitivity isn’t free. To make a speaker more sensitive, you probably have to sacrifice performance in some other area.” As I saw it, my task with the Edition Xes was to find out how much more sensitive they are than the HE1000s, and to see if the sacrifices HiFiMan made to get the greater sensitivity were worth it.

While the HE1000s just barely work when driven by a typical smartphone, the Edition Xes worked pretty well. With music produced with a great deal of dynamic-range compression, the Edition Xes played more than loud enough when powered by my Samsung Galaxy S6 phone. “A City in Florida,” from Deadmau5’s 4x4=12 (256kbps MP3, Ultra), sounded 4 or 5dB too loud through the Edition Xes when I cranked it up full blast -- and I usually listen to this tune at pretty high levels. However, classic rock tunes, which were typically mastered with much less compression than more modern mixes, didn’t sound so powerful through this rig. “Houses of the Holy,” from Led Zeppelin’s Physical Graffiti (256kbps MP3, Atlantic), played just loud enough with the Samsung’s volume at max. 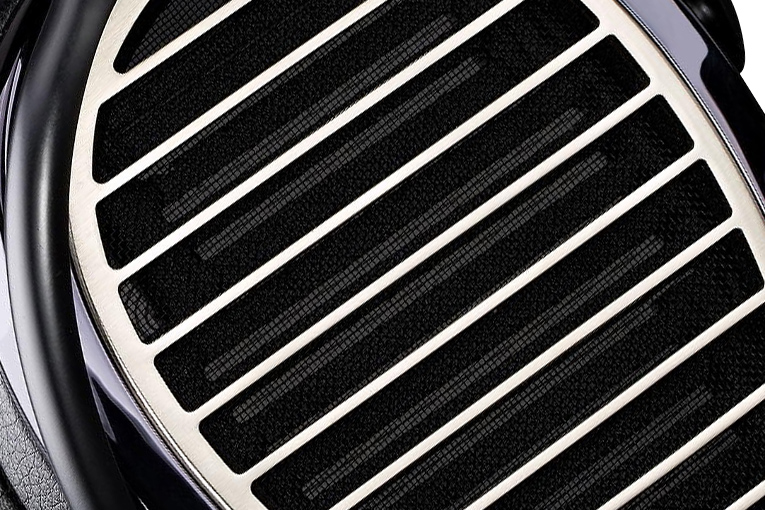 I was excited to hear a clue in “Houses of the Holy” that treble detail, one of the hallmarks of the HE1000s, is also amply present in the Edition Xes’ sound, and that the detail is achieved through higher sound quality, not phony-sounding treble emphasis. Throughout this song -- and much of the material recorded for Houses of the Holy -- drummer John Bonham’s bass-drum pedal squeaks. Audio gear that exhibits softened treble response -- including many speakers and headphones of Led Zep’s era -- makes the squeak hard to hear. Systems with amped-up treble make the squeak extremely annoying. With the Edition Xes, the squeak was an audible but not obnoxious flaw. The rest of Bonham’s drum kit sounded just about right, and Jimmy Page’s overdubbed electric guitars slashed through the mix without blaring or grating on my ears.

Softer material revealed more of the Edition Xes’ quality. I loved the natural sense of space they delivered when I played Valerie Joyce’s spare but gorgeous rendition of the jazz standard “But Beautiful” (2.8MHz DSD, Blue Coast) through the Aurender Flow headphone amp-DAC. The HiFiMans revealed the noise of guitarist Marco de Carvalho’s fingers and nails plucking his instrument’s nylon strings, and Joyce’s soft, skillfully controlled breathing between lines, yet neither guitar nor voice seemed emphasized or edgy in any way, as they often do through headphones lauded for their “detail.”

When I listened to my new favorite pop group, Haim, through the Edition Xes, I gained a new appreciation for the quality and care put into their recordings. “If I Could Change Your Mind,” from Days Are Gone (256kbps MP3, Columbia), sounded so deep and lush -- better, I bet, than what the group experienced when they heard the playback on the studio monitors. The Edition Xes revealed minute details I’d previously missed, such as a strange-sounding tambourine buried deep in the mix during the chorus. (I still can’t tell, though, whether it’s a toy tambourine or just a weirdly EQ’ed standard tambourine.)

“Sogononkoun,” from Dunnun Kan, a recording by Mangue Sylla and the All-Star Drummers of Guinea (24/96 FLAC, Chesky JD373), revealed the similarities between the HE1000s and the Edition Xes. Both models captured the realistic, enveloping sense of space that highlights every Chesky recording I’ve heard. In fact, I’d say the differences in the models’ reproductions of space were in this case so insignificant as to be nearly imperceptible. That’s not to say the Edition Xes were equivalent to the HE1000s -- the cheaper model’s treble wasn’t quite as smooth and delicate. “The HE1000s just sound more natural,” I noted. I also compared both HiFiMan models with another open-back planar-magnetic design, the Audeze LCD-Xes ($1699); the Audezes’ treble was slightly mellower, which gave them a more robust sound but also reduced the sense of spaciousness I heard from the HiFiMans. 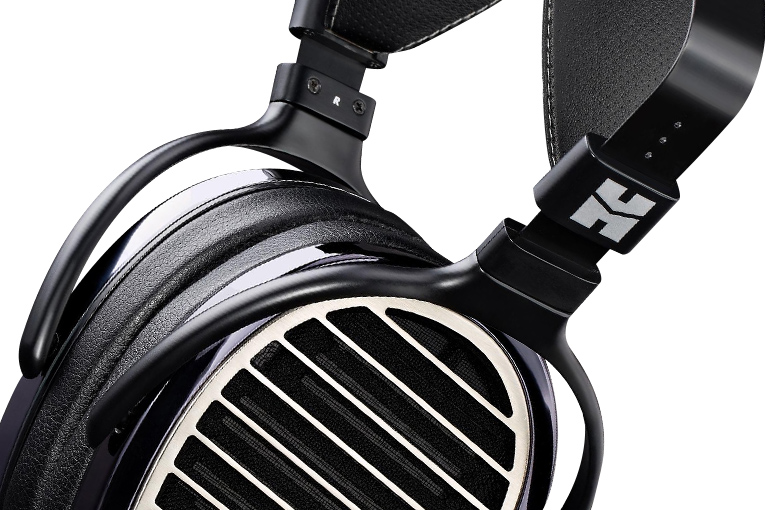 The prog-rock classic “Long Distance Runaround,” from Yes’s Fragile (24/96 FLAC, Atlantic), revealed a character in the Edition Xes that the HE1000s and LCD-Xes seemed to lack: a slight resonance, or “hump,” in the bass that I heard during the verses. This characteristic is found in most headphones’ sound; it gives the bass a tad more kick, but makes it sound a little less smooth and natural. (Interestingly, no bass hump showed up in the measurements, though the character of the Edition Xes’ response in other parts of the tonal spectrum could have made it sound as if it had a bass hump.)

To my ears, the obvious difference between the Edition Xes and the HE1000s was in the treble. So I put on “Airpower,” from Larry Coryell and Philip Catherine’s Twin House (16/44.1 WAV, Wounded Bird), an album of acoustic-guitar duets that’s especially revealing of treble quality. The HE1000s got “Airpower” pretty much right, with extremely clear but not overemphasized sounds of picks on strings, and fingers sliding up and down fretboards. The guitars’ bass notes also sounded wonderfully resonant through the HE1000s; I got a real sense of the instruments’ soundboards vibrating. “It might be just a tad bright, but it still kicks ass,” I wrote in my notes. The Edition Xes had a similar tonal balance and spatial presentation, but their treble didn’t sound quite as clear or detailed. The Audeze LCD-Xes sounded less spacious and softer than either HiFiMan model, but this gave them a more robust and even more kick-ass sound. For this comparison I also pulled out the HiFiMan HE560s ($899) -- their tonal balance was as neutral as that of their more expensive stablemates, but their treble was less refined and smooth than the Edition Xes’, and much less refined and smooth than the HE1000s’.

To me, the HiFiMan Edition Xes’ biggest competitors are the two other headphones most often mentioned in this review: the HiFiMan HE1000s and the Audeze LCD-Xes.

The LCD-Xes and the Edition Xes are about the same price. They’re both great, but they’re for different buyers. To my ears, the Edition Xes have stronger treble response and a more compelling sense of space -- more of a typical audiophile-oriented sound -- while the LCD-Xes have a more robust sound that might lend itself better to a broader range of music. Both can be driven directly by a smartphone, but the Edition Xes are far lighter and more portable.

The HE1000s cost $1200 more -- that’s 67% more -- than the Edition Xes, with essentially the same design. I thought the HE1000s sounded better -- smoother, more natural -- than the Edition Xes with every recording I played. The difference in sound quality is substantial; whether it’s worth $1200 is up to you. If you demand the best, the HE1000s are the wiser choice. If spending $3000 on headphones is a stretch for you, the Edition Xes are the better pick, especially considering that you don’t need to buy or carry a separate amplifier or a high-priced portable music player to use with them. Just plug ’em into your smartphone or tablet and you’ll get fantastic sound with zero hassles.