The Shocking Truth About Truck-Stop Earphones

Some stories spring from surprising origins. About a decade ago, I was riding in the back of the car with my family on Interstate 10 from Houston to New Orleans—a journey that would intrigue only those with a fetish for swamps or oil refineries. Tired of whatever my dad was listening to on the radio, but having forgotten to bring headphones with me, I grabbed a $10 set of off-brand earphones at a truck stop near St. Charles, Louisiana.

To my surprise, they weren’t bad. They had what seemed to be a pretty conventional frequency response, and they came with large silicone tips that fit my ears perfectly. This made me wonder: how was it that a $10 set of earphones could work so well when many high-end earphones—some priced over $1000—frustrate me with fit problems, frequency-response quirks, and an inadequate supply of tips? 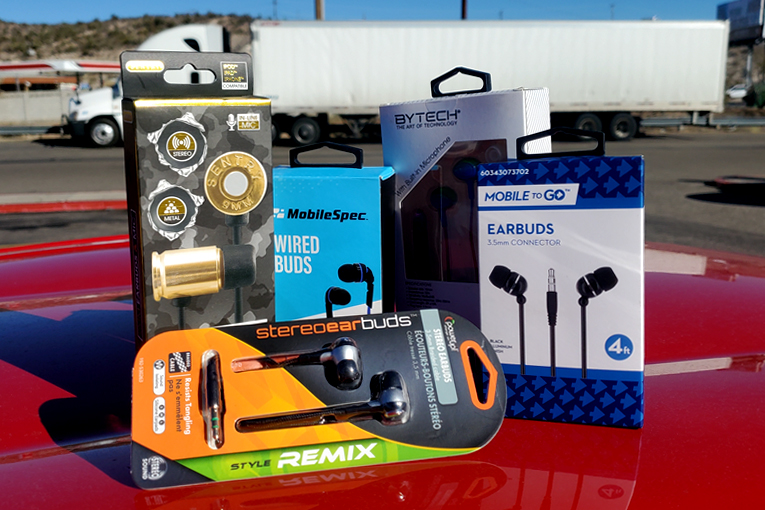 Only someone who broke or lost or left behind their earphones would buy new ones at a truck stop. So truck stops present a great distribution opportunity for obscure brands that would never have a shot at, say, Best Buy, where the shopper will likely be more discerning. I’ve never seen these brands reviewed or even mentioned in the audio press, so when I recently had a chance to spend seven days on the road driving up from Los Angeles to Denver, down to Houston, and back to L.A.—with a detour to Las Vegas for CES—I thought I’d dig a little deeper into the unexplored mysteries of truck-stop earphones.

I had to set some rules. First, wired earphones only—no headphones, no Bluetooth. Second, each set of earphones could cost at most $10. Third, they had to be purchased at actual truck stops, which I defined as places with clearance for semis and showers for rent. At the end of the trip, I’d listen to the earphones, measure them, and see what happens.

My collection included the Bytech Universal Stereo Earbuds, MobileSpec In Ear Buds, PowerUp Remix Stereo Earbuds, and Sentry 9mm Earbuds. There was a fifth set, the Mobile to Go Earbuds, which you can see in the “action shot” taken on the roof of my car, but I think I inadvertently left them on the car roof, so they probably ended up in the parking lot of the TA Travel Center in Kingman, Arizona. Which means someone got a free set of earphones—but as it turns out, that might not have been the bonanza it seems. 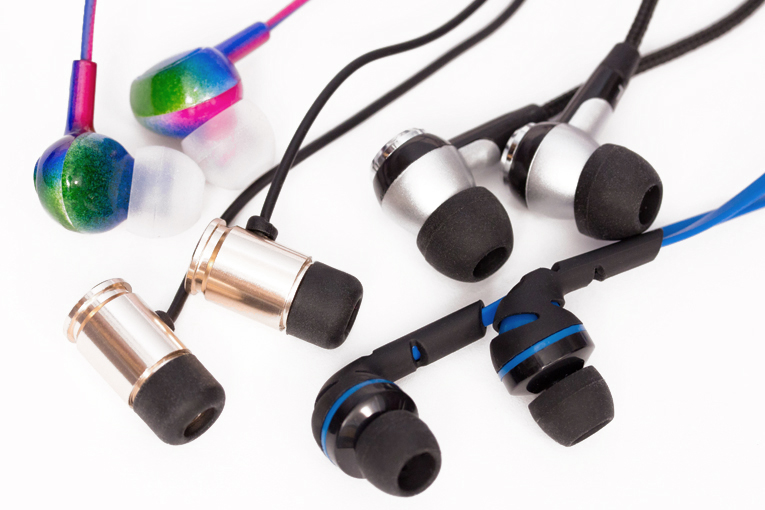 I began this audio journey with high hopes, based on my positive experience with truck-stop earphones a decade ago. So I originally thought I’d start with Tracy Chapman’s “Fast Car” (Tracy Chapman, 16-bit/44.1kHz, Elektra/Qobuz) and then move on to more diverse fare—but it turned out one verse of “Fast Car” was all I needed to make a complete assessment of these earphones.

Here’s my rundown. In every case, I used my favorite SpinFit CP100 XL-size silicone tips to get the best possible fit and sound.

Bytech Universal Stereo Earbuds: Things got off to a fairly promising start with these earphones, which feature an inline microphone and a flirty blue/magenta/green color scheme that seems out of place in a truck stop. So perhaps I need to discard some of my apparently outdated biases about truck stops. Anyway, the “handed” design, with mirror-imaged molds for the left and right earpieces, gave the Bytechs a wonderfully secure and comfortable fit. Sadly, the wonders ended there. The Bytechs sounded like a speaker draped with a blanket—audible, kinda listenable, but soft. Tracy Chapman’s voice was somewhat muffled, and the acoustic guitars lost all their twang. With some work from a talented tuner—I’m lookin’ at you, Sandu Vitalie!—these might be great budget earphones.

MobileSpec In Ear Buds: I recently read that turtles can hear up to only 1kHz. That would make them one of the few creatures that might enjoy the MobileSpec earphones—if turtles had ear canals to put them into, which they don’t. I’m not exaggerating when I say these earphones sound like a speaker smeared with mud and then placed under a heavy pillow. Or like music pumped through an old bass amp with a 15″ speaker. There were no highs at all. Honestly, I can’t ever remember hearing audio this bad before. But I should praise MobileSpec for one thoughtful touch: they’re the only brand that includes a drawstring pouch for storage, so the earphones won’t make a tangled mess when you toss them in the trash.

PowerUp Remix Stereo Earbuds: A student of Eastern religion might call the PowerUps the yin to the MobileSpecs’ yang. Or more likely, they’d ask, “Why do you insist I listen to this crap?” The PowerUps have very little bulk, but they sport long sound tubes, so it was difficult to get a tight seal even when I used the XL SpinFit tips. With these earphones, I got almost no bass; the low notes I did hear sounded like harmonics two octaves above the fundamental. Possibly as a result of the muted bass, the mids and highs were bright and harsh. It sounded kind of like if you were to put a tiny Bluetooth speaker inside a tennis ball can and then put the can up to your ear.

Sentry 9mm Earbuds: I eagerly anticipated hearing these earphones—styled to resemble shell casings from a 9mm pistol—because they look like a 21-times-cheaper version of the surprisingly excellent Munitio Nine earphones. They even have primers, which I prayed weren’t real. I’m sure they’re not, though. I’m pretty sure, anyway. Wait, where are these earphones from again? Oh well, I digress. Sadly, the Sentry earphones were no Nines. They were more like .22 shorts. They sounded dull in the 3kHz range, which made Tracy Chapman’s voice sound muffled, but they seemed to have a big peak around 5 or 6kHz, which gave the vocals a nasty buzz on top and made the acoustic guitars sound like cheap, plywood toy guitars.

It’s challenging even for skilled technicians to tell how earphones sound from the measurements alone. But I can tell poorly tuned junk when I see it, and brother, did I see it when I ran the truck-stop earphones past my GRAS 43AG ear/cheek simulator for some frequency-response measurements.

I dropped a measurement of the AKG N5005 earphones in here so you’d have a baseline for comparison; the N5005s are said to be the passive earphones that most closely track the Harman curve. Now, I’ve seen some wacky-looking frequency-response curves in my dozen or so years measuring headphones and earphones, but I can’t recall ever seeing a collection of curves this wacky. In some cases, it appears the earphones weren’t tuned at all—I’d guess the enclosures were designed according to cosmetic dictates, the drivers were popped in, and sound quality received no thought at all. 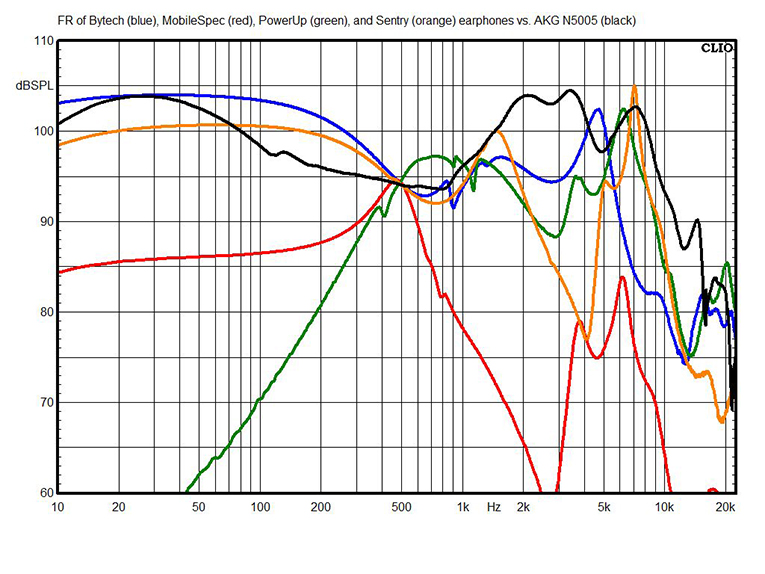 What you see here are the right-channel responses—but with a couple of the earphones, the right and left channels showed a huge mismatch. That resonance you see in the Sentry 9mm earphones at 1.5kHz moved down to 530Hz in the left channel. With the Bytechs, the left channel’s curve shape was somewhat similar to the right, but 3 to 5dB more sensitive depending on frequency. Ironically, the two worst-sounding models—the MobileSpec and PowerUp earphones—had nearly perfect channel matching. Which I’d say is good, but who knows—they might have actually sounded better with mismatched channels.

I will say, though, that I was surprised when my measurements showed that the relative phase of the channels was consistent in all of these earphones—something that has only a 1-in-16 chance of occurring at random. Cheap earphones and headphones are notorious for having a random phase relationship between the channels, and if the phase is flipped on one, you’ll get a spacey, disembodied sound. So it seems that whatever factories these came out of are at least getting that right.

Of course, one might reasonably accuse me of punching down here—after all, how good could $10 earphones be? But in my time spent on Wirecutter’s headphone listening panel, I have encountered $10-ish earphones that were quite listenable—Panasonic’s ErgoFit RP-HJE125K, for one. I keep a set of these in my car for those times when I end up with a long, unexpected delay or waiting time, and while they’re a little on the bassy side, they blow away all the truck-stop earphones I found on this trip. 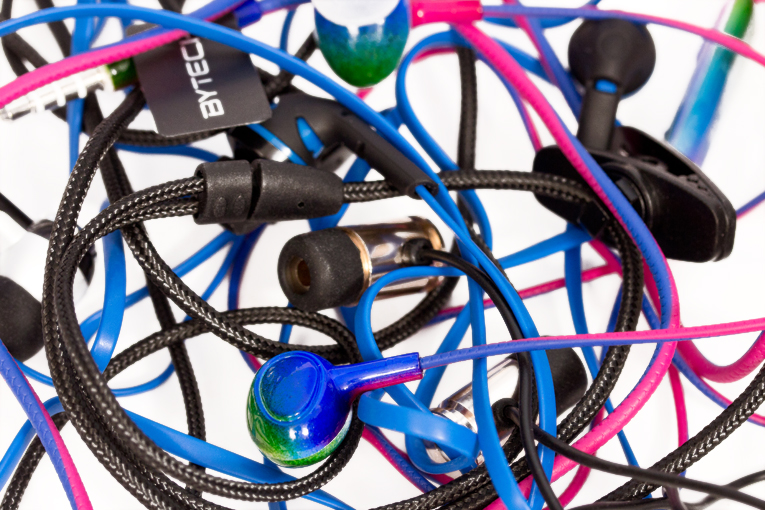 I have to point out, too, that if I were actually reviewing the MobileSpec and PowerUp earphones, they’d both get ratings of 1 for sound and value. That means, quoting from our published explanation of our ratings, that the earphones are “dysfunctional, can’t be said to fulfill their stated purpose” and “a total, obvious rip-off no one on Earth should buy.” Sure, we’re talking cheap earphones sold at a truck stop, but still, I can’t help being appalled that some companies are marketing audio products this bad.

So if you find yourself out on the road and desperate for tunes, hold out for a town big enough to host a Target or Walmart, and grab yourself some name-brand cheap earphones. And when you’re at a truck stop, feel free to indulge in an amusing bumper sticker or the consistently good and fresh coffee, but steer clear of the earphones.