Do We Really Need All These Target Curves?

I should have expected this. The original paper that eventually resulted in the Harman curve was published ten years ago. Like practically every paper on audio that takes a strong stand, it was met with a mixture of praise, scorn, and indifference. Now others are responding by suggesting their own alternatives to the Harman curve—and headphone enthusiasts are left scratching their heads, wondering which, if any, of these will agree fully with their own ears.

I’m aware of five different published modern, basic headphone target curves, although some of them have variants, and I know manufacturers all have target curves of some sort, even if they’re not published. (If you like, you could throw in the free-field and diffuse-field target curves, too, but they’re considered obsolete for the most part.) I hope the originators of these five curves will pardon any oversimplifications in my following brief synopses. Let’s begin with a chart I’ve concocted that compares these curves; the versions of the curves here are all intended for earphone voicing. It’s a relatively low-resolution chart that I created by hand, based on charts I’ve seen of the different curves. 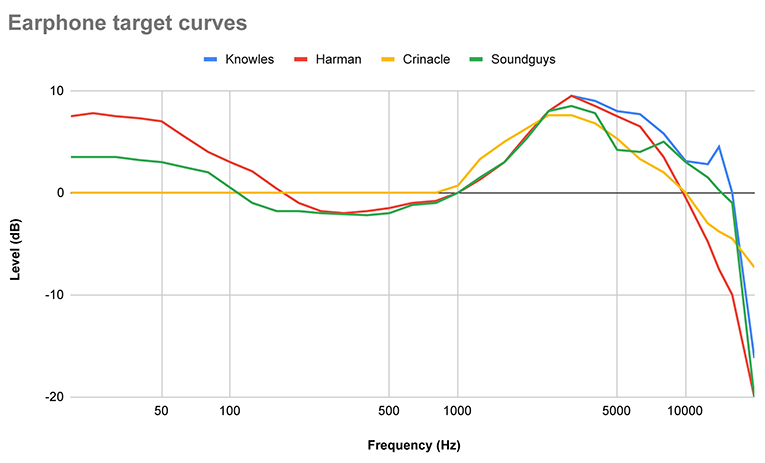 First and foremost is the Harman curve, the product of a research project by Harman International that resulted in 19 papers and has been adopted in headphones from all the Harman brands (AKG, JBL, Harman/Kardon, and Mark Levinson). It was originally based on the sound of a good loudspeaker in a good-sounding room, and modified through extensive user-preference research. Many other manufacturers—including 64 Audio, Dan Clark Audio, PSB, and Puro—have spoken either of the Harman curve’s influence on their work, or of the similarity of the results of their own research to the Harman recommendations. A few audio publications use the Harman curve as a standard to judge headphones, under the notion that headphones and earphones that stick close to it are good, and models that stray significantly from it are not recommendable.

The Preferred Listening Response Curve from Knowles, a major manufacturer of miniature speakers (i.e., headphone drivers) and microphones, is basically an update of the Harman curve. The Harman curve was produced using headphone measurement gear designed to the original IEC 60268-7 standard, which delivered valid and consistent results up to only 8kHz. But five years ago, headphone-measurement gear manufacturers introduced “high resolution” ear simulators that produce consistent measurements up to 20kHz, or even higher. Knowles has used this equipment to conduct additional research that modifies the Harman curve with elevated treble levels above 3.5kHz. (You can download a white paper on the Knowles curve here.) 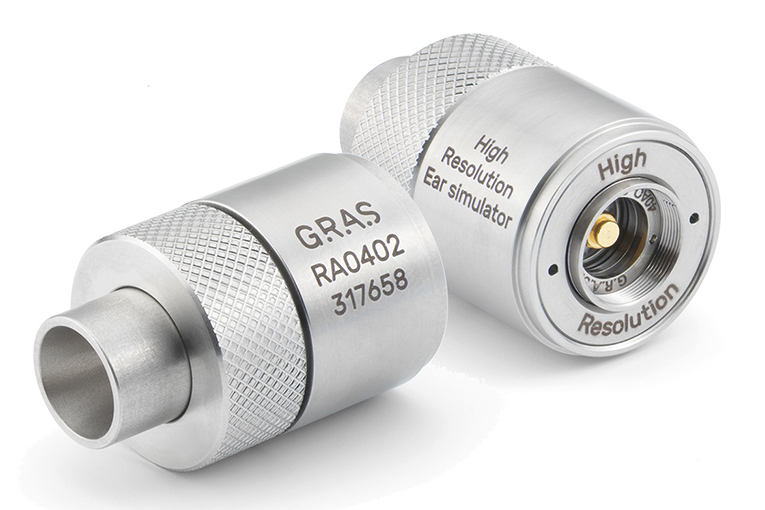 The Crinacle IEM Neutral Target is the creation of audio reviewer and consultant Crinacle. It is the product of his experience in reviewing and his perhaps-unmatched database of earphone measurements. As he describes it, the IEM Neutral Target is what he considers to deliver a “perceptibly neutral” response. I recently reviewed an earphone design that Crinacle voiced, and you can read my comments about the sound in that review.

Next up is the preference curve used by Soundguys, an audio-review site. I gather from reading the site that it represents an adjusted average of responses of headphones and earphones liked by the staff, and adapted to their specific measurement gear. As best I can tell (I don’t know how the compensations they made affect their curve), it’s somewhat similar to the Harman curve, but with less emphasis in the treble and bass (or more in the midrange, depending on how you want to look at it).

Last—because it’s the most recent to emerge—is Sonarworks SoundID SR, the creation of a company that makes calibration technology for headphones and studio monitor speakers. (I reviewed the Sonarworks headphone calibration software four years ago.) The notion is similar to that of the Harman curve, which used as its initial target the sound of a good set of speakers in an acoustically good room of the type that might be encountered in a typical home. Sonarworks proposes instead the target of a calibrated set of speakers in a well-designed studio control room. It also proposes that, because headphone measurements are to some degree inaccurate and inconsistent, all measured headphone responses should be confirmed by a panel of five listeners (either the manufacturer’s own panel or Sonarworks’ panel), comparing them to a set of calibrated studio monitor speakers. It also suggests that manufacturers should feel free to deviate from this curve as they see fit, but that their variance from the curve should be documented. 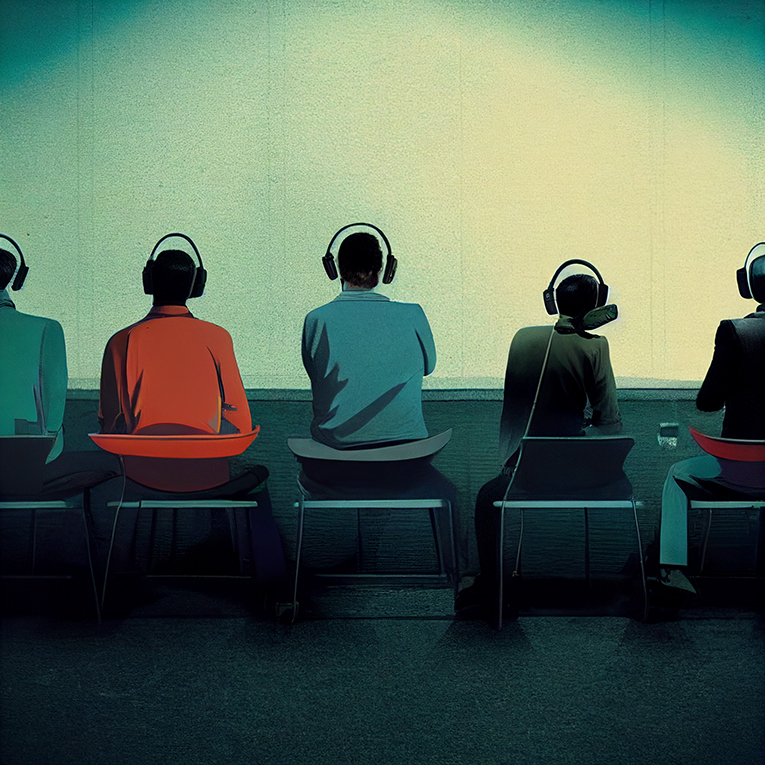 By now, you may be wondering which of these curves I endorse. The answer—and this has always been official policy at SoundStage! Solo—is none of them. I once proposed, at the suggestion of some readers, to reference all of our headphone measurements to the Harman curve, but SoundStage! founder Doug Schneider shot that idea down, and I’m glad he did. “How can we say that every other manufacturer should conform to Harman’s curve, no matter how good their research is?” he asked me, and I couldn’t make the case. I do, though, include in every comparison chart a measurement of a similar headphone or earphone that comes close to the Harman curve.

I heard two comments at the recent 2022 CanJam SoCal headphone show that confirmed my thoughts on this matter. One was from Dan Clark of Dan Clark Audio, describing how he voiced his new Expanse high-end headphones—with, as he explained thoroughly, a little more upper bass and a little less treble than the Harman curve. He made a strong case for his strategy, but more important, the Harman curve provided a basis for our discussion. It’s something both of us understand well, that we respect even though we don’t use it as a substitute for our own judgment.

The other comment came from a fellow headphone reviewer, someone who doesn’t do measurements but who nonetheless possesses a solid technical understanding of audio. Of the Harman curve, he said, “I wouldn’t say it’s perfect, but it’s a reasonable reference.” 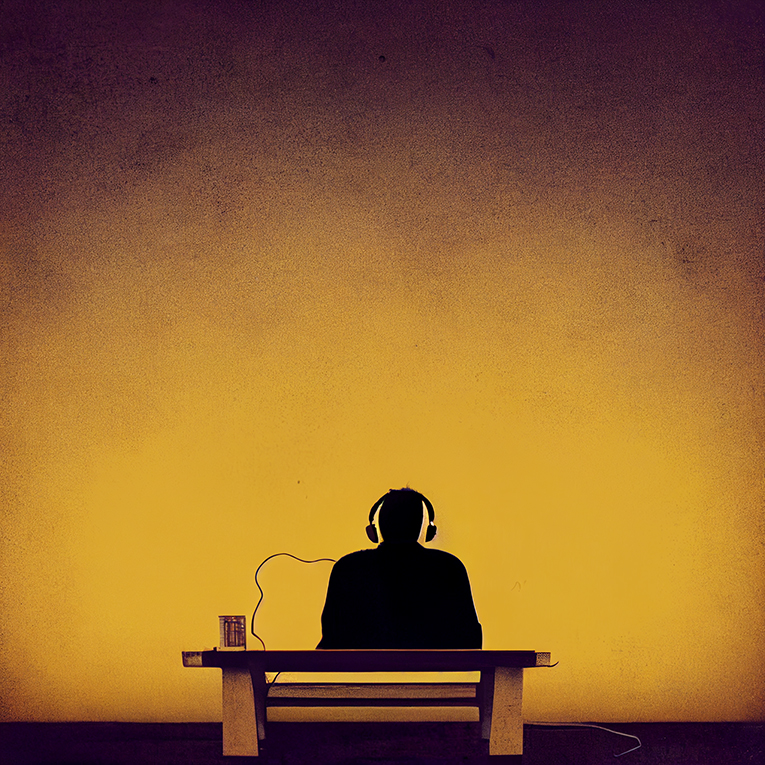 Whether or not any of these target curves square with your own perceptions and opinions about sound is something only you can judge. Personally, I’ve found I can enjoy quite a few headphones and earphones that stray from industry convention in certain ways. But even though not every Harman-curve headphone has ranked as one of my favorites, I haven’t disliked any of them, and I’m thankful to have it as a “reasonable reference” that I can use in my work.