When Is the Amp Important?

Numerous as misunderstandings are in the world of audio, I’d guess that in consumer audio, there’s nothing more misunderstood than the amplifier. I think that’s because many audio aficionados base their understanding of amps less on technical knowledge than on what they’ve read in subjective reviews, where writers—almost none of whom possess substantial knowledge of amp design—are typically encouraged to sling exaggerated, exotic adjectives to make what’s often a rather generic product sound like a transformative experience.

Let’s look at two extreme, obvious examples of an amp mattering or not—and then seek out some practical guidelines I hope headphone enthusiasts, at least, will find useful.

A few days ago, I noticed a comment on one of my articles that really ticked me off. It’s not the commenter who ticked me off, though—it’s the writers and manufacturers who, either willfully or ignorantly, misinformed them. 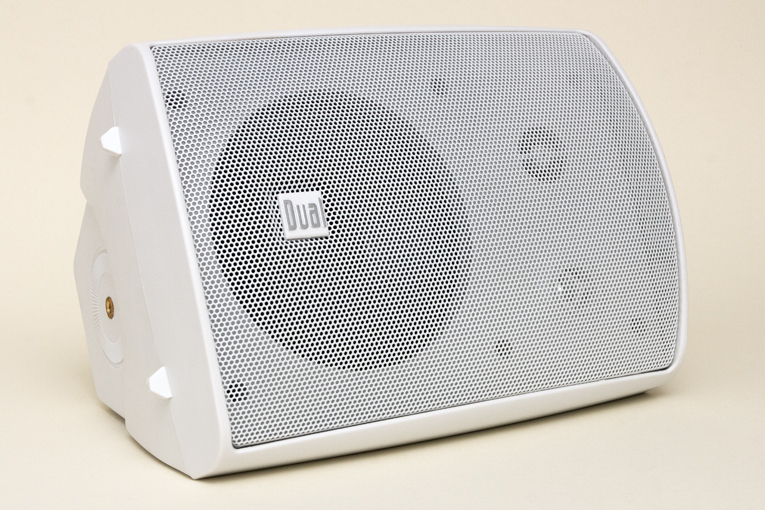 The article in question profiled inexpensive outdoor speakers, including the Dual LU53PW, which typically sells for around $70 per pair (all prices USD). I’d recommended the LU53PW as the only acceptable outdoor speaker I’d heard in the mid-two-figures price range, although I’d criticized them for sounding “blaring” and “harsh” when cranked up, and for not having much bass. The commenter (who apparently owns a pair of LU53PWs) stated, without evidence or analysis, that the harshness I and my listening panel heard was probably due more to the amp than the speaker—even though I’d tested the Dual and the other speakers featured in the article using two Outlaw Audio Model 2200 monoblock amplifiers ($798 per pair), which are far better than any amp likely to be used with the Dual, and which didn’t produce similar problems with the other speakers we tested.

I hadn’t done any technical analysis on the Dual, so to find out what was going on inside, I took it apart. I found a 5″ woofer running full range, plus two tweeters, measuring 1″ and 0.5″ in diameter. The only crossover component is a single capacitor connected in series with the larger tweeter, to filter the bass out. In the accompanying picture, it’s the tiny black cylinder barely visible on the left side of the tweeter magnet. 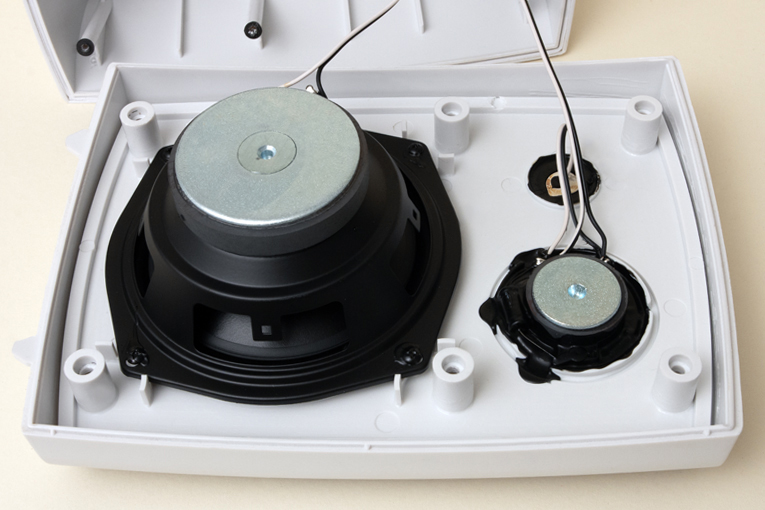 This is a good way to build a tolerable-sounding, ultra-low-budget two- or three-way speaker—combine an OK midrange/woofer with a really cheap tweeter (or tweeters), and high-pass filter the tweeter so it’s active only in the top one-and-a-half-to-two octaves of audio, where the ear is either relatively insensitive or, for many of us, partially non-functional. It’s this philosophy that made the Dayton Audio B652 the benchmark for cheap speakers.

However, this design will produce easily audible frequency-response anomalies. Meanwhile, no reasonably well-designed amp will produce audible frequency-response anomalies, at least when it’s used within its limits. And while there are numerous published blind tests in which listeners were readily and reliably able to distinguish the sounds of different headphones and speakers (even similar models from the same brand), I can’t find a single example in the Audio Engineering Society E-Library of a test that found listeners were able to distinguish between reasonably well-designed, properly functioning amplifiers in blind tests.

Any competent scientist would tell you this doesn’t mean there are no sonic differences among amplifiers—only that there are no differences that can be identified under the testing conditions. But it does show, clearly and incontestably, that speakers and headphones make a big, obvious difference in sound quality, and amplifiers don’t—again, assuming they’re functioning properly and used as designed.

Yet there are a lot of audio enthusiasts, like the commenter mentioned above, who insist that amps make a major contribution to the character of a system’s sound. Why? Because audio publications have told them that easily identifiable, musically important differences exist among practically all amplifiers, and that it’s critical to choose the right amplifier for your speakers—even though they provide no means of doing so, other than trusting their writers’ judgment or “auditioning” the amplifier at a dealer or audio show under completely casual, uncontrolled conditions, probably using speakers they’re not familiar with. These publications describe the differences among amplifiers in much the same way they describe the differences among speakers. Some amp manufacturers do the same. Neither, to my knowledge, has ever presented evidence to support their positions. Instead, they tend to deploy artsy, metaphysical verbiage as a red herring, in an attempt to draw our attention away from the facts. 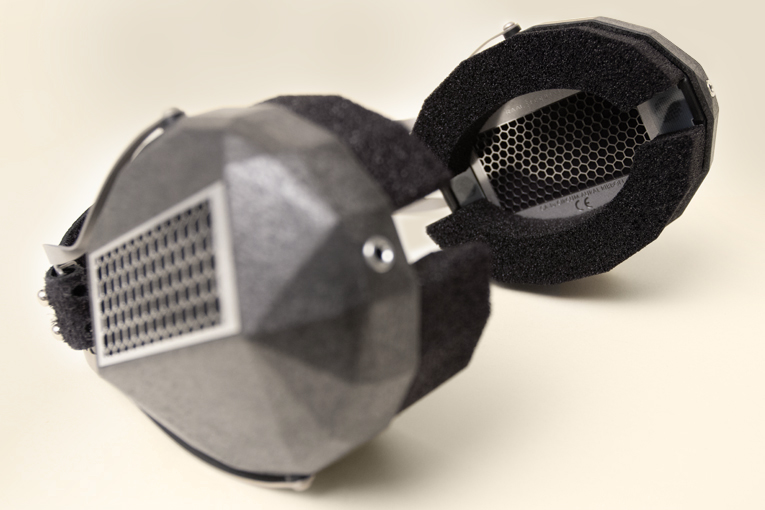 However, there are cases where the choice of headphone amplifier plays a critical role in sound quality. Take the new RAAL-requisite CA-1a headphones, which I covered in my recent report from the SoCal CanJam show on SoundStage! Global, and which I’m testing as I write this. They use ribbon drivers with a 0.2-ohm impedance, which any conventional amplifier will see as a short circuit. Unless the amp has a relatively high output impedance, which functions as short-circuit protection, a 0.2-ohm load will force it to shut itself down or suffer damage to its power supply or output devices. You either have to use a special amplifier, like RAAL-requisite’s VM-1a, or a regular headphone amp with the company’s TI-1b transformer, which presents an input impedance a standard headphone amp can handle. 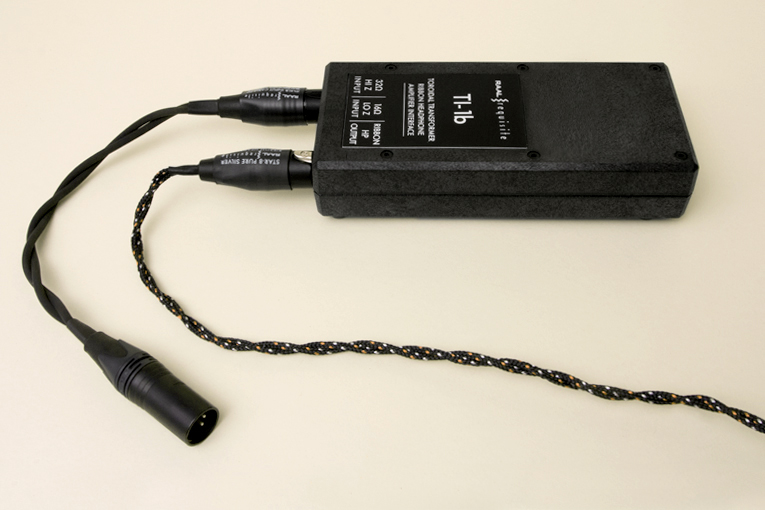 While RAAL-requisite’s original SR-1a headphones were so insensitive that they could be driven only by a speaker amplifier, company co-owner Danny McKinney told me the CA-1a headphones need only about 2W of power from the amp—a fifth of what the SR-1a headphones needed, but ten to 20 times the power that a typical headphone amp can deliver. So with these (admittedly very exotic) headphones, you have to be sure to pick a headphone amp with sufficient power—such as the Schiit Audio Magnius I use.

Even fairly insensitive headphones can usually be driven by any source device more powerful than a typical smartphone headphone jack. There are a few, though, that require serious consideration. The most notorious are probably the HiFiMan Susvara headphones, which I measured at 80.6dB sensitivity for a 1mW signal, and which, in my testing, often required an 8Wpc headphone amp (of which there aren’t many) to reach satisfying volume.

Earphones using balanced armatures usually have a big impedance rise in the treble, which means their frequency response can be significantly affected by the output impedance of the amp. Sometimes, the difference can cause a tonal balance tilt of perhaps 3dB in the bass, often with a similar but opposite tilt in the treble. You’ll easily notice this difference in sound if you use these earphones with a source that has high output impedance, such as tube amps and some cheap laptops. We can assume the earphones’ designers intended them for use with a low-impedance source device, as these are far more common. So if you use an amp with a high output impedance, you’ll probably be getting a sound different from what the earphones’ designers intended. (Although who knows—you might like it better!)

I’m not optimistic that the world of traditional, speaker-based audio will move toward a more rational understanding of how amplifiers contribute—and don’t contribute—to the sound of an audio system. But considering how eagerly headphone enthusiasts have embraced a more rational, informed approach to their hobby, I do think that we can rise above the decades of uninformed, irrational nonsense that high-end audio publications and manufacturers have thrown at their readers and customers.