As anyone who has recently visited an Apple Store can tell you, iPhone protection is big business -- a high-quality phone case can easily cost $50 to $70. Another big iPhone-related business is headphones -- something that an iPhone owner checking out the Bose, Beats, or B&W options at that same Apple store can readily confirm. The argument in favor of a good case is easy to make -- fixing a broken iPhone can be startlingly expensive (yet another iPhone-related business). But what good, ultimately, are pricey headphones if the sound delivered by your iPhone’s headphone output is, at best, mediocre?

Arcam’s MusicBoost ($189 USD) is aimed at iPhone owners seeking a solid phone case and better sound. Its sleek case of nonslip polycarbonate has a built-in, rechargeable lithium-polymer battery that provides your iPhone with up to 120% longer battery life, said charging carried out via the MusicBoost’s Micro-USB port. The case is sturdy, yet has enough elasticity to pass a drop test: when I slipped my iPhone into it and dropped it on the floor, my phone bounced -- a good thing. The MusicBoost is also soft to the touch, making cradling it in your hand during long listening sessions a not-unpleasant experience. 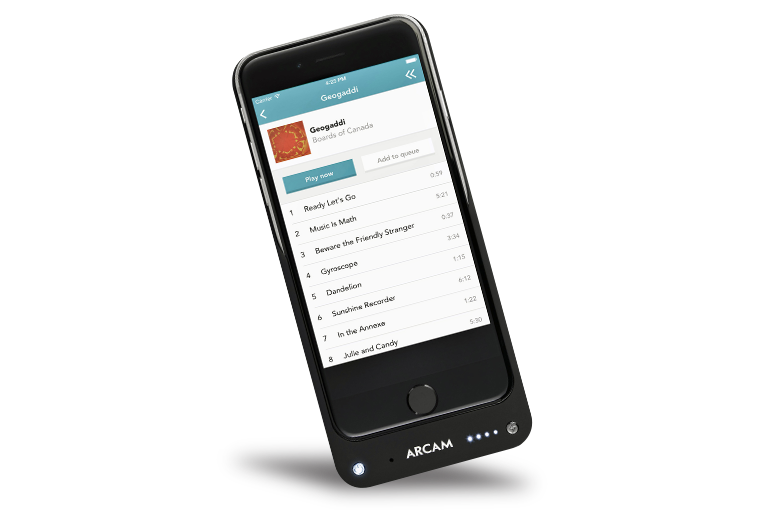 The top half of the MusicBoost tapers to provide access to the iPhone’s volume adjust, mute, and power on/off controls, and an indentation on the back is wide enough to easily accommodate the phone’s camera and flash. Apart from Micro-USB and headphone output jacks on the bottom, the only other features of the case are two buttons: one for power-on, and the other to turn on a strip of four LEDs that indicate the charge status.

Arcam’s box contains the MusicBoost plus a USB-to-Micro-USB cable. That’s it. The original MusicBoost was for only the iPhone 6; the latest model is for the iPhone 6 and 6s, the latter being very slightly (0.2mm) deeper. So make sure the correct version for your phone, 6 or 6/6s, is indicated on the box. 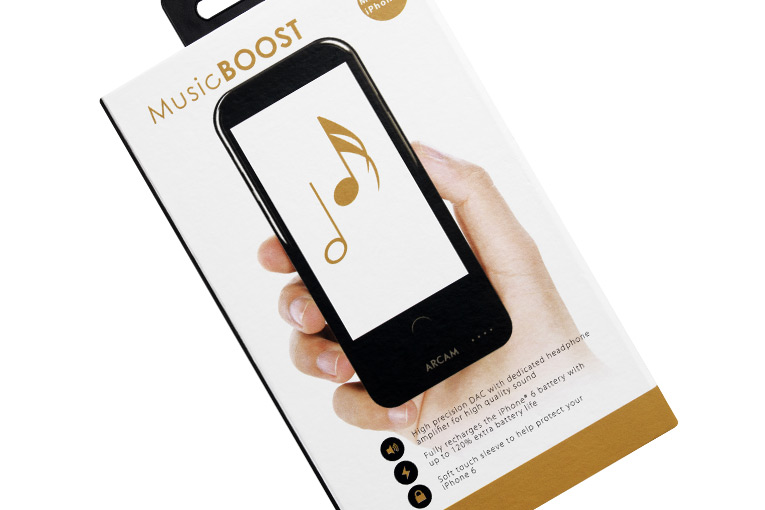 I charged the MusicBoost overnight. The next morning, with all four of its charge LEDs blazing, I was ready to slot in my iPhone 6. The fit was snug -- there was no question of the phone slipping out of the case. Adding the MusicBoost increased the phone’s size and mass: it was now 2.5 times as deep, almost an inch longer, and quite a bit heavier. Since, for me, the appeal of the iPhone 6 was its compact size relative to its screen area -- the main reason I bought the 6 instead of the larger 6 Plus -- I can’t say I was thrilled with the change. Then again, in its new case, my iPhone was less clunky than the Astell&Kern AK240 portable music player I had on hand for comparison. Considering that the AK240 only plays music and won’t let me play Pokémon Go while driving, my newly MusicBoosted iPhone offered greater functionality.

Apple is good at many things, but high-quality sound arguably isn’t one of them. Of all the streaming services I’ve recently listened to, Apple Music is the worst sounding of the lot. While many Android phones can play high-resolution FLAC files, Apple’s iTunes media-library software doesn’t support that file format, and audio output resolution from the iPhone’s headphone and Lightning connectors is limited to 16-bit/48kHz and 24-bit/48kHz, respectively.

It’s in this somewhat hostile environment that the MusicBoost must work its magic. Arcam’s case features a built-in Texas Instruments/Burr-Brown DAC that plays digital audio extracted from the iPhone’s Lightning connector. Both the circuit design and DAC are derived from Arcam’s own rPAC desktop USB DAC-headphone amp. According to Arcam, the MusicBoost’s headphone amp provides a significant increase in power output over the iPhone across a range of impedances, making it compatible with a wider array of headphones than the iPhone comfortably supports. 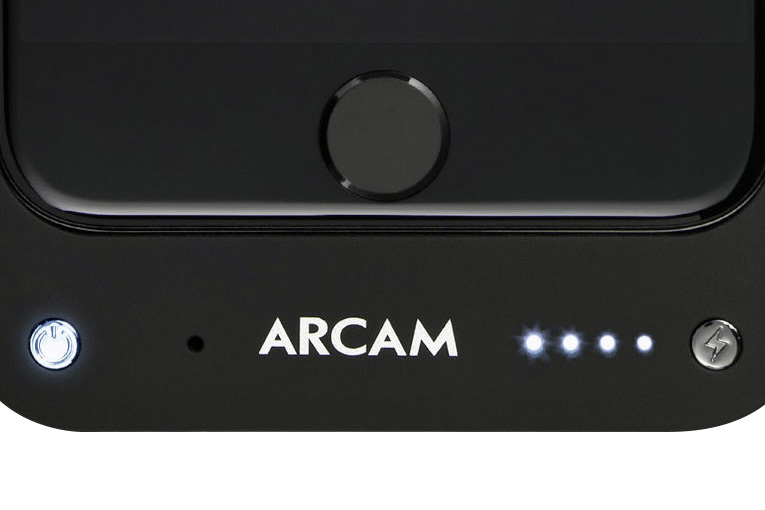 To evaluate the MusicBoost I used Sennheiser’s HD 598 headphones, a relatively affordable over-ear model that’s been my reference for the past few years. Going into the test, it occurred to me that I’d never done serious listening using my iPhone as a source. I’ve used it to control other devices, such as Wi-Fi and Bluetooth speakers, media streamers and Blu-ray players, my car audio system, etc. Otherwise, my iPhone music listening has mostly been limited to streamed playlists at the gym, heard through throwaway earbuds. Now, I tapped the FLAC Player+ app to transfer and play a selection of hi-rez FLAC files from my desktop computer’s music library, as well as streamed lossless tracks from Tidal.

How did my naked iPhone 6 sound through the good-quality Sennheiser ’phones? In a word, bad. “Aikea-Guinea,” from the Cocteau Twins’ The Pink Opaque (24-bit/96kHz FLAC, 4AD/HDtracks), was flat, papery, and constrained, with little ambience or dimensionality. But when I listened to the same track with my iPhone plugged into the MusicBoost, I could immediately hear an improvement: wimpy-sounding electronic drums took on heft, the confused-sounding vocal mix displayed separation and layering, the bass guitar deepened, and the music took on richness and warmth. It was as if I’d suddenly been transported to my college dorm room in 1985, listening to the same track on vinyl alongside my chain-smoking goth roommate.

As I compared other tracks using the iPhone and the MusicBoost’s headphone outputs, the same story kept being retold. “Every Time We Say Goodbye,” from the Jimmy Cobb Quartet’s Jazz in the Key of Blue (24/96 FLAC, Chesky/HDtracks), lacked detail and ambience through the iPhone alone. With the MusicBoost doing the heavy lifting, however, the breathy, brassy texture of Roy Hargrove’s trumpet was easy to hear, and there was a palpable sense of space between the instruments. In “Fortune Teller,” from Calexico’s Algiers (24/96 FLAC, Anti-/HDtracks), the up-front percussion -- a regular feature of this band’s recordings -- sounded crisp, dynamic, and driving with the Arcam, with good depth and roundness to the kick drum. Voices were detailed, with plenty of separation between the lead and backing voices. Through the iPhone alone, this track sounded flatter, less dynamic . . . I think you know where I’m going with this. 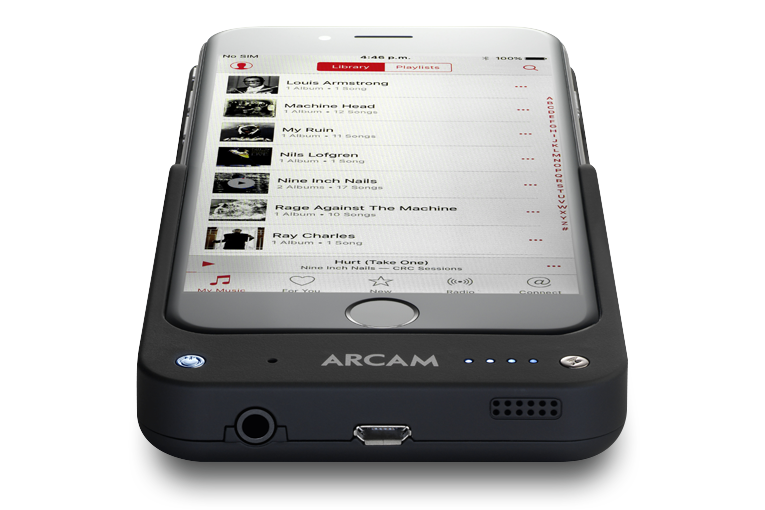 Streamed music, too, benefited from the MusicBoost. I wrapped up my listening with “Part One: Homecoming,” from Ray LaMontagne’s Ouroboros (16/44.1 FLAC, RCA/Tidal) -- my skull was immersed in vast, 360-degree sound. LaMontagne’s voice came across as larger than life, while his briskly strummed guitar emanated from a smaller, more focused zone in the mix. Through the MusicBoost, “Part One: Homecoming” was a stereo spectacular. Through the iPhone alone, not so much.

Arcam’s MusicBoost far exceeded my expectations, and forced me to confront and closely inspect the iPhone’s sonic limitations, which turn out to be fairly serious. Consider this: An iPhone case with a rechargeable battery can run you about $100. For $189, Arcam’s MusicBoost will not only protect your phone and keep its battery charged, it will make your music sound good. If you own an iPhone 6 or 6s and care about sound quality, Arcam’s MusicBoost is an essential accessory.

. . . Al Griffin
This email address is being protected from spambots. You need JavaScript enabled to view it.

E-mail: This email address is being protected from spambots. You need JavaScript enabled to view it.
Website: www.arcam.co.uk

Brian 15 days ago Eardrum Suck: The Mystery Solved!
Hi Brent, I bought the Soundcore Q20s on your recommendation in the comments below back ...