After my discovery last month of quality headphones from Koss for $49.99 USD, I decided to investigate Altec’s MZX300 Bluetooth headphones, which retail for only $39.99. 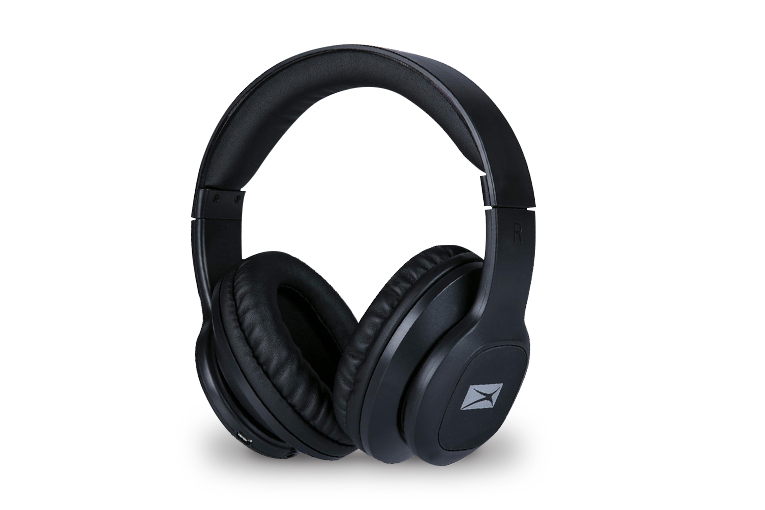 The cardboard box has black-on-white printing and an actual-size photo of the MZX300s. Inside are the headphones, a quick-start guide, a carry pouch, and two somewhat chintzy, thin-wired cables: a USB-to-USB-Micro cord for charging, and a 3.5mm cord for using the MZX300s with wired devices. Even at this low price, these headphones can be used wired or wirelessly.

The MZX300s are all plastic, in your choice of several colors, with generously padded earcups and headband. There’s a large Altec Lansing logo on the right earcup, which is linked to the headband by an arm with a smaller logo; on the top of the headband is another logo, printed facing the opposite way: when you look down at the headband before donning the ’phones, that logo will be upside down. The headband’s arms are adjustable, with detents. It’s plastic on plastic so it’s stiffer than other headbands. I found it best to find the right position for my ears, then just leave it alone.

On the left earcup are all the controls and connections. Along the earcup’s bottom edge are a charging port, and a 3.5mm jack for the audio cord. On the rear of the cup are three pushbuttons: in the middle is power on/off, flanked by + and - buttons for raising and lowering volume or going to the next or previous track, depending on whether they’re briefly pressed or held down. A small LED above these buttons lets you know what mode you’re in. A voice will also do that. I was a bit surprised that headphones so inexpensive would have this feature. 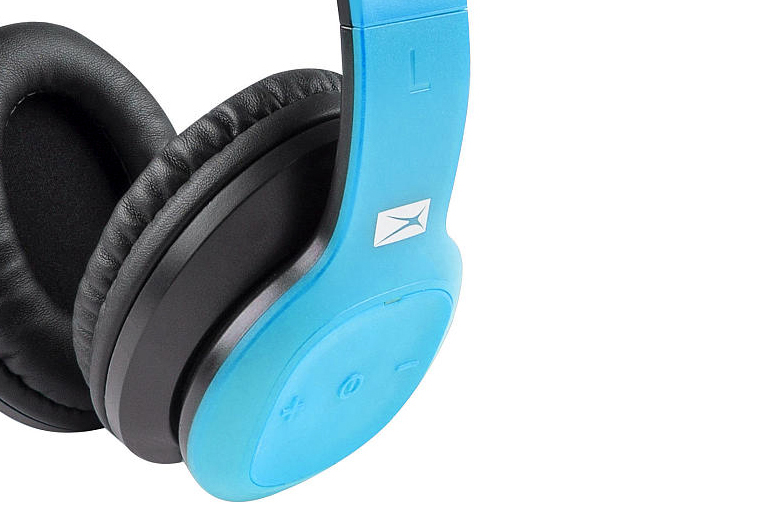 The oval earcups are roughly ear-shaped, with exterior dimensions of 3.5”H by 2.75”W and openings measuring 2.5”H x 1.5”W. Overall, the MZX300s are 7”H x 6.25”W by 3”D, and neither fold nor collapse. The build quality is a bit on the cheap side and a little creaky, and seemed to weigh even less than the specified 7 ounces. They felt as if they’d fall apart as soon as the one-year warranty period was over.

The only specs that Altec Lansing provides are: six hours of playing time from a full battery charge, the drivers measure 40mm, and the frequency range is 20Hz-20kHz.

Bluetooth pairing was a snap. When I turned on the MZX300s, their LEDs began flashing red and blue to indicate that the headphones were now in pairing mode. I selected them from my device’s Bluetooth menu and connection was almost instantaneous. 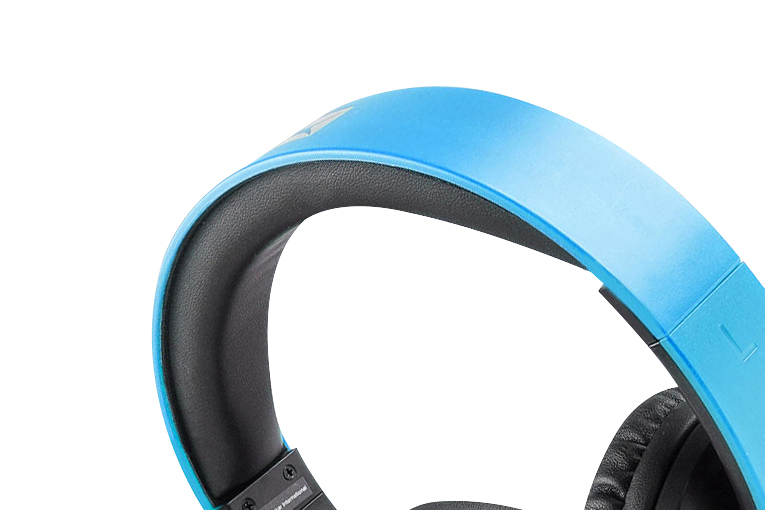 The Altec Lansings’ range of wireless operation was about average for my experience: 22’ in the house, 30’ outdoors. They fit snugly without undue pinching, and I was able to perform just about any physical activity without them falling off. My fingers had trouble learning the positions of the three buttons, but after a while, I came to admire their simplicity of design.

The MZX300s’ sound was not particularly loud. The bass and treble were ill defined, the bass downright lacking, the treble shrill and indistinct, and the middle muddled, with diminished presence. The overall effect was that pretty much everything sounded like FM radio or SiriusXM. Using the wired connection didn’t improve things much.

I played the soundtrack album of the original Star Wars film, from 1977: Episode IV: A New Hope (16-bit/44.1kHz ALAC, RCA/BMG). It was pretty much a total mess. The brass sounded OK, but the thin, tinny violins were doing . . . what? I couldn’t tell, because the sounds were so unfocused. The bass was there, but not well defined. 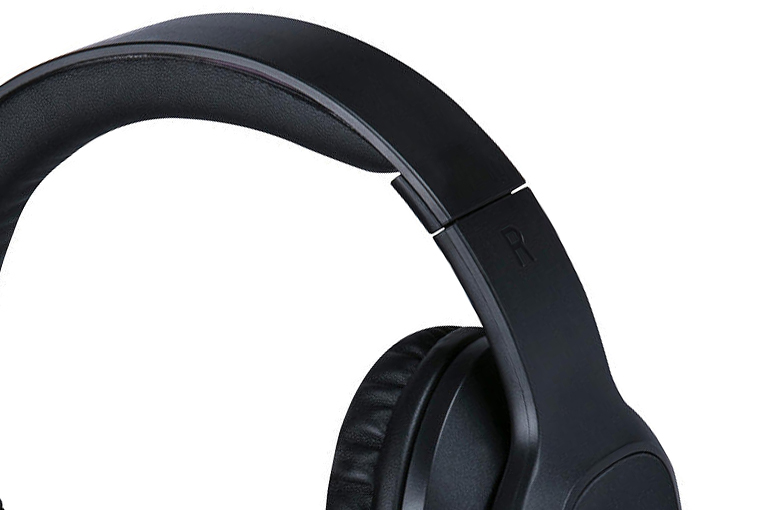 With trepidation, I played the opening of Vaughan Williams’s A Sea Symphony, with Sir Adrian Boult conducting the London Philharmonic Orchestra and Choir (16/44.1 ALAC, EMI) -- perhaps the greatest recording ever made of a composition for full chorus and orchestra, with a lot of harp detail and an awesome pipe organ. The organ came across more clearly than I expected, but the cymbal crash at the beginning was mush. I did hear a lot of this recording’s intricate detail, but only because I already knew it was there.

One of the best country-rock records you’ve never heard is the Villains’ self-titled album (16/44.1 ALAC, DCM 2395). Through good equipment, the first track, “Let’s Forget About It Tonight,” sounds rich, full, and detailed. Through the Altec Lansing MZX300s it was muddy. 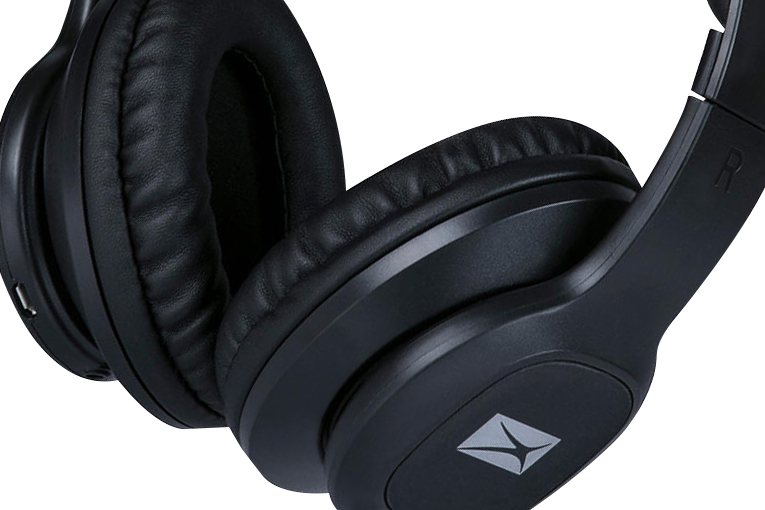 And so on. Through these headphones, I didn’t hear anything I could call high fidelity. Medium-fi was the best I could get.

Altec Lansing’s MZX300 headphones have some good design features: they can be used wired or wirelessly, their pushbuttons are simple and easy to operate, and their earcups are not round but ear-shaped -- things not usually found on inexpensive cans. But Altec apparently cut costs in the wrong places: in the electronics and drivers. If you’re going to listen only to spoken word or old-time radio, these headphones will do; but if you want even semi-serious sound quality, be willing to spend a few bucks more. There are bargains out there -- such as the Koss UR42i ($49.99) or current models from JVC and Monoprice -- that can be called “high fidelity” without qualification and won’t break the bank. Otherwise, I think I’ve discovered the threshold for bargain headphones worth considering: If they cost less than $50, best to avoid them, or at a minimum proceed with caution.