JBL E55BT Quincy Edition headphones measurements can be found by clicking this link.

The E55BT Quincy Edition headphones take me back to the early days of the headphone boom, when it seemed that the primary goal of headphone brands was to get a celebrity to endorse their products. While endorsements were once common to the point of absurdity -- Soul Electronics sold a model endorsed by Tim Tebow -- these days they’re rare. I think the E55BT Quincy Edition ($199.95 USD) is the first set of celeb-endorsed headphones I’ve reviewed in about four years.

The $50 more you pay for the Quincy Editions compared with the standard E55BT ($149.95) gets you -- well, a product endorsed by Quincy Jones, the composer/producer best known for working with artists such as Michael Jackson, Frank Sinatra, and Miles Davis. According to JBL’s website, “The legendary producer Quincy Jones has fully endorsed and added his personal touch to the renowned JBL sound. . . .” 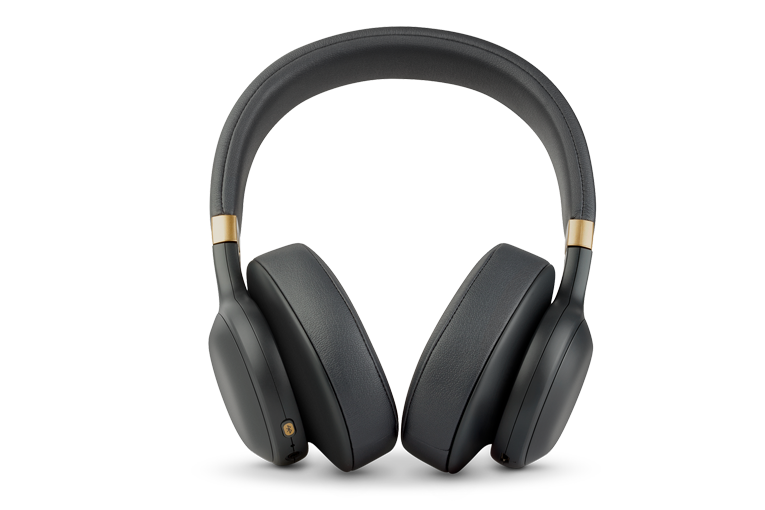 But what does that mean? In tuning the Quincy Edition, did Jones go through numerous rounds of trial and error? Or did he put them on once, listen for 20 seconds, and say, “Yeah, that sounds pretty good”? Years ago, an acquaintance who worked in the headphone biz showed me a proposed endorsement contract with a hip-hop star whose name you know -- and there was not one word about the artist approving the sound of the headphones. Ever since, I’ve been skeptical of such claims and endorsements.

Besides, what does even a professional musician know about tuning headphones? In my experience -- which includes plenty of time in the studio, as well as consulting on the design of professional monitor and PA speakers -- musicians tend to like whatever makes their music sound vivid, dynamic, and exciting. The early Beats headphones were supposedly tuned by Dr. Dre and other famous musicians, but they delivered a sound that, while exciting and dynamic, was almost universally panned by audio critics for having severe tonal colorations.

JBL’s E55BT Quincy Edition is a more mass-market product than the headphones Jones has previously endorsed for JBL’s sister company AKG, such as the open-back Q 701. The Quincys even have Bluetooth, a feature audiophiles tend to shun. The coolest touch JBL has added is that Jones himself recorded the voice prompts for “powering on,” “connected,” and “powering off.” 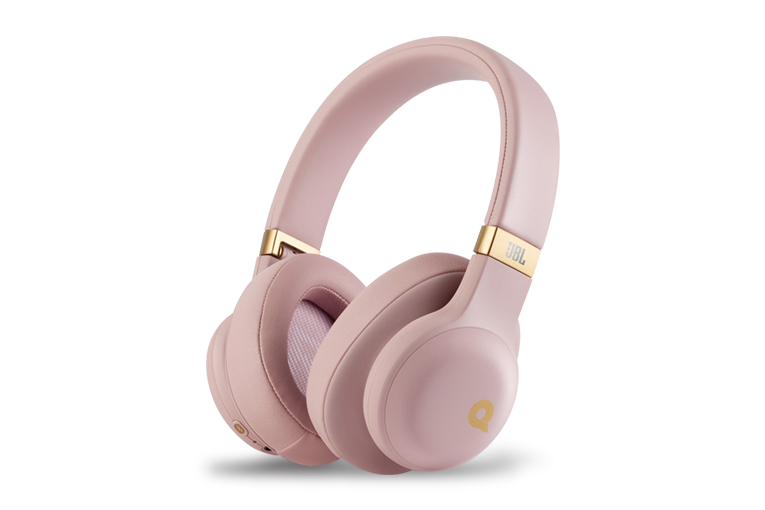 I wanted to review the E55BT Quincy Edition headphones not just to dig the Quincy Jones vibe, but because the Harman Curve -- a target response curve for headphones developed through years of research done by JBL’s parent company, Harman International -- has been finding its way into more and more JBL products, and I suspected that it might have influenced the voicing of these headphones. Harman science meets Quincy’s undeniable taste . . . how could I not want to hear them?

The E55BT Quincy Edition headphones come with a drawstring neoprene case. The drawstring has a clasp that holds it tight, similar to the ones often found on camping gear and outdoor clothing. Included is a cable 54” (1.37m) long and tipped with a 3.5mm plug on the source end and a 2.5mm plug on the headphone end, for when you want to plug the headphones in directly -- when you’re on an airplane, or when the headphones’ rechargeable battery runs down. (JBL says a full charge should last 20 hours.) A USB-to-Micro-USB charging cable is also included. 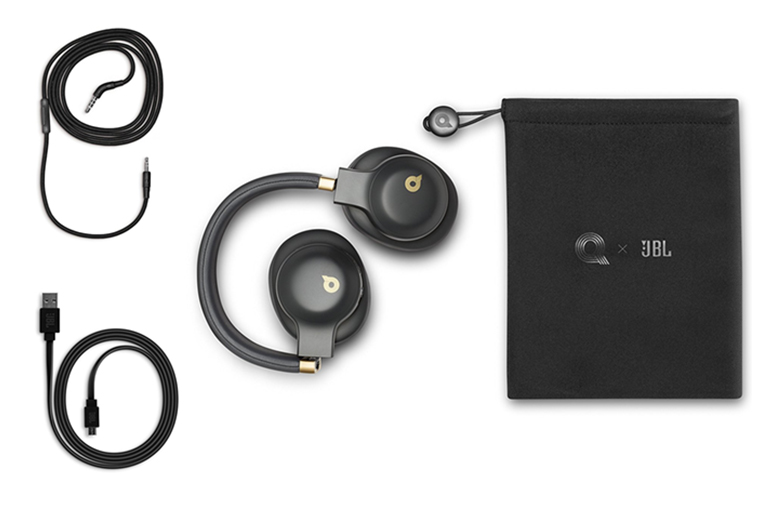 While the E55BT Quincy Edition headphones have firm earpads, their clamping force was light -- I found them fairly comfortable for long hauls. I wore them on a flight from Los Angeles to New York and ran them almost the whole time, watching a couple of movies and listening to a few albums. While I occasionally wanted to pull them off my head and give my ears a rub, they never felt really uncomfortable. At times, the earpads’ firmness made it feel as if I wasn’t getting a firm seal near the bottoms of my outer ears, but the headphones never sounded as if I wasn’t getting a good seal.

The right earpiece has an on/off button, and a play/pause button flanked by buttons that double for volume up/down and next/previous track. Once I learned what the buttons do and how they work, it was easy to operate them by feel.

On travels via Los Angeles Metro’s Orange and Red lines and my JetBlue flight to JFK, the less-than-tight seal below my ears seemed to let in a little more external sound; nonetheless, I got enough isolation that I could listen to music at not-crazy-high volumes. But I did find myself pining for active noise canceling, which lets me listen at a quieter, nonfatiguing volume.

During my travels with the E55BT Quincy Editions, I heard no such idiosyncrasies as boosted bass or harsh treble. For casual listening, the JBLs gave me satisfying, entertaining sound with all the music I played. It took comparisons with a few leading midpriced headphones for me to zero in on the Quincys’ sonic character. I did these comparisons using my Samsung Galaxy S8 Android phone and Apple iPod Touch, connected via Bluetooth to the Quincys and by cable to the other headphones. This should have put the Quincys at a disadvantage, because Bluetooth adds MP3-like data compression. (Unfortunately, I had no good Bluetooth headphones on hand for comparison.)

I wasn’t in the studio when Bruno Mars recorded his latest hit, “That’s What I Like,” from XXIVK Magic (320kbps Ogg Vorbis, Atlantic/Spotify) -- but to me, the Quincys sounded similar to what I imagine Mars heard over the studio monitors, albeit not as loud and with a little less deep bass. “Completely clean,” I wrote in my notes. Mars’s voice was clear and natural, comparable to what I’ve heard when listening to his records on my home system. The bass was powerful yet tight, without the slightest hint of boom. The electronic percussion, including what sounds like a processed cowbell sample, was spacious and lively, as if arrayed in a circle about 10’ or 15’ away from me. 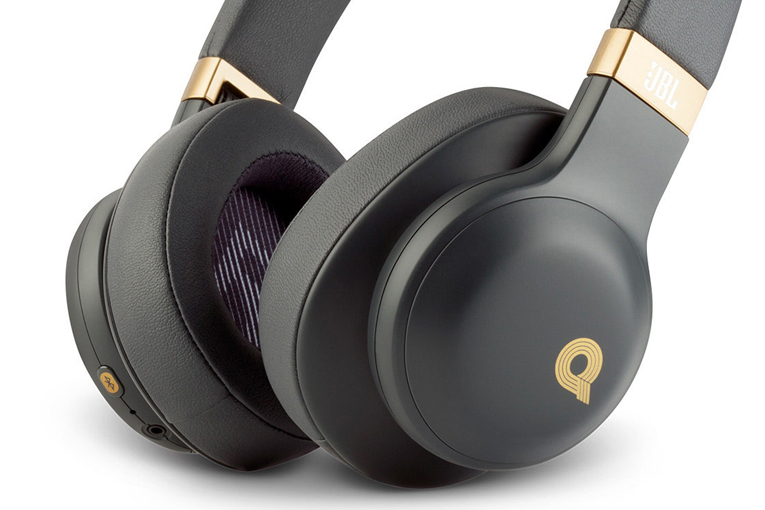 The title track of Seals & Crofts’s Diamond Girl (320kbps Ogg Vorbis, Warner/Rhino/Spotify) is as meticulously recorded and produced as “That’s What I Like,” with backing tracks from some of the best L.A. studio musicians of the 1970s. Consider it Steely Dan lite. Once again, the Quincys sounded clean and uncolored, conveying the music in a refreshingly natural way. Although the piano is panned to the left and the rhythm guitar to the right, both still had a nice sense of space -- more like real instruments in a band playing on a stage than sounds artificially positioned with a mixing board’s panning knobs.

But what doesn’t sound great with “Diamond Girl”? I needed a better perspective on the Quincys’ sound, so I pulled out two great $299 wired headphone models: NAD’s closed-back Viso HP50 and HiFiMan’s open-back, planar-magnetic HE400S. From the first piano chords, I could hear that the NADs sounded bigger, more spacious, and a little clearer. But the voices sounded buried and a little sibilant compared with the Quincys, and the HP50s’ bass was boomier and less distinct. I ended up preferring the JBLs overall with “Diamond Girl.” I got a similar result when I tried the HE400Ses, which delivered a huge, natural sense of space that blew away the two closed-back models, although their midrange was somewhat exaggerated. 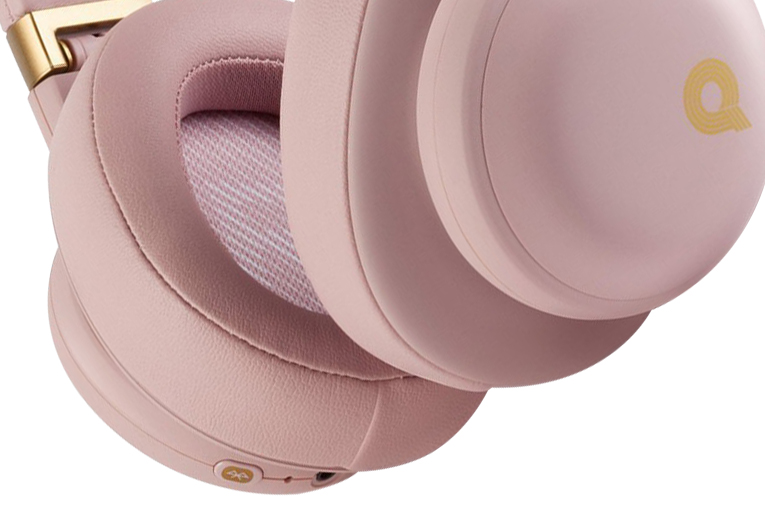 With almost all the music I played through these three sets of headphones, I came to the same conclusion: The Quincys couldn’t match the sense of space I heard from the other headphones, but they sounded flatter and more natural overall. Which model I preferred depended to some extent on what I listened to.

With the title track of saxophonist Wayne Shorter’s Speak No Evil (256kbps MP3, Blue Note), the NAD Viso HP50s had a more lively sound and a bigger soundstage, but made Elvin Jones’s cymbals sound a little steely -- i.e., more bright and ringing than a nice, sizzly brass cymbal should sound -- and made Ron Carter’s double bass sound relatively thuddy. In this case, I preferred the Quincys. Another jazz recording, “Watch What Happens,” from Diane Schuur’s I Remember You: With Love to Stan and Frank (320kbps Ogg Vorbis, Jazzheads/Spotify), sounded, as my notes put it, “kinda meh” through the Quincys; the Viso HP50s’ superior sense of space outweighed the slight sibilance they added to Schuur’s voice, as well as their softening of the bass notes. 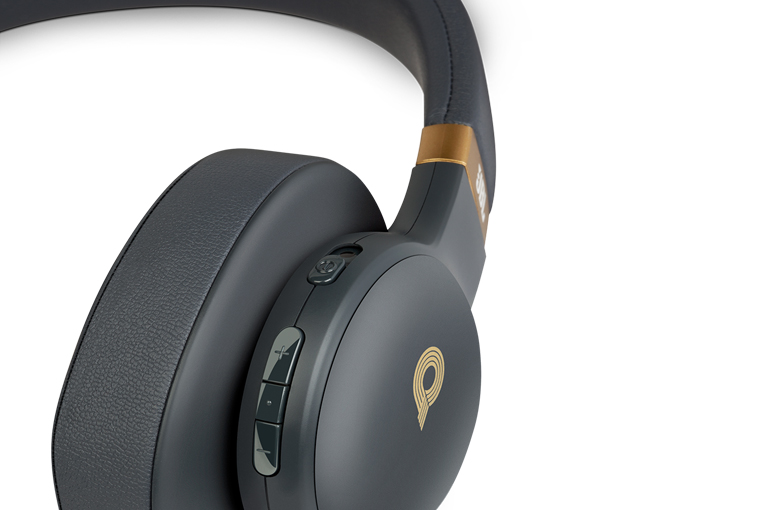 The only music I could find with which the Quincys seemed out of their element was the Jerusalem Quartet’s recording of the Allegro molto capriccioso of Bartók’s String Quartet No.2 (16-bit/44.1kHz FLAC, Harmonia Mundi). By now, you can guess that the NAD and HiFiMan models sounded more spacious, with the HE400Ses delivering the most dramatically wide and deep soundstage (helped by a slight exaggeration of noises and the players’ breathing), and the NADs producing a somewhat smaller sense of space but, to my ears, better defining the acoustic signatures of the recording venue -- I felt I could get a clearer sense of sounds reverberating off walls. The Quincys not only couldn’t match the other headphones’ spaciousness, they gave the strings something of a “cupped-hands” coloration -- as if they were being played through large cardboard tubes. I was surprised to hear this, considering how natural the Quincys had sounded with all the vocal recordings I’d played.

I got a brief chance to compare the Quincy Editions with the non-Quincy version of the E55BTs, and to measure both. Although they sounded similar, the measurements show that they’re definitely not the same headphones. To me, the original E55BTs somewhat exaggerated the bass and produced slightly brighter, more glaring highs. Are the Quincys worth the extra $50? It’s a tough question, but I’d probably go for the Quincys.

For my taste, JBL’s E55BT Quincy Editions are excellent headphones. Their flat, neutral frequency response reminds me of such great studio headphones as Sony’s MDR-7506es, and they’re competitive with, though substantially different from, the best $300 headphones I have, for $100 less. Throw in the convenience of Bluetooth and a comfortable design, and you’ve got a set of excellent headphones that should thrill any pop, R&B, rock, or jazz listener.

Brent Butterworth 4 days ago The Biggest Lie in Audio
@DustinNow that I think of it, I've heard a few well-regarded brands used as whipping ...

Kevin Voecks 5 days ago The Biggest Lie in Audio
Bravo for telling the truth Brent! I should add one observation: People who "like," or ...