I’ve heard a rumor that this year’s new iPhones won’t have 3.5mm headphone jacks. Can this be why everyone and her brother seem suddenly to be making Bluetooth headphones? Less than a year ago, an Audio-Technica rep told me that A-T would probably never release a Bluetooth model. But they have released some in Japan, and this year, five models are available in the US: three in-ear and two over-ear versions of models already popular in wired versions. And right now I’m wearing Audio-Technica’s ATH-S700BT SonicFuel over-ear Bluetooth headphones ($129.95 USD). 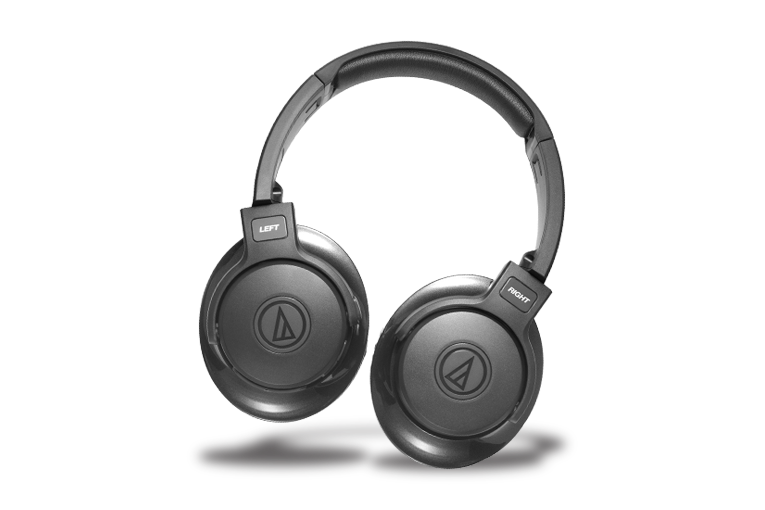 The ATH-S700BTs’ outer box has no clear plastic or clamshell packaging. Hooray -- those rough plastic edges can slice up your hands. On the front of the box is an almost full-size image of the headphones, and on the back are advertising copy and a cutaway image showing how the electrical and acoustic chambers of each earcup are separate. Oddly enough, the front and left side of the box identify the ATH-S700BTs, in large letters, as “Street Monitoring.” Perhaps they think that, in a world heavily populated by Beats headphones, this might add street cred.

Inside the outer box is an inner box of black cardboard that easily opens in halves to disclose the headphones, and a third box containing the accessories: a soft plastic carry case, a 3.3’ USB charging cable, a 3.9’ 3.5mm audio cable (the headphones can be used with Bluetooth or wired connection), and an instruction booklet in English, French, and Spanish.

I’ve been seeing less and less metal in headphone construction -- in the ATH-S700BTs all I can find are four tiny Phillips-head screws, though I suppose even they could be plastic. But the headbands, sliders, earcups, and armatures are all plastic. The benefit of this is that the ATH-S700BTs are very light -- just 7.1 ounces. They also feel pretty solid for all-plastic ’phones. The earcups rotate, so the A-Ts can be stored flat; the sliders have detents to hold various positions to fit an individual’s head.

And fit they did, firmly and without pinching. I tried to shake them loose at the gym and couldn’t. If you can’t wear or just don’t like in-ear buds and are looking for quality headphones to wear while exercising, these will be a good choice.

The overall design is black and sleek, but Audio-Technica needs to learn where to place words so their ’phones can be clearly labeled and still look classy. To their credit, the A-T logo on each earcup is molded into the plastic rather being pasted on as a decal, as with another model I reviewed last year, but at the bottom of the slider in very large letters they’ve denoted Left and Right for all to see. Why? This is personal information for the wearer, not for everyone. It’s sort of like putting a clothing size on the outside of a garment rather than inside. At the top of the slider, in very small type, is printed “wireless stereo headset” -- more unnecessary info that slightly spoils the overall stealthy black look. The only color is the red of the cloth covering the inside of the earcups. 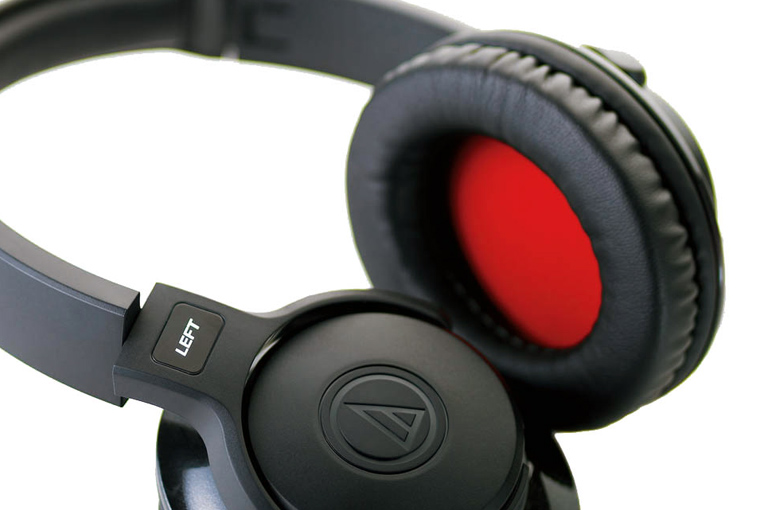 The earcups and headband are adequately, not excessively, padded, and covered in faux leather. A-T probably felt that, since the headphones were so light, they could go with a little less padding than usual.

With most Bluetooth headphones I’ve tested, the controls and connections have been on the right earcup; in the ATH-S700BTs, the action is on the left. There you’ll find a rocker switch for volume up/down, and ports for USB charging and a 3.5mm audio cable, covered with a curious rocker panel that, once opened, isn’t easily popped back in place. There’s also an LED to indicate on, off, charging, and Bluetooth pairing.

The main switch is a rounded rectangular pushbutton positioned where the left earcup fastens to the left arm. This turns the ATH-S700BTs on and off, and starts Bluetooth pairing. Then, when you’re set up to listen, you can push it once to pause, twice to skip forward a chapter, and three times to skip back. With combinations of short and long presses, you can scan forward or back at higher speed.

The 3.5mm cable that A-T supplies for wired listening has an inline control with which you can pause/play and control the volume level. It also contains a microphone, for phone calls.

I found the ATH-S700BTs’ range of wireless operation to be less than that of many Bluetooth headphones and speakers I’ve tested: about 14’ was all I could get indoors. Outdoors, the range was better: up to 26’. Audio-Technica’s estimate of three hours to fully charge the battery was right on the money. 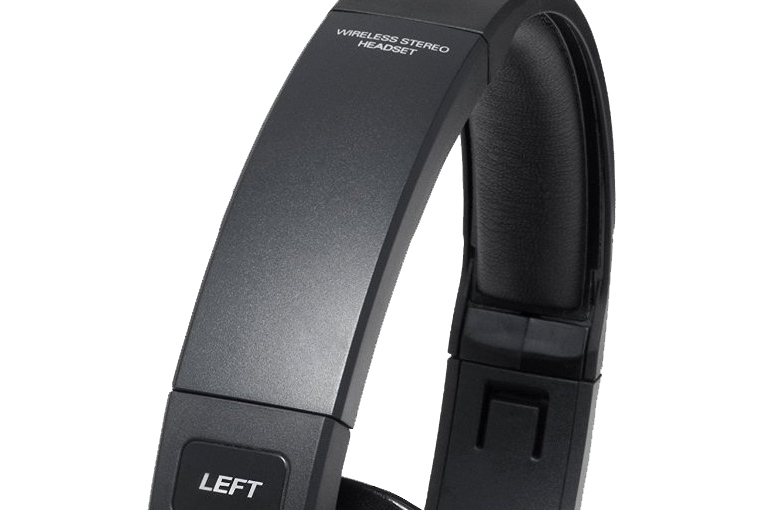 The controls were easy to use, once I’d got used to their locations. The overall control button depressed easily, but it took a while for my thumb to differentiate it from the volume-up button right next to it. After I realized that A-T had placed a tiny raised dot on the main control button, things went much better. The switch on the 3.5mm cord worked just as A-T indicated that it would.

Any idea of “plastic sound” that might have been inspired by my handling of the all-plastic ATH-S700BTs vanished on my first hearing them. They played loudly enough that I could back off one notch from the max setting on the volume control. Overall, the sound was very well balanced. The lows had good weight and heft; the mids were transparent, yet focused and natural, with very fine presence; and the highs were well balanced with the rest, neither too loud and shrill nor too reticent.

Because the sound was so well balanced, it was up to each recording to imprint its own sound quality on my ears. I began by listening to recordings that had prominent bass. Ben Sidran’s Don’t Cry for No Hipster (16-bit/44.1kHz ALAC, CD Baby), a wry collection of jazz- and bop-influenced tracks, has a version of Merle Travis’s “Sixteen Tons” with a solid bass line, in addition to piano, drums, finger snaps, and Sidran’s voice. With the ATH-S700BTs, the plucked bass was rock-solid, every attack discernible, as well as a few slaps of strings on the instrument’s neck. 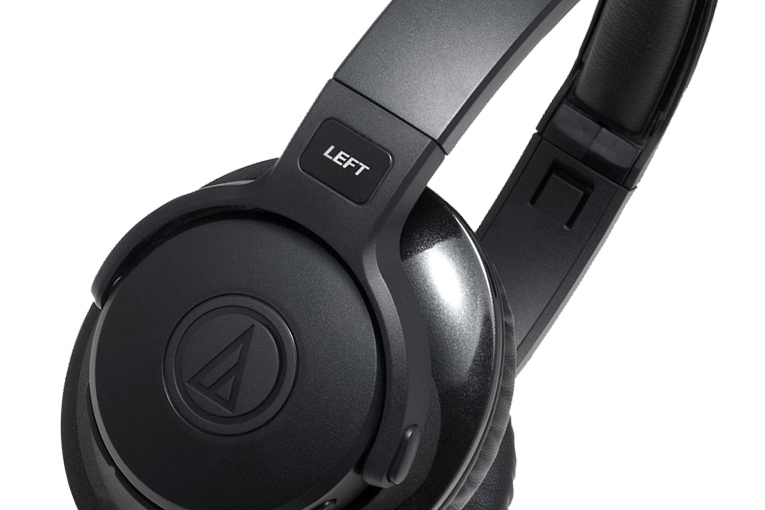 This is a Shakedown!’s Love Kills (16/44.1 ALAC, Reversed Image Unlimited) features heavy, hard-driving originals, and the ATH-S700BTs proved they could really rock out. “Radio,” in particular, begins with pounding electric bass and drums, and the sound was quite tangible, with acres of presence and sharp focus. Organist Michael Murray’s Encores à la française (16/44.1 ALAC, Telarc) has some thunderous bass passages but demonstrates the pipe organ’s entire range, from bottom to top. The bass depth here, I felt, was about at the A-Ts’ limits -- very resonant, strong, and focused, but not quite as deep as at least one other model of Bluetooth headphones I’ve auditioned.

The ATH-S700BTs’ soundstaging was wider and deeper than most. I could easily hear this in Jonathan Darlington and the Duisburg Philharmonic’s recording of Mahler’s Symphony No.5 (24/96 FLAC, Acousence), in which the woodwinds have great presence but sound behind the strings, with the brass and percussion even farther back -- all without losing any presence. The early (1958) stereo recording of Tullio Serafin conducting the Santa Cecilia Academy Rome in Boito’s Mefistofele (24/48 FLAC, Decca) still stands as one of that opera’s best recordings. At the end, as Mefistofele is dragged whistling to hell and Faust is saved, the soloists sounded very upfront, and the enormous chorus reproduced clearly behind them.

Due to their light weight and good fit, the Audio-Technica ATH-S700BT SonicFuels will be ideal for those who are looking for quality sound to accompany their physical activities, don’t want any wires in the way, and can’t wear in-ear ’phones. In sound quality, I found them second only to the Koss BT540i Bluetooth wireless over-ear ’phones. The Kosses cost $70 more but have slightly better bass, are more transparent and thus reveal a bit more detail, and are a bit more serviceable as wired headphones. If you’re looking for low cost and light weight, the ATH-S700BTs are an excellent choice. But either of these would beat the Beats models I’ve heard by a country mile.

Brent Butterworth 5 days ago Edifier Stax Spirit S3 Bluetooth Headphones
@AmyDazzHow do you predict my results might have changed?