When I reviewed the Bowers & Wilkins P9 Signature headphones, I found much to praise in their looks, materials, and build quality. While industrial design at Bowers & Wilkins is always top-flight, it was obvious that the company’s engineers had also put a lot of work into the acoustic design -- evidenced by the earcup suspension, attention to resonance reduction, and angled drivers with proper surrounds. Sonically, the P9 Signatures did an exceptional job delivering soundstage cues, a real sense of space, and explosive dynamics. What was more problematic from an audiophile perspective was their frequency balance. 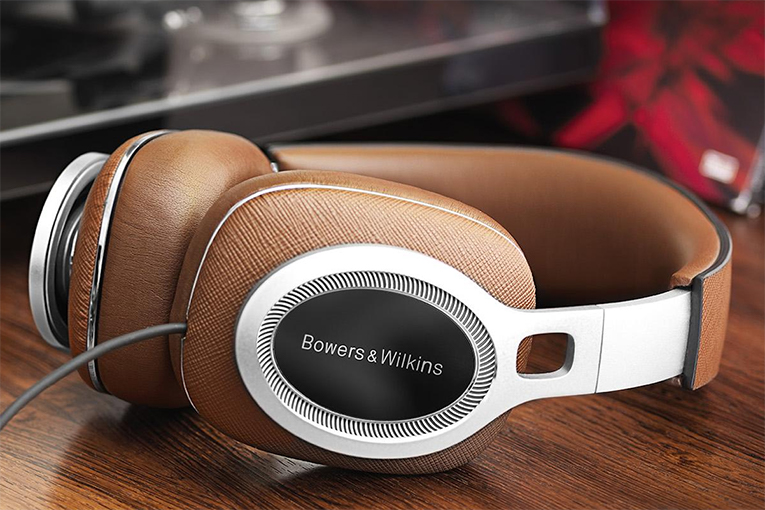 In my review, I noted the pumped-up bass and upper-midrange emphasis. When my colleague, Brent Butterworth, heard them while performing their measurements, he also noted the overabundance of bass. After looking at the measurements, Brent identified the clear cause of what we were both hearing -- a valley in the frequency response centered at about 550Hz. In his measurement comments, he wrote, “If that dip were about 6dB less deep, it would be pretty close to what I’d call a textbook headphone frequency response.” 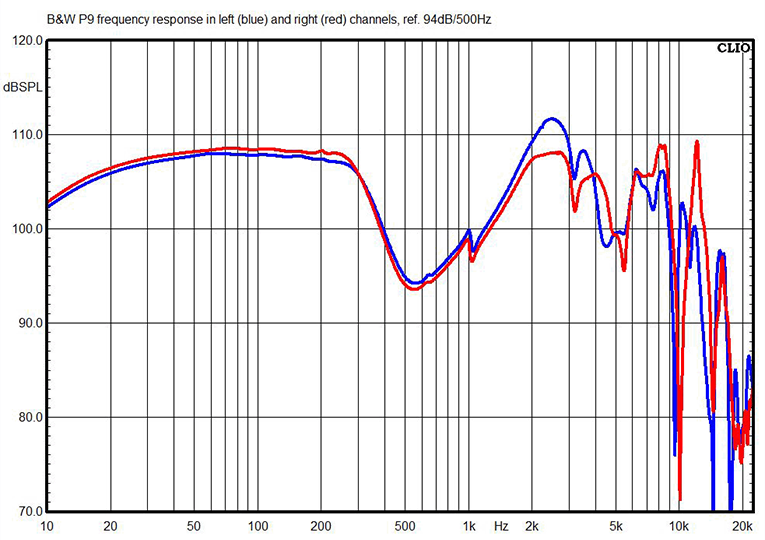 Here at SoundStage! Solo, we acknowledge that not every consumer is looking for neutral frequency response in a pair of headphones. Headphones with a V-shaped response tend to do very well in the marketplace -- as I’m sure Bowers & Wilkins is well aware. On the other hand, I, personally, do prefer a more neutral tonal balance, with perhaps just a touch of low-end augmentation. Given the many things I liked about the P9 Signatures, I wondered whether equalization would be a way to have my cake and eat it too.

Audiophiles have historically been against using equalizers in the playback chain, believing they would muck up the sound of pristine recordings. There are two reasons for this position. First, we usually insist that we want to hear exactly what is on the recording. That fails as an argument against equalization, because there are essentially no loudspeakers with ruler-flat frequency response -- especially once placed in the listening room. With regard to headphones, there isn’t even any agreement on what flat would be, although there are researchers working on that problem. Second, even the best analog equalizers do degrade the sound somewhat by introducing many more electronic components into the signal path. In the modern world, however, when most of our playback originates in the digital domain, a digital equalizer avoids many of the problems of analog equalization. Furthermore, if you are playing back that digital music from your computer or smartphone, as more and more audiophiles are doing these days, you already have a basic equalizer at your fingertips.

It’s important to realize that not all headphones are equally suited to correction through equalization. The designs that will work best have smooth FR curves -- not a lot of abrupt ups and downs -- have low levels of distortion, and are largely free of resonances that could easily be excited by altering the frequency response. (For example, a designer might intentionally put a notch at a particular frequency in order not to induce a resonance in some part of the structure that he wasn’t able to eliminate in any other way.) The Bowers & Wilkins P9 Signatures tick all of these boxes.

I do most of my headphone listening on my computer, and for file playback, I typically use foobar2000. There are a plethora of equalizers available for download and integration into foobar. Some of them are very sophisticated, with dozens of bands, 0.1dB adjustments, and the ability to change filter slopes. But, to keep things simple for anyone who wants to try a similar approach, I decided to just stick with the 1/2-octave equalizer that comes bundled with the foobar2000 DSP plug-ins, and allows adjustments in 1dB steps. Other playback software comes similarly equipped.

While I don’t know the precise workings behind the particular equalizer that comes with foobar, the general approach to working with graphic equalizers like this is to make the layout of the sliders look like the frequency corrections you are trying to create. Changing the slider can affect frequencies far outside that band, but for our purposes it is sufficient to think of a linear interpolation between the various frequency bands -- i.e., if you have a 2dB difference between the sliders and adjacent bands, a frequency half the distance in octaves between the two will be adjusted by 1dB. In the case of using the equalizer to correct for deviations from neutral in the headphone’s frequency response, we want what we see on the graphic equalizer to be the inverse of the problems we observe, when looking at the headphone’s measurements. With the Bowers & Wilkins P9 Signatures, that means we want to bring the valley centered at 550Hz up by about 6dB, while leaving the rest of the frequency response largely untouched. 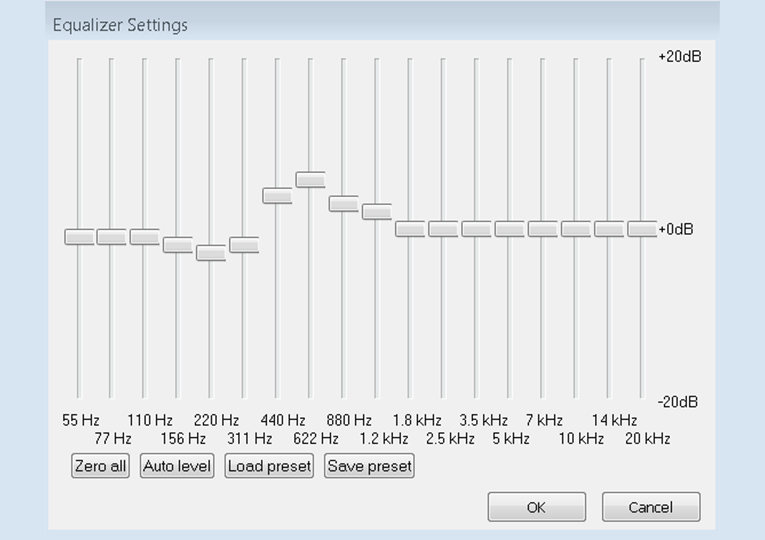 The above figure shows the corrections I made to compensate for the 6dB dip at 550Hz. I also reduced the energy in the bass, as I still felt it was a bit too much of an otherwise good thing.

I applied the equalization to Brent’s measurements with a simple linear interpolation between the center frequencies of the sliders. You can clearly see how the valley at 550Hz was filled in. For reference, I also graphed the frequency response Brent measured for NAD’s Viso HP50 closed-back headphones -- widely regarded as having a fairly neutral balance.

At this point, I was nearly done, but when I started listening to a few recordings, I heard occasional distortion. That distortion was not due to the headphones -- the P9 Signatures can play shockingly loud. Instead, boosting the middle frequencies as much as I did caused the waveform to go into digital clipping, when there was a lot of midrange energy in the music. The solution was simply to drop all of the sliders by the same amount, so that the highest was at 0dB. 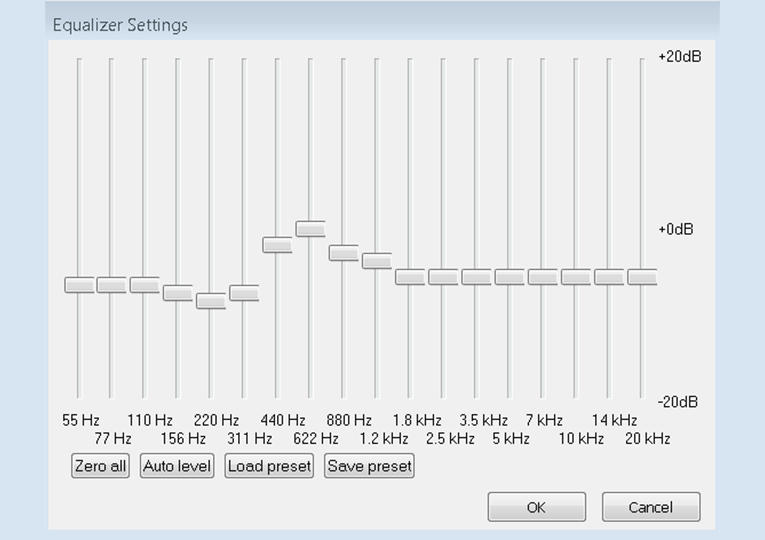 Before I had seen Brent’s measurements, I had tried equalizing the P9 Signatures by ear -- mostly focusing on the bass. While that approach did yield some improvement, using the measurements made the P9s one of the best closed-back headphones I’ve heard. Those wishing to try equalization for themselves can look through our ever-expanding headphone database. It’s just one more way in which measurements are not only interesting, but truly useful.