The Biggest Lie in Audio

You can’t get far into an audio forum or the comments sections of audio websites without encountering the statement “Some products that measure well sound bad, and some products that measure poorly sound good.” Depending on who said it, it’s at best uninformed and at worst a lie. And it’s a lie that sometimes sticks listeners with underperforming audio gear.

The inaccuracy of the first half of that sentence can be shown in scientific papers and in the absence of documented examples. The second half could be true if the words “. . . to me” were added, but to the best of my recollection, I’ve always seen it presented as a universal statement, in which case it’s false. This platitude reflects not wisdom, but a rejection of science by people who, as far as I can tell, haven’t bothered to look into the science and have no measurement experience. 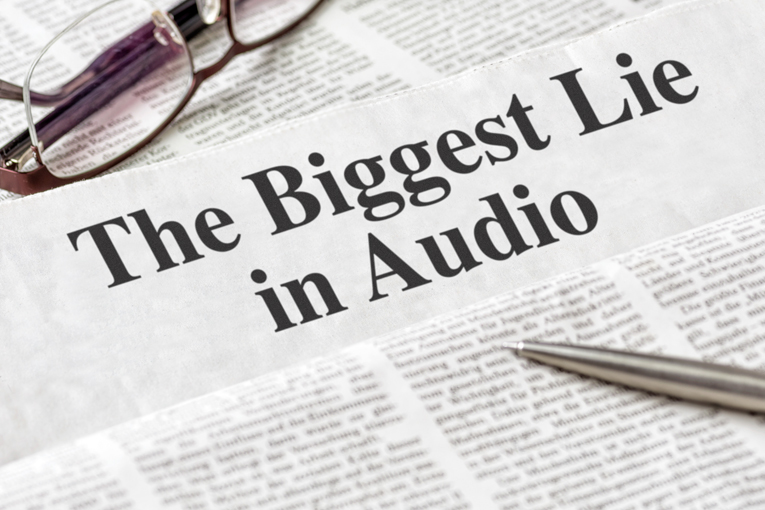 One of the most glaring examples of this sentiment appeared just this month, in a review of the Tannoy Revolution XT 6 speaker by Herb Reichert in the July 2020 issue of Stereophile. The first sentence of the review reads, “I’ve been wrestling with my elders about new ways to measure loudspeakers, lobbying for methods that might collaborate [sic] more directly with a listener’s experience.” In another article, the same writer states his opinion more directly: “As a tool for evaluation, or as a predictor of user satisfaction, today’s measuring procedures are almost useless.” As we’ll see, this review clearly shows why measurements are so essential in the evaluation of audio products.

Both of the author’s statements reflect ignorance of the subject. In the case of speakers, measurement methods that have been shown to predict user satisfaction with 86% correlation were established more than 30 years ago. They were developed largely through extensive research led by Dr. Floyd Toole, conducted at Canada’s National Research Council (NRC) in Ottawa, and continued at Harman International. Countless speaker companies now use these methods as a design guideline. That’s because they know that speakers that measure well according to these principles will sound good to most listeners.

Some might point out that the model fails 14% of the time, but it’s unlikely that the 14% of speakers that measure well but didn’t win universal love from the listening panel sound “bad,” unless they have, say, high distortion -- which a different set of measurements could easily detect. Regardless, it’s absurd to proclaim an 86% success rate “almost useless.”

More recently, scientific research has produced headphone and earphone measurements that predict user satisfaction about as accurately. For example, in AES paper 9878, “A Statistical Model that Predicts Listeners’ Preference Ratings of In-Ear Headphones: Part 2 -- Development and Validation of the Model,” a Harman International research team of Dr. Sean Olive, Todd Welti, and Omid Khonsaripour report a 91% correlation between measurements and listener preferences in an evaluation of 30 earphones using 71 listeners.

I’ll agree that measurements don’t predict which amps, DACs, and other electronics people will like. But that’s not because of flaws in the measurements -- it’s because listeners rarely agree about which audio electronics they like. Blind tests seldom show clear differences between, or preferences for, certain models, brands, or types of amplifiers, for instance. Reviews of these products do not indicate preference trends among reviewers; they tend to rave about all sorts of amps and DACs. If a statistically significant number of participants in controlled listening tests don’t express affection for some audio electronics and disdain for others, there’s no way measurements or subjective reviews can predict listener preference.

What about the idea that “some products that measure poorly sound good”? A solid argument against this notion came from Stereophile technical editor (and former editor-in-chief) John Atkinson, who, in a summary of his 1997 AES presentation, stated, “. . . once the response flatness deviates above a certain level -- a frequency-weighted standard deviation between 170Hz and 17kHz of approximately 3.5dB, for example -- it’s unlikely the speaker will either sound good or be recommended.” And he’s talking here about the speakers recommended by Stereophile writers. Research shows that a panel of multiple listeners in blind tests would likely be even less forgiving of speakers that measure poorly. 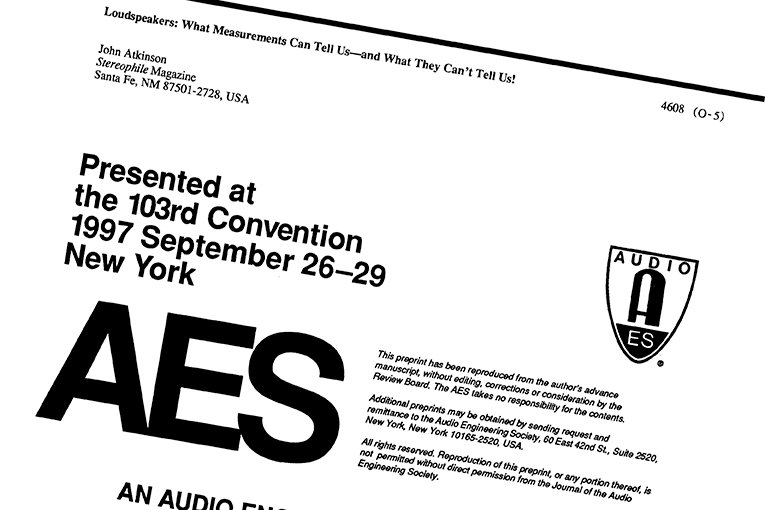 Of course, even a clearly flawed audio product might sound good to somebody. To find an example, look no further than the very same Tannoy review. Atkinson’s measurements show that, as he puts it, “. . . the tweeter appears to be balanced between 3dB and 5dB too high in level,” which creates an “excess of energy in the presence region, which I could hear with the MLSSA pseudorandom noise signal when I was performing the measurements.”

To get a rough idea of what this sounds like, turn the treble knob on an audio system up by 4dB. It’s far from subtle, and it’s not pleasant. I can’t look at that measurement without thinking the factory used the wrong tweeter resistor. In a blind test with multiple listeners, such as the evaluations conducted by the NRC or Harman, this speaker would almost certainly score poorly.

Yet I find no mention of this flaw in the subjective review. In fact, the reviewer describes the speaker’s sound as “slightly soft,” and concludes with the words “Highly recommended.” Based on this review, at least, it seems likely that if a measurement technique could be found that reliably predicts which speakers this reviewer likes, most listeners won’t like those same speakers.

Fortunately, those who read the measurements got the real story. Those who ignored the measurements because they’ve been told they’re “almost useless” may end up buying a speaker with an obvious tonal-balance error.

Don’t get me wrong -- I don’t mind if someone raves about an audio product with a huge, demonstrable flaw, just as I’d hope no one minds if I occasionally enjoy listening to Kiss’s Alive! album. I’ve read many such reviews, and rarely felt inspired to comment on them. But dismissing decades of work by some of the world’s most talented audio scientists just because it doesn’t fit your narrative is as frivolous as claiming that Gene Simmons is the greatest bass player of all time.

I would hope that audio writers would be curious about their avocation and want to learn everything they can about it, but a huge percentage of them have shut themselves off from any new information that might cast some of their beliefs in doubt. In their rejection of science, they’ve mired their readers and their industry in nonsense -- and in many cases, they’ve stuck their readers in the infinite loop of buying underperforming products and then selling those to buy other flawed products, instead of simply learning key facts about audio so they can buy good gear the first time. 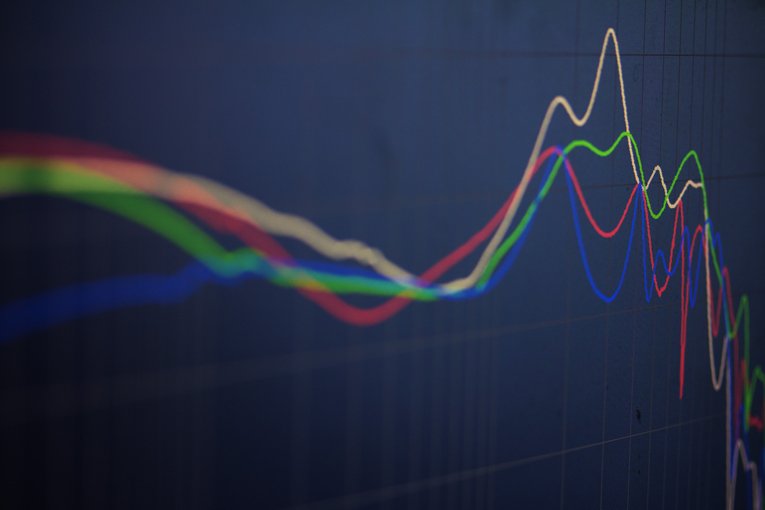 I’m encouraged, though, because the headphone community isn’t burdened with an anti-science attitude. On the contrary, headphone enthusiasts are putting together measurement rigs, reading the research, and working to understand how their headphones and amps work and interact. Yet they understand that science provides only guidelines, and that they ultimately have to listen for themselves and trust their ears to make the final judgment. Most important, they are getting better reproduction of, and more enjoyment from, their music. I think and hope that this is the future of audio.

Gundam 19 hours ago Eardrum Suck: The Mystery Solved!
Hi,
I recently got the QC35 II as a replacement for the QC25 and easily noticed ...

Sam 2 days ago Eardrum Suck: The Mystery Solved!
The QC35ii has a low ANC mode too(not sure they add this recently or it ...

nat w 3 days ago Does It Make Sense to Demo Audio Over the Internet?
@nat wThis is the paper from the research team associated with Genelec:
"Virtualized Listening Tests for Loudspeakers" ...

nat w 3 days ago Does It Make Sense to Demo Audio Over the Internet?
I found the Crutchfield system pretty compelling when I first tried it about six months ...

Mauro 3 days ago Does It Make Sense to Demo Audio Over the Internet?
@Brent ButterworthThat would be great: videos of Brent à la Davie504!
That would be the definitive headphone ...

Brent Butterworth 4 days ago Eardrum Suck: The Mystery Solved!
@SK WilsonWhich Bose model do you have? I see Costco sells the QC35II (which is among ...

SK Wilson 4 days ago Eardrum Suck: The Mystery Solved!
This comment may be a little late for the conversation, but do you have a ...

Brent Butterworth 4 days ago Does It Make Sense to Demo Audio Over the Internet?
@MauroAgreed. Too many of them lack basic knowledge of the sort you can get by ...

Brent Butterworth 4 days ago Does It Make Sense to Demo Audio Over the Internet?
@oluvI've made my case, and you've responded by saying I'm "talking BS." Oluv, you can ...