Alex Cavalli is to headphone amps what John Curl is to phono stages: not only the best-known designer of that type of product, but also the only one most audiophiles can readily name. Monoprice is to electronics companies what Amazon is to retailers: an often-resented competitor that consistently undercuts their price margins. When you combine the two, you get the Monoprice Monolith Liquid Platinum headphone amp by Alex Cavalli ($769.99 USD).

Cavalli got his start as a DIYer, then formed Cavalli Audio to produce his designs. I first encountered one of his designs at the Los Angeles CanJam show several years ago, where MrSpeakers founder Dan Clark was using Cavalli’s Liquid Glass amp ($3500) to demonstrate his headphones. Although you can’t legitimately judge an amplifier without making direct comparisons with other amps, I loved what I heard and I loved the design of the Liquid Glass, which included controls and tube sockets that made it possible to substitute a huge variety of different tubes in the pursuit of the most appealing sound. 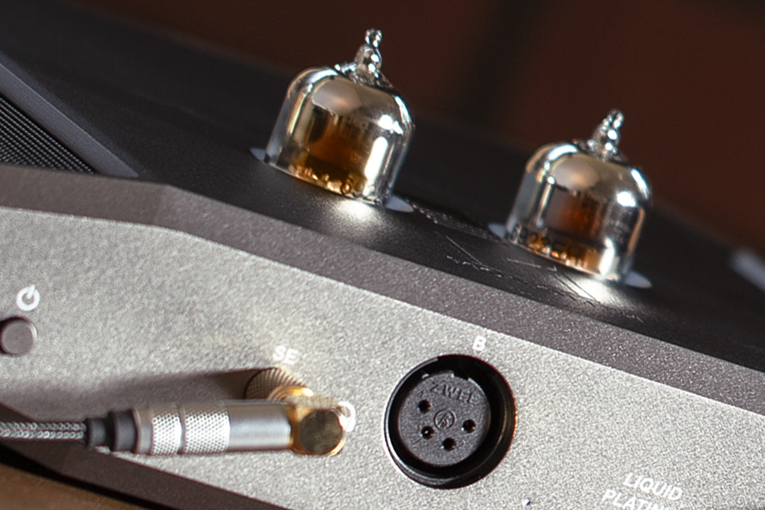 In October 2017, Cavalli closed his company; he now licenses his designs and name to Monoprice and Massdrop. The Liquid Platinum is to the Liquid Glass what Elvis was to Arthur “Big Boy” Crudup: a more accessible version that appeals to a larger market. The Liquid Platinum is a hybrid amp with a tube input stage and a transistor output stage. The 6922 tubes fit into top-mounted, nine-pin sockets, a design that makes it easy to swap them for any other 6922 or equivalent, such as 6DJ8 and ECC88 tubes.

The amp design is said to be fully balanced, with separate circuits for the positive- and negative-going halves of each amp channel. All other things being equal, a fully balanced design delivers lower noise, a faster slew rate, and twice the bandwidth of a conventional unbalanced design. Appropriately, the Liquid Platinum has balanced stereo XLR inputs in addition to the unbalanced RCA inputs, and a balanced four-pin XLR headphone output in addition to an unbalanced 1/4" output. The Liquid Platinum is just an amp, with no internal DAC or any other fancy features.

The Liquid Platinum comes with a lump-in-the-line power supply. That’s it.

There’s nothing unusual about the way the Liquid Platinum works. The front panel has a volume knob, a power button, and a button that switches between the XLR and RCA inputs. There’s also a stereo RCA output that serves as a loop-through, so you can connect a source to the Liquid Platinum and daisy-chain it to your main system. I gave the amp about 100 hours of break-in, letting it play for four days straight with Fourth World’s tune “Africa” on repeat.

For what it’s worth, the Liquid Platinum produces more heat than a typical headphone amp. You feel the heat rising from the vents along the top. So it’s not appropriate for use in an unventilated space.

Ever since I reviewed the HiFiMan HE6se headphones, I’ve been starting my headphone amp reviews by seeing if the amp had the power to drive the HE6ses to high volumes. Sensitivity of these headphones is 83.5dB at 1 milliwatt according to HiFiMan’s ratings and 79.3dB according to my measurements, which means they need about 100 times as much power as a typical set of headphones. 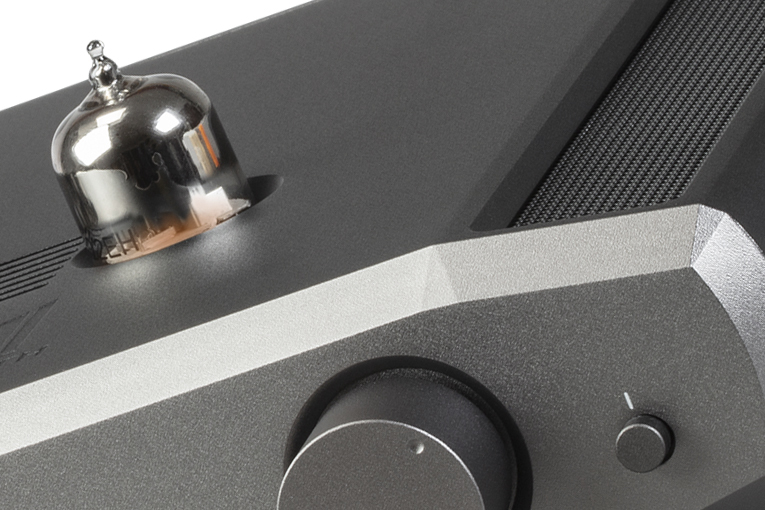 “Atlantic Black,” from drummer Makaya McCraven’s breakout album Universal Beings (320kbps Ogg Vorbis, International Anthem / Spotify), is a great test for a headphone amp’s maximum output, as it’s mostly highly dynamic percussion. The Liquid Platinum had no problem bringing the HE6se headphones to full blast and then some -- it was plenty loud enough for me with the knob at the 2 o’clock setting. Even with the volume maxed, the sound wasn’t in any way edgy or bright or distorted. Part of the percussion sound on this recording is a lot of sticks hitting the rims or sides of drums, a technique that produces an extremely loud and abrupt transient, and the Liquid Platinum delivered all those hits with seeming effortlessness.

Wanting to get an idea of how the Liquid Platinum could handle deep bass -- typically a weak spot for designs with tubes in the signal chain -- I put on “Good Time Charlie’s Got the Blues,” from Holly Cole’s album Night (16-bit/44.1kHz WAV, Universal Music Canada). I worried that the amp’s tubes might soften the deep double-bass tones in the intro, but the Liquid Platinum kept them nice and tight, and sounded good through the rest of the tune, too. Tubes also have a tendency to produce softer treble, and I thought that the amp might smooth over the HE6ses’ tendency toward brightness, but it didn’t, and I consider that a good thing. Despite the tubes, the amp’s treble is extended and clear. 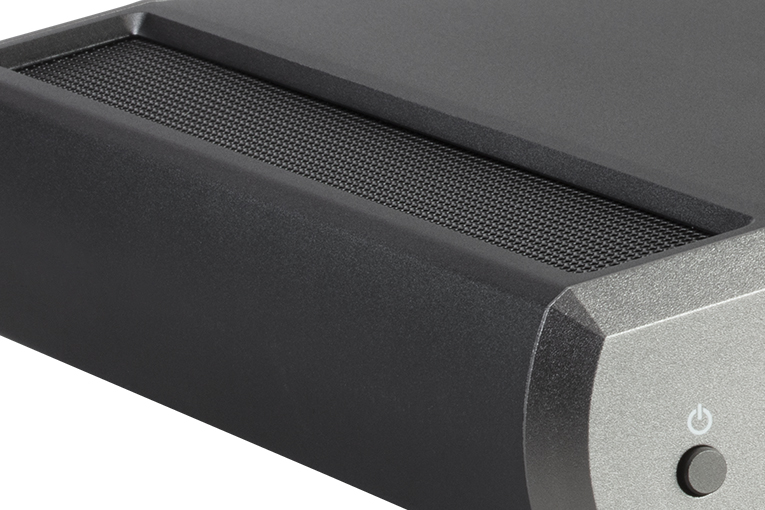 Bassist Larry Grenadier’s extraordinary new album, The Gleaners (16/44.1 WAV, ECM), revealed a subtle character of the Liquid Platinum that showed up throughout my comparisons with other amps -- and it’s not a characteristic that has anything to do with the bass, surprisingly. On The Gleaners, Grenadier lays down multiple bass tracks, often employing the bow, which adds harmonics that shift the spectrum much more up into the midrange and even into the treble. Driving the HE6es, the Liquid Platinum delivered a satisfying and sort-of-realistic sense of space (I say “sort of realistic” because I’m sure it’s reverb added in the mix). The reproduction of the bowed sound was also lifelike, capturing the resonant deeper tones of the instrument as well as the high-frequency sound of the bow scraping across the strings, and presenting both parts of the spectrum with equal weight.

There are lots of headphone amps and DAC-amps in the Liquid Platinum’s price range, in a wide variety of types and styles. I had two amps in the mid-three-figures range that I could compare it with: the Monoprice Monolith Desktop headphone amplifier and DAC with THX AAA technology ($449.99), and my usual reference amp, the Audio-gd NFB1-AMP ($485). I connected the Monoprice Desktop headphone amplifier and DAC using its analog inputs (which still run the signal through A/D and D/A conversion), and did not use its built-in EQ and Dirac Sensaround II features. I fed all three concurrently with analog audio from a Musical Fidelity V90-DAC, and matched their output levels within ±0.05dB. 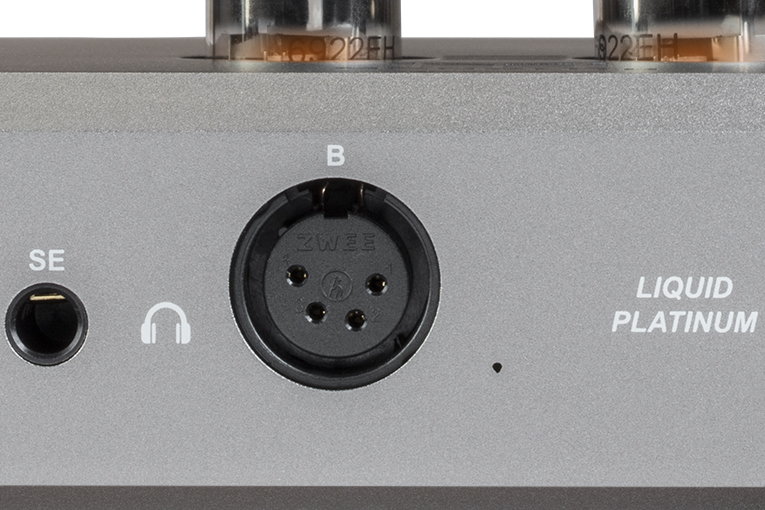 Listening to jazz singer/saxophonist Camille Thurman’s recording of “Cherokee,” from Inside the Moment (16/44.1 WAV, Chesky), through the Liquid Platinum and the Meze Empyrean headphones, I didn’t hear anything unusual -- the recording sounded as great as I expect it to. Switching to the Monoprice THX amp, I definitely heard more pronounced treble, and the finger snaps and rustling of clothing that are audible in the beginning of the recording became more audible. Thurman sounded a little softer and rounder through the Liquid Platinum, and the bass sounded fuller. The Audio-gd amp cut it somewhere in between, with mid-treble that was brighter than what I heard with the Liquid Platinum but not as bright as I heard through the Monoprice THX. Surprisingly, the top octave-and-a-half of treble sounded livelier with the Liquid Platinum than it did with the Audio-gd, with a little more presence and sense of space.

I dug deeper into the comparison between the two Monoprice amps with “Allegretto (March of the Pilgrims),” the second movement of Berlioz’s Harold in Italy, Op.16, performed by the San Diego Symphony Orchestra conducted by Yoav Talmi, with violist Rivka Golani and violinist Igor Gruppman (16/44.1 WAV, Naxos). Both sounded great with this selection, giving me much to enjoy and nothing to complain about. But I noticed that while the string section sounded a little treblier overall with the THX amp, the Liquid Platinum had a more lively upper treble with the strings, with more detail in the upper harmonics. 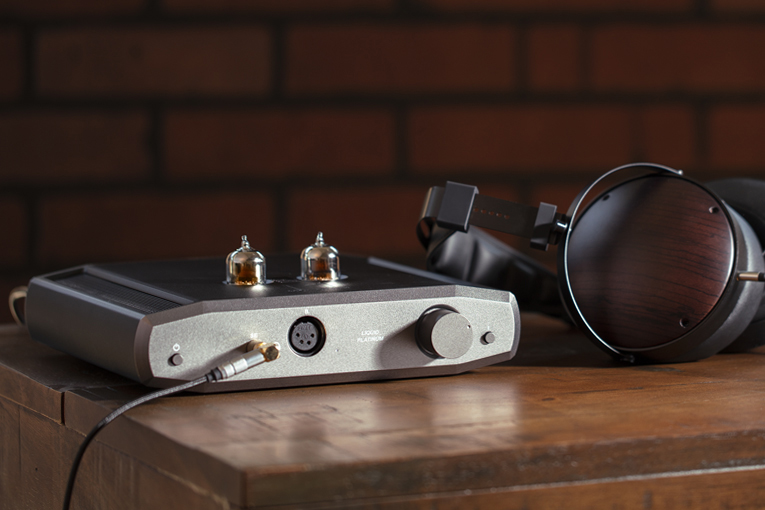 One of the problems in reviewing amps of any type is that the differences are usually so subtle. A speaker can have significant enough deviations from flat response that it can make Stan Getz’s bossa nova recordings sound grating, and I know that’s wrong. But amps don’t produce such huge anomalies. If an amp makes Getz sound slightly smoother or a little brighter, how do I know which is right?

To answer this question, or at least come closer to an answer, I’ve begun using a 2017 stereo recording of my group, Tonic Trio, playing the Latin jazz standard “Mambo Influenciado” at a small wine bar in Beverly Hills. It’s not a great recording -- I made it using a Tascam DR-40 recorder with its integral mics in an X-Y (crossed) pattern, and I later touched up the EQ slightly. But at least I was there, and I know what the instruments sound like in real life. The Liquid Platinum’s livelier top octave made the spoons that the bartender was rattling more clear and realistic, but the amp also made the bass a little fuller and bloomier than I’d like. The THX amp brought out the mid-treble more, making the spoons sound more annoying (especially when I switched to the slightly lower-treble-heavy Focal Stellias) and also making a door creak in the recording jump out more -- but it also tightened up the bass a bit. The Audio-gd amp gave me the clearest reproduction of my bass solo, but I felt the Liquid Platinum gave me a little more sense of the acoustical space.

Parsing the differences among headphone amps is usually difficult, and these differences are, in my opinion, usually overstated in reviews. Whether you’ll like the Liquid Platinum more or less than some other amp, I can’t say, especially since I don’t know what headphones you’ll use. But I can say that to my ears, the Liquid Platinum has slightly full-sounding bass, a slightly soft mid-treble, and a lively upper treble that makes live recordings sound just ever-so-slightly more live. I can also say that if it can easily drive the HiFiMan HE6se headphones, it can get any set of headphones cranking to the max and sounding their best. If you’re looking for a headphone amp under $1000 that can drive any headphones you might buy in the future, the Liquid Platinum is likely to please.