Beyerdynamic T 5 p headphones measurements can be found by clicking this link.

The new, second-generation version of Beyerdynamic’s T 5 p headphones embodies three trends I’m happy to see. First is a new interest in closed-back, audiophile-oriented headphones. I generally prefer the open-back sound, but many audiophiles must listen while surrounded by the sounds of family members or office colleagues, and open-back models let all that noise through. Second is an apparent trend toward a more natural, less treble-heavy voicing in audiophile headphones, which I noted in my review of the Sennheiser HD 800 S ’phones. Third is a trend toward greater sensitivity in audiophile headphones, to make them more practical to use with smartphones and tablets.

Inside the T 5 p’s ($1099 USD) are Beyerdynamic’s Tesla high-efficiency dynamic drivers (the driver size isn’t specified, but it looks to be 40mm). The drivers are mounted toward the front of the earcups and angled about 20° to fire into the ear canals. 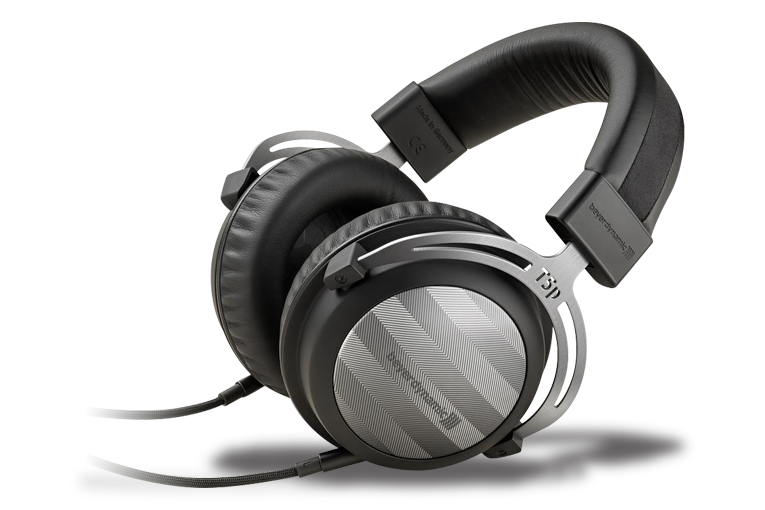 The cable is detachable, tipped at both ends with three-conductor 3.5mm plugs. An optional, balanced input cable 9.8’ (3m) long and tipped with a four-pin XLR connector at the source end costs $145. Both the stock and upgrade cables are audio only, with no inline mike or remote for controlling smartphone functions.

I haven’t said much in this intro, but the T 5 p’s are very straightforward headphones: nothing fancy or high-tech, just an apparent potential for really good sound.

The T 5 p’s rank among the most comfortable headphones I’ve worn. Their clamping force is moderate -- enough to ensure a good seal, but not enough to irritate my ears or temples. The size of the earcups accommodates my earlobes without pressing against them. The earpads’ “protein-coated surface” isn’t as sweat-provoking as most of the polymer-based earpad materials I’ve tried, and it doesn’t give me that itchy, prickly-heat feeling I get from pads covered in velour. 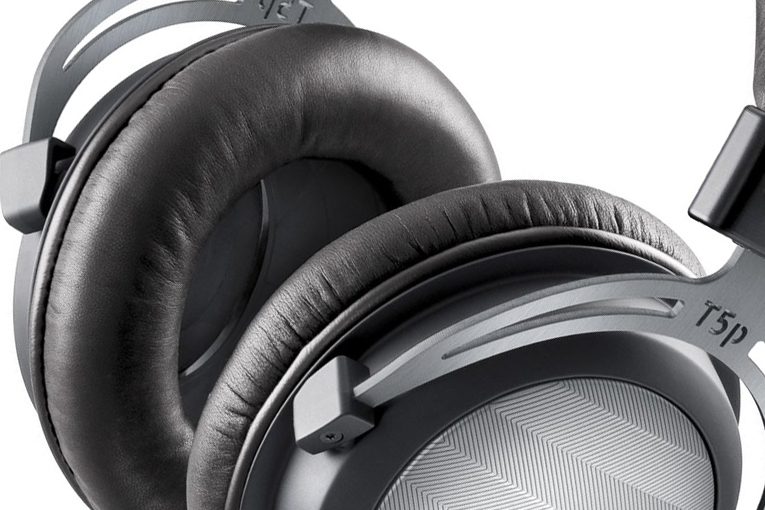 Even though the T 5 p’s are designed at least partly with portable devices in mind, their earpieces don’t fold, which means that the Beyerdynamics are really too big to lug around when traveling. But it’s nice to be able to plug them in to whatever you want to listen to without worrying whether the device can drive them.

The barrel of the 3.5mm connector on the source end measures about 0.4” (10.2mm) in diameter, which may make it too fat to work with some smartphone cases. But it worked fine with the cases of my Samsung Galaxy S6 and iPod Touch.

Because the T 5 p’s are at least partially designed for use with portable devices, I listened to them using my Samsung Galaxy S6 phone and Apple iPod Touch music player, as well as in a more traditional audiophile setup comprising a Musical Fidelity V90-DAC digital-to-analog converter connected to an Audio-gd NFB-1AMP headphone amp. I compared the T 5 p’s with the HiFiMan Edition X open-back planar-magnetic headphones ($1799) and the Audeze Sine planar-magnetic closed-back ’phones ($449). Sadly, I didn’t at the time have what I’d consider a set of real audiophile-grade closed-back dynamic headphones with which to compare the Beyerdynamics.

Beyerdynamic’s claim that the T 5 p’s can sound good when used with mass-market portable devices such as phones and tablets? Consider it legit. Even with jazz recordings that aren’t pegged to the max with dynamic-range compression, the T 5 p’s could easily play several dB louder than I needed when driven by my Samsung phone. 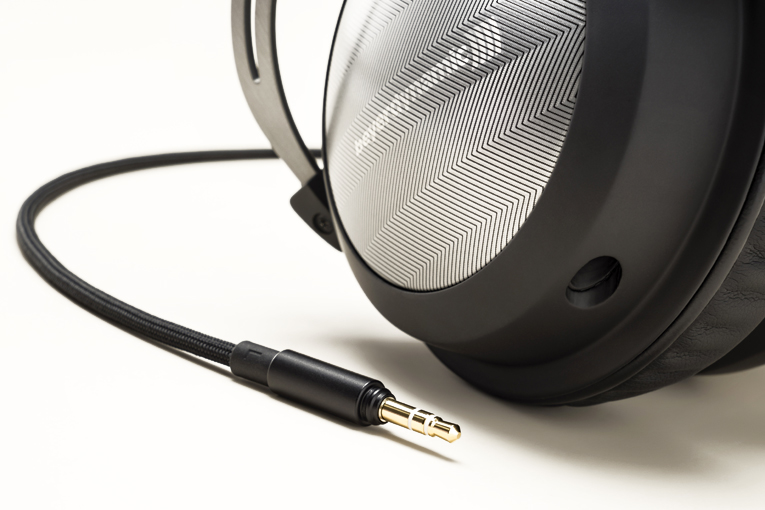 It wasn’t hard to get a handle on the Beyerdynamics’ quality. Normally, I eventually find flaws in an audio product, but I found none in the T 5 p’s. What I did find was a subtly bright character overall, as if someone had begun the voicing process with a flat response (or, at least, what I perceive as a flat response), then turned the treble control up a click or two. This produced a benignly mild treble emphasis with none of the downsides -- listener fatigue, edginess, coarseness -- that often accompany treble emphasis in lesser headphones.

When I played, on my Samsung phone, “Trinkle Tinkle,” from Thelonious Monk with John Coltrane (download, data rate and format unknown, Jazzland/Amazon Prime), it was easy to perceive the character of the T 5 p’s. In fact, I loved the way they reproduced the sound of this fairly crude live recording -- the sonic images of Monk’s piano and Coltrane’s tenor sax were distinct. Wilbur Ware’s double bass sounded full and grooving; there was plenty of bottom end, yet in his solo I could easily pick out the subtleties of his plucking. Shadow Wilson’s drum kit had a natural tonality, with the body of each drum evident -- but the Beyerdynamics’ little bit of treble boost made his ride cymbal stand out in the mix. 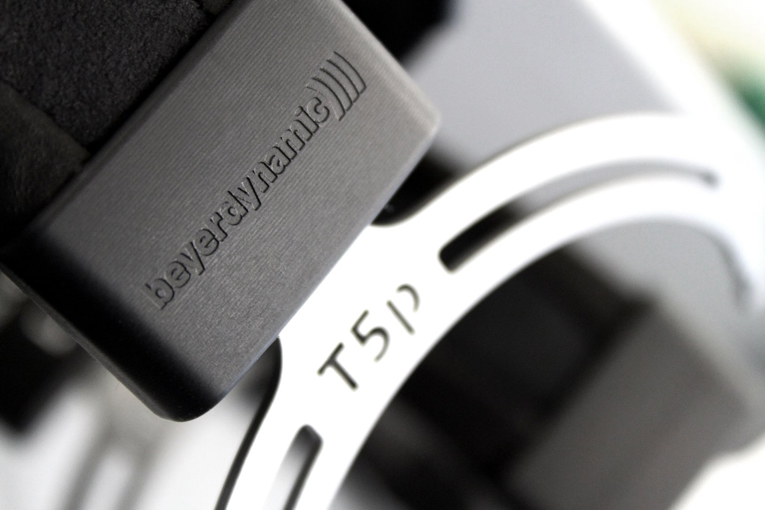 When I played an entirely different kind of jazz recording -- “Emma J,” from guitarist Spencer Katzman’s 5 Is the New 3 (16-bit/44.1kHz WAV, CD Baby), a 2007 studio recording -- the same character emerged. The T 5 p’s gave me a captivatingly big and vivid sound, but again, while the cymbals had a natural, brassy ring, they sounded emphasized in the mix. The T 5 p’s had a livelier, more spacious sound that the Audeze Sines, and less so than the HiFiMan Edition Xes -- but through the Beyerdynamics, the aural images of the guitar, double bass, and drums were much more precisely defined.

I noticed that slight extra kick in the treble with most of the recordings I listened to, mainly -- and often only -- in the cymbals. However, it also occasionally affected other instruments. In “King Contrary Man,” from the Cult’s Electric (256kbps MP3, Beggar’s Banquet), the T 5 p’s gave the thick guitar sound a little extra bite and definition that helped it stand out, and made the whole thing sound just a tad more kick-ass. This recording can sound grating through headphones that emphasize the highs, but it didn’t through the Beyerdynamics, probably because their quality was good, and their strong bass balanced out the highs well. 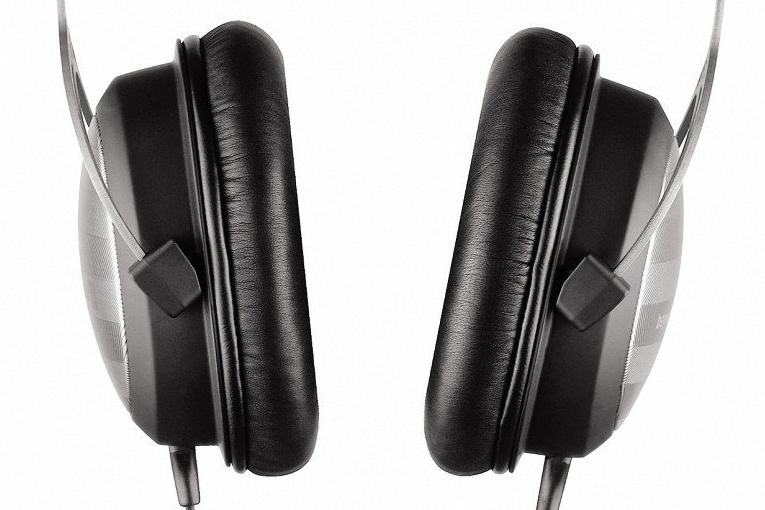 At this point I wasn’t surprised to hear the T 5 p’s also bringing out the splash cymbal in “King Contrary Man,” an element of the recording that had never before caught my attention, even though I’ve been listening to Electric since its first release, in 1987. Not only did the T 5 p’s emphasize the splash cymbal, they reproduced it with such clarity that I could also hear its sound reflected off the other cymbals and drums, and even got a sense of the splash’s position: down low in Les Warner’s kit, below his other cymbals.

I love to use Chesky Records recordings to evaluate headphones -- having attended one of their recording sessions, seen the gear they use, and worked with the label on its SACD and DVD-Audio test discs, I have a reasonably good idea of the sound they’re going for. We’ll Be Together Again, by the jazz trio Three’s Company (24/96 AIFF, Chesky), showcases the clean, spacious sound of Chesky recordings. In “Epistrophy,” I loved the way the T 5 p’s portrayed the big, resonant sound of Ron Carter’s double bass without sacrificing the details in the noises of his fingers plucking the strings and slapping the fingerboard. Nor did it emphasize those sounds, as some audiophile headphones do -- and as some audiophiles seem to enjoy. Javon Jackson’s tenor saxophone sounded exceptionally clear and spacious, with plenty of body, but also with a bit of emphasis of the slight spittiness in his tone.

I found the Beyerdynamic T 5 p closed-back model to be excellent headphones capable of bringing out the detail and space in any recording without sounding harsh or fatiguing. Their bass response was stronger than that of typical audiophile headphones, but better defined than that of typical mass-market headphones. Their extra little bit of treble response made them sound, to me, not completely neutral, but their overall quality and fidelity made it possible for me to enjoy even that slight deviation from a perfectly natural sound. And, of course, many audiophiles crave that little bit of extra treble, as long as it comes with no downsides -- and with the T 5 p’s, there were none.

E-mail: This email address is being protected from spambots. You need JavaScript enabled to view it.
Website: www.beyerdynamic.de

E-mail: This email address is being protected from spambots. You need JavaScript enabled to view it.
Website: www.beyerdynamic-usa.com

Brent Butterworth 8 hours ago The Biggest Lie in Audio
@Klaus ChristensenWe have fully arrived when it comes to predicting what speakers and headphones most people ...

Doug Schneider 9 hours ago The Biggest Lie in Audio
@Klaus Christensen"My point is (and it is the only point!) that we haven’t fully arrived."
I agree ...

Klaus Christensen 17 hours ago The Biggest Lie in Audio
@Doug SchneiderBasically we are in agreement!
The subjectivism versus the objectivism debate has been going on for ...