Monoprice M1060 headphones measurements can be found by clicking this link.

Audio enthusiasts may speculate that Monoprice has taken the M1060s’ design cues from HiFiMan, which in the last half-decade has become one of the most respected brands in high-end headphones. The headband design of the M1060s is almost identical to that of most HiFiMan models, and like most HiFiMan ’phones, the M1060s are open-backed, with planar-magnetic drivers. While the Monoprices cost the same as HiFiMan’s entry-level HE400S headphones, their wooden driver enclosures and plush, angled earpads of faux leather would seem to make the M1060s more comparable with HiFiMan’s HE560s ($899). 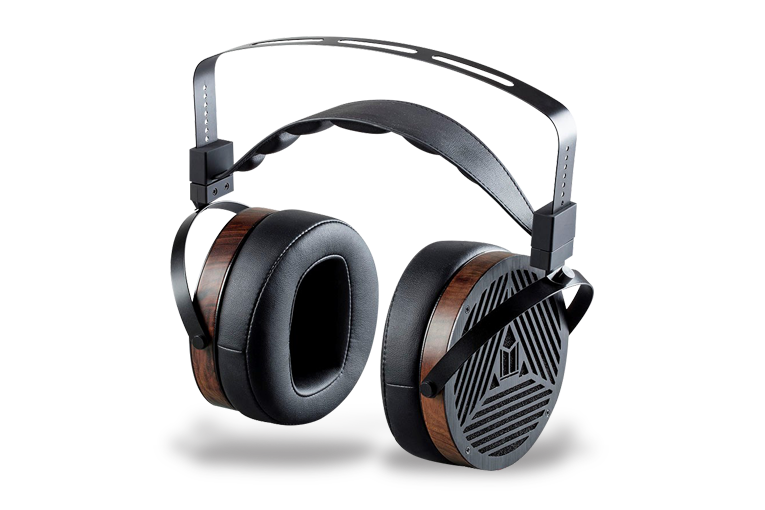 Planar-magnetic drivers have come to dominate the high-end headphone market. Instead of a miniature conventional speaker cone, as in most headphones, a planar-magnetic driver has a thin-film diaphragm, to the surface of which conductive traces have been applied; these serve as a voice coil. The diaphragm is suspended between magnetized plates. A varying electrical signal passed through the voice coil varies the coil’s magnetic field in analogous ways, which causes the diaphragm to move back and forth between the magnetized plates and thus created waves of pressurized air that we experience as sound.

While the M1060s are sensitive enough to play loudly when connected to a smartphone or tablet, they’re clearly intended for home use: They’re fairly bulky, and, like all open-backed headphones, they block almost no ambient noise.

While the M1060s are best suited to home use, they come with a semi-hardshell case that makes it pretty easy to toss them in the car to take along on a trip. This roughly circular case measures 11.5” in diameter by 5” thick -- too big to make it practical to pack into a suitcase. 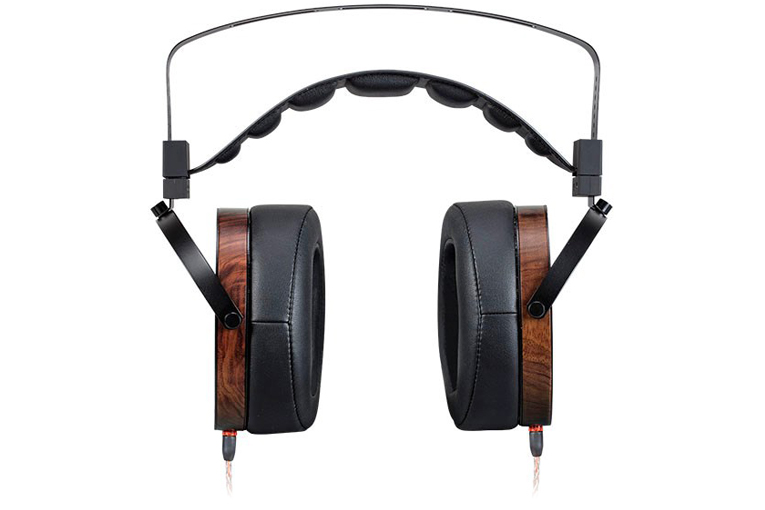 The M1060s come with a replaceable 6.5’, fabric-covered cable with an angled 3.5mm stereo plug on the source end and a 2.5mm plug that connects to each earpiece. The 3.5mm plug is one of the best I’ve seen, with a sturdy metal body and a design that makes it easy to resolder if the end of the cable is damaged. A 1/4” plug adapter is included.

The M1060s’ faux-leather earpads and moderate clamping force made them comfortable to wear for hours; nothing irritated me or pressed in an annoying way. The clamping force was much lower than with HiFiMan’s HE400Ses, at $299 the M1060s’ most obvious competitor.

The 2.5mm jacks on each earpiece have an uncommonly strong grip on the cable’s 2.5mm plugs. This makes it more difficult for them to be inadvertently disconnected, but also makes it less likely that the cable will safely detach if accidentally yanked.

Unlike some planar-magnetic designs, the M1060s are sensitive enough to achieve a satisfyingly loud volume from any source device, including my iPod Touch music player and Samsung Galaxy S8 smartphone.

In just my initial messing around with the M1060s, it was obvious that they were in the same sonic ballpark as some of the other affordable planar-magnetic models I’ve tried, including HiFiMan’s HE400S and Tidal Force’s Wave 5 (both $299). The response seemed essentially flat and uncolored, and I heard that lovely, compelling sense of space that open-back planar-magnetics tend to deliver. So far, so good.

One of my favorite albums of the last 20 years, blues singer-guitarist R.L. Burnside’s Wish I Was in Heaven Sitting Down (16-bit/44.1kHz WAV, Fat Possum), doesn’t sound in any way natural -- the vocals are backed with all sorts of electronic keyboards, turntable scratching sounds, and computer-generated percussion -- but it’s still a great test of fidelity because it spans such a wide range of the audioband. My favorite cut, “Got Messed Up,” delivered a tight, punchy groove through the M1060s, with well-defined bass, and plenty of grit and detail in Burnside’s vocal. The little electronic squiggles that percolate through the track were nicely spread around from left to right, and seemed to emanate from different distances. I didn’t think the bass sounded quite as powerful as the producers probably intended -- the Viso HP50, NAD’s well-regarded dynamic headphone model ($299), had more but less-well-defined bass. 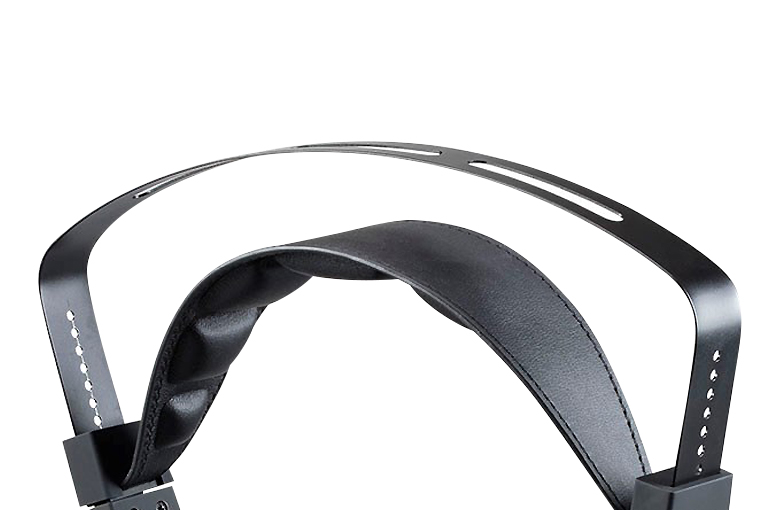 For my taste, the best track on Hudson, by a jazz supergroup consisting of guitarist John Scofield, keyboard player John Medeski, bassist Larry Grenadier, and drummer Jack DeJohnette (320kbps Ogg Vorbis, Motéma Music/Spotify), is the group’s haunting take on Joni Mitchell’s “Woodstock.” Through the M1060s, Grenadier’s double bass exhibited plenty of body and realistic detail, and a sense of breath -- exactly the sound I think most double-bass players would like to achieve. There was also a satisfying sense of space around the sounds of the guitar, keyboards, and drums. But did DeJohnette’s cymbals sound a little soft? It was hard to tell -- most jazz drummers use dark-sounding cymbals -- but the HiFiMan HE400Ses definitely brought out more ring and air in the high frequencies. The HE400Ses also brought out more sense of space in the piano and a tad more twang in the guitar, though the difference was fairly subtle. Hearing both, I doubt anyone would say that the HE400Ses sound bright or the M1060s soft.

Wanting to hear what the M1060s would do with “normal” material, I put on “Cousin Dupree,” from Steely Dan’s Two Against Nature (16/44.1 WAV, Giant). For planar-magnetics, the M1060s had surprising and welcome amounts of kick and definition in the bass, which I think it’s safe to assume is the sound Steely Dan always went for. The voices sounded smooth and accurate but less open, with a less natural sense of a singer performing in a room, than I’ve heard through some of my favorite headphones. A quick listen to the HE400Ses confirmed this: through the HiFiMans, the voices sounded more open and I heard more treble detail -- but I lost that sense of kick in the bass. The NAD Viso HP50s struck a better balance with this tune, giving me the mix of slamming bass and lively treble my ears crave. 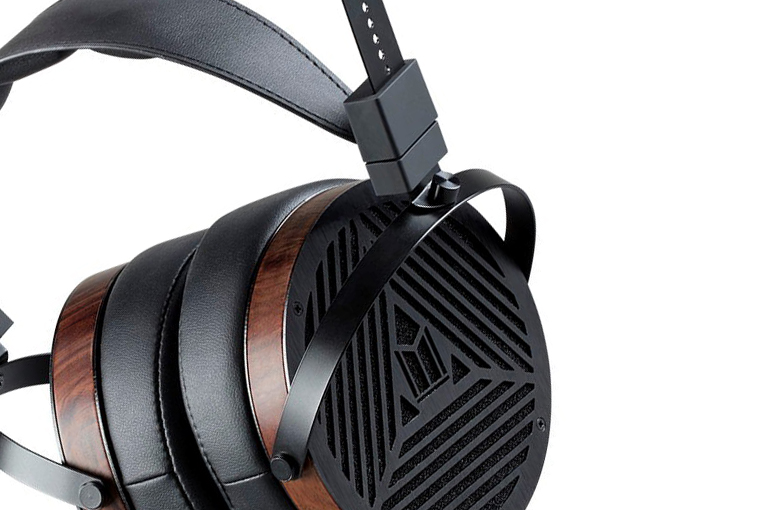 With Béla Fleck’s banjo, Edgar Meyer’s double bass, and Zakir Hussain’s tablas, all accompanied by the Detroit Symphony Orchestra led by Leonard Slatkin, The Melody of Rhythm (16/44.1 WAV, Koch) provides a suitable test of headphones’ ability to strike a good balance and get the sounds of all the instruments right. The third movement of Fleck’s title composition did indeed sound well balanced, the composer’s banjo singing out clearly, and the full resonance and power of Meyer’s double bass coming through. But I didn’t hear a lot of treble energy or as much sense of space from the orchestra as I might have expected. Through the HE400Ses, Meyer’s bass lost a little of its oomph but the recording sounded bigger overall, with a deeper, more detailed soundstage; the strings had a more lively sound, and the flutes exhibited a more realistic sense of space.

Listening to Albéniz’s Sonata in D Major, from classical guitarist Julian Bream’s Italian and Spanish Guitar Music (320kbps Ogg Vorbis, Heritage/Spotify), I was torn. The M1060s brought out the midrange on this recording, giving Bream’s notes a greater sense of dynamics and urgency. But the HE400Ses clearly delivered more sense of space -- when I put them on and played this sonata, I then pulled them off for a second, thinking I’d somehow connected my Samsung phone to my stereo system, and that the sound of the speakers and the room’s acoustics were leaking in through the headphones. But I hadn’t, and they weren’t.

The Monoprice M1060s are easily the best-made, most comfortable headphones I’ve tried for $299 or less. Their bass is stronger and better defined than I’ve heard through other relatively inexpensive planar-magnetic headphones, and they have a clean, clear, detailed midrange. But their treble response seems muted, which detracts from the detail and sense of space -- which is what attracts most audiophiles to open-back planar-magnetic headphones in the first place. If I had to choose a pair of $299 headphones to listen to for a couple of hours, I’d definitely pick the M1060s -- they’re supremely comfortable, and sound quite good overall. But they wouldn’t be my choice for an audiophile who wants to hear all the details in a recording, and get a realistic sense of the space in which that recording was made.