Sometimes I wish HiFiMan wasn’t such an efficient, well-run business. I can’t think of any brand that cranks out so many new models each year. Most are variants of a previous design. The company might update an existing frame with an improved driver, as it did with the new Arya Stealth Magnet Version headphones ($1599, all prices USD) reviewed here. Or it might cost-reduce an existing design so it can sell for less. Or it might introduce a Bluetooth version. It’s great that the company keeps offering new and improved (or new and cheaper) models, but for a reviewer like me, the pace tough to keep up with—and any model I review this year is likely to emerge in an updated form within about 18 months.

In the Stealth Magnet Version, the Aryas—themselves a variant of the original HE1000 headphones launched in 2015—get refitted with magnets shaped to allow a freer flow of air from the planar-magnetic diaphragm. This reinforces HiFiMan’s concept of putting as little mass as possible in front of and behind the diaphragm—something that certainly works with speakers, and seems to work with headphones. To the same end, the Aryas use HiFiMan’s “window shade design,” which protects the drivers with thin bars of metal rather than perforated sheet metal. 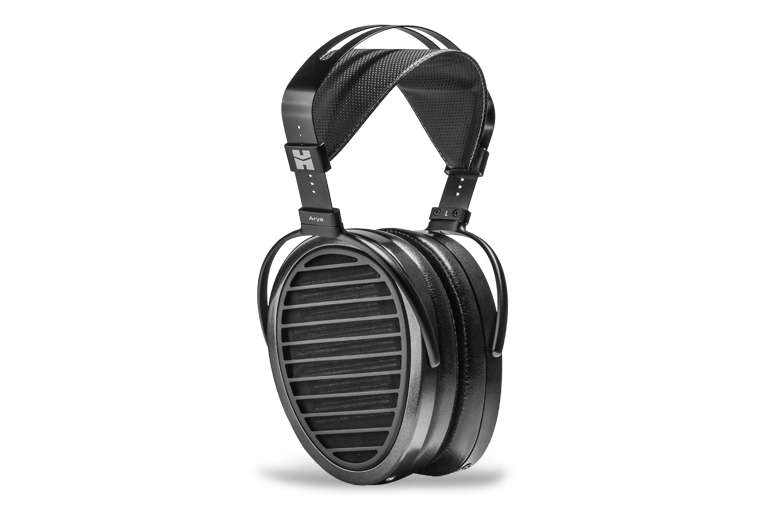 The Aryas mirror the asymmetrical, ear-shaped design pioneered with the HE1000 headphones. The earcups are among the few that are big enough for my oversized pinnae, although I know listeners with smaller faces complain that the bottoms of the earcups hang below their jawline. The biggest plus of the oversized earpads is that the clamping force can be high, to keep the headphones securely in place, but the pressure is distributed over a larger area, so it remains comfortable.

The rated impedance of the drivers is a very standard 32 ohms, but the rated sensitivity is just 94dB at 1mW of power, which may be too low for smartphones to drive to adequate levels. We’ll see . . .

The package includes the headphones and a 5′ (1.5m) cable with 3.5mm stereo plugs on both ends. This is a very common connector, so should you want a balanced cable, a longer cable, or a fancier cable, you can get one from HiFiMan or another vendor, or even make one yourself.

I already mentioned that this design fit me pretty well, and the perforated fabric on the faces of the earpads felt comfortable on my face. The headphones are also pretty light, unlike many headphones in this price range. 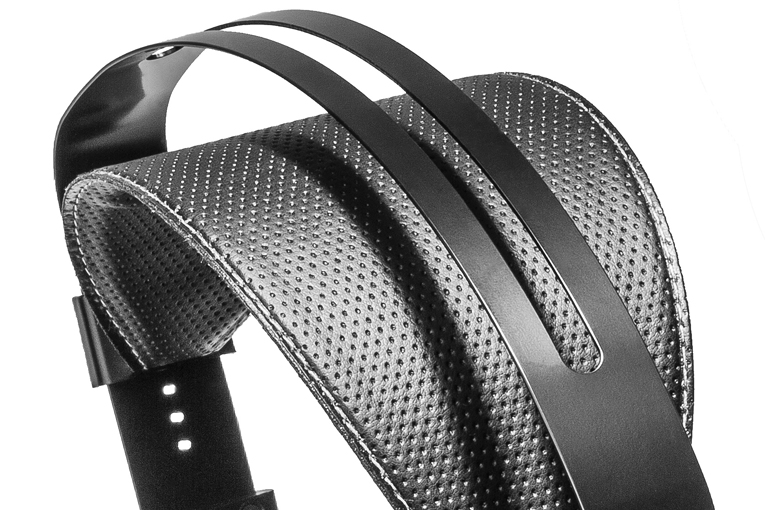 Adding an amp or a DAC-amplifier is probably a good idea with the Aryas, but it’s not an absolute must. At full crank from my Samsung Galaxy S10 phone, the Aryas played just loud enough on conservatively mastered material like Camille Thurman’s version of “September in the Rain” (Waiting for the Sunrise, 320kbps Ogg Vorbis, Chesky/Spotify). Still, I used them mostly with separate DAC-amplifiers: an AudioQuest DragonFly Cobalt (written about on SoundStage! Simplifi by Gordon Brockhouse) and an iFi Audio Zen DAC.

I’d guess I’ve reviewed at least 15 HiFiMan headphones, and after all that experience, I do have certain expectations. To wit, I expect them to sound a little bright—although some, like the HE400se headphones, don’t. So when I put on the new 40th-anniversary Super Deluxe version of Rush’s Moving Pictures (24-bit/48kHz FLAC, Mercury/Qobuz), I didn’t expect a fat, warm sound; neither bassist Geddy Lee nor drummer Neil Peart ever seemed particularly concerned with getting listeners’ feet tapping. But tunes like “Limelight” certainly didn’t sound thin through the Aryas—I fluctuated between thinking the Aryas sounded just right for Rush, or maybe needed 2dB more bass. Close enough either way. 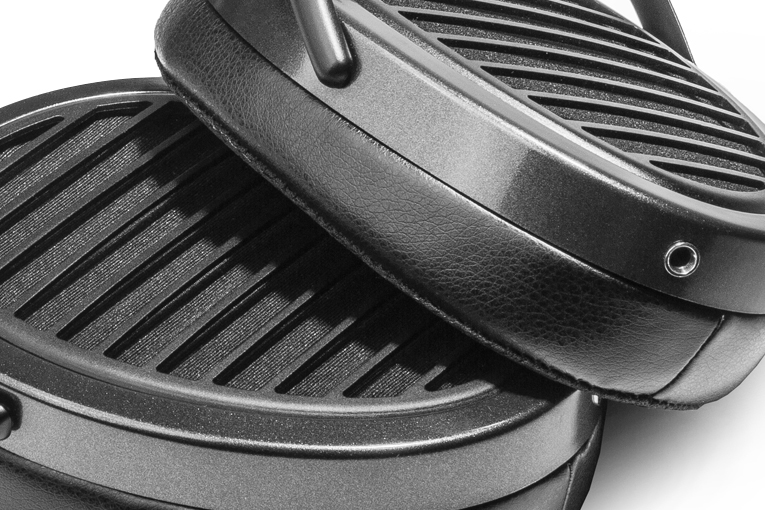 I think of Moving Pictures as a great creative accomplishment but not a particularly great-sounding album—but to my ears, the Aryas found everything they needed to find. There was plenty of detail in the rare moments when Peart’s subtle hi-hat work was given enough space to be appreciated, such as the opening of “Red Barchetta,” and I felt the portrayal of space seemed accurate for this album, recorded in the early days of digital effects.

To get an idea of how something heavier would sound through the Aryas, I put on a track I’d used in my review of the HE400se headphones: “Your Love Is Alright” from Trapeze’s Medusa (16/44.1 FLAC, Cherry Red Records / Qobuz)—another power trio, but one with a much bigger funk influence than Rush (although to be fair, even Celine Dion has a bigger funk influence than Rush). In that earlier review, I stated that “I actually kept turning up the volume because it wasn’t fatiguing in the slightest,” but this wasn’t the case with the Aryas. I was able to get them to a fairly loud level without fatiguing my ears, but didn’t dare turn up the volume another notch. But I absolutely loved the extra detail the Aryas brought to this tune. In particular, the hi-hat, the bongos, and the accidentally unmuted guitar strings really jumped out and made the whole tune sound simultaneously tighter and more spontaneous. A little bright, yes, but I liked it.

OK, what about the music these headphones were actually intended for—like maybe the headphone mix of “Graffiti Jazz No. 6” from David Chesky’s new album in Meta-Dimensional Sound, Graffiti Jazz (24/96 AIFF, Chesky). This tune sets an almost Dixieland-ish cacophony against a deep bassline with percussive bottom-octave bass notes—all of which sounded loud and clear, which shows that while the Aryas may have a slightly treble-heavy balance, they have excellent deep bass extension. I was surprised to hear that the Aryas’ outstanding detail didn’t result in an exaggerated sense of space—this album does sound exceptionally spacious, but the Aryas didn’t distract my ears with otherworldly echo effects, as some of the more treble-heavy headphones tend to do. It’s hard for me to say what’s “right” with a totally artificial, “in the box” recording like this, but I’ve heard Graffiti Jazz on all sorts of headphones since Chesky slipped me a few advance tracks back in December 2021, and through the Aryas, it did seem “right,” and in keeping with David Chesky’s stated aesthetic. 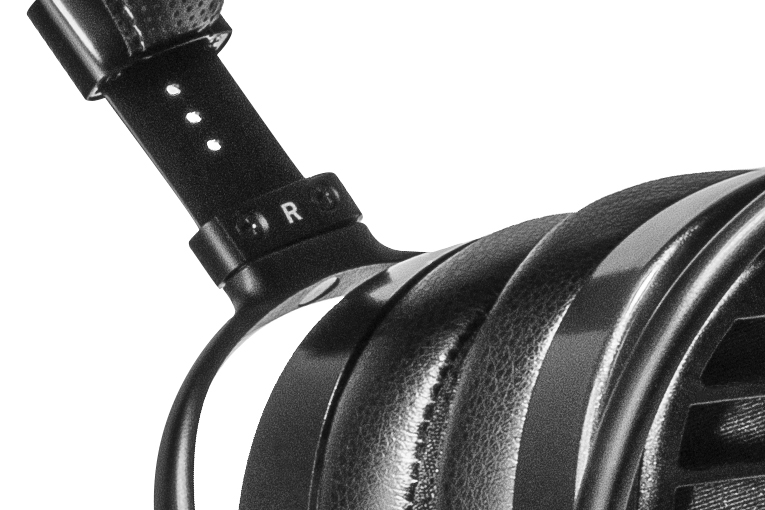 Still, I wanted to push the Aryas the same way a good sports car reviewer would want to put a car on the track to see what it can really do—so I put on yet another album I’d used in my review of the HE400se’s: violinist Hilary Hahn’s Paris (24/48 FLAC, Deutsche Grammophon / Qobuz). On my favorite movement, II. Scherzo. Vivacissimo, from Prokofiev’s Violin Concerto No. 1 in D Major, Op. 19, I felt like the sound of the Aryas was, from a detail and clarity standpoint, absolutely impeccable—I especially loved the way the little harp accents and flute flourishes jumped out and caught my ears. It did seem a tad bright in the triple-forte orchestral peaks that occur around 2:10. But I heard the same thing when I reviewed the HE400se’s. I wondered then if my amp was giving out, but that wasn’t the case here, because the Aryas have a 3dB-higher sensitivity rating and thus should require only half as much power as the HE400se’s to reach the same volume.

Usually, I prefer to dial up some mainstream audiophile fare for these kinds of comparisons, so I put on Patricia Barber’s Clique (24/176.4 FLAC, Impex/Qobuz). On my favorite tune from this album, “Trouble Is a Man,” these headphones all sounded generally similar, although I’d say my favorites were probably the Aryas and the RS2Xes.

All of them had a nice sense of spaciousness, sparkle, and detail in the highs. Probably the Aryas gave me the closest thing to neutral reproduction in this case, with just that small bit of extra brightness I mentioned previously. The HE6se’s sounded brighter still, and seemed to add a sense of congestion in Barber’s voice. Compared with the Aryas, the Grado RS2xes seemed to have a little extra upper midrange emphasis and some extra brightness. That made Barber’s voice sound a bit thinner, but I’d say the Grados’ tonal balance was the most vivid and compelling. As usual, the LCD-Xes had the most robust, bass-forward sound; they also seemed less open and spacious in the midrange, but the higher-frequency sounds seemed as spacious as with the other headphones.

For the most part, HiFiMan targets its headphones at audiophiles, and with the Arya Stealth Magnet Version headphones, I’d say the company hit the bullseye. I’d rank these headphones extremely high on detail, and their sense of spaciousness—while not quite as dramatic as I’ve heard with a few other audiophile headphones—sounded comfortingly realistic to me. And the bass is present enough and extended enough that I doubt anyone other than perhaps Dr. Dre might consider them bass-shy. They’re not cheap, but I’d say they deliver probably 98 percent of what most audiophiles want from headphones.