The Rolling Stones occupy but a few square centimeters of my vast musical landscape. I’m merely using the launch of the Crossfade 2 Wireless Rolling Stones Tattoo You headphones ($279.99, all prices USD) as an excuse to give a fresh listen to some V-Moda headphones, which I haven’t reviewed since before the company was sold to Roland in 2016. The company was started in the early days of the headphone boom by DJ Val Kolton. Its headphones built a strong rep among enthusiasts for sound quality, and among the stylish set for their cool looks and customizable cover plates. But when Roland bought the brand, it kind of shifted more into the pro audio realm, which I cover only sporadically. 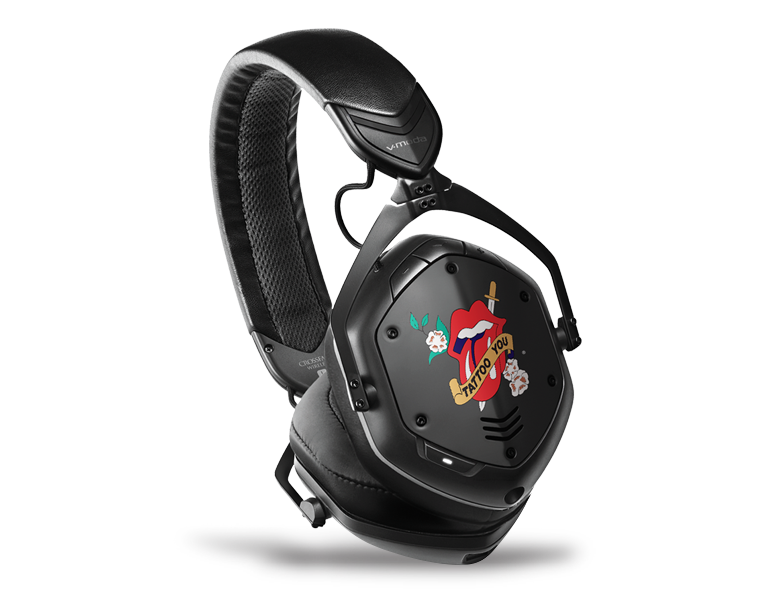 So yeah, there’s a Rolling Stones tongue logo on the side with the words “Tattoo You,” the name of the band’s 1981 album, which was their last to hit No. 1 on the US charts. It’s also available with a couple of slightly different Rolling Stones graphics. A new Jimi Hendrix version just came out, too. If this is the kind of thing you dig, then you dig this kind of thing. If not, you can opt for the standard Crossfade 2 Wireless headphones (also $279.99), which, for $34.99, can be laser-engraved with your own graphic design.

More important to me is that the Tattoo Yous feature the classic, distinctive V-Moda design. Inside each earpiece is a 50mm dual-diaphragm driver. V-Moda’s website doesn’t specify why we should get worked up about a dual-diaphragm driver, or even what exactly that means, but I gather the diaphragm has an outer ring optimized for bass and an inner ring optimized for treble. The headphones incorporate Bluetooth, with the basic version of the aptX codec in addition to the standard SBC codec. They can also be used with a wired connection. 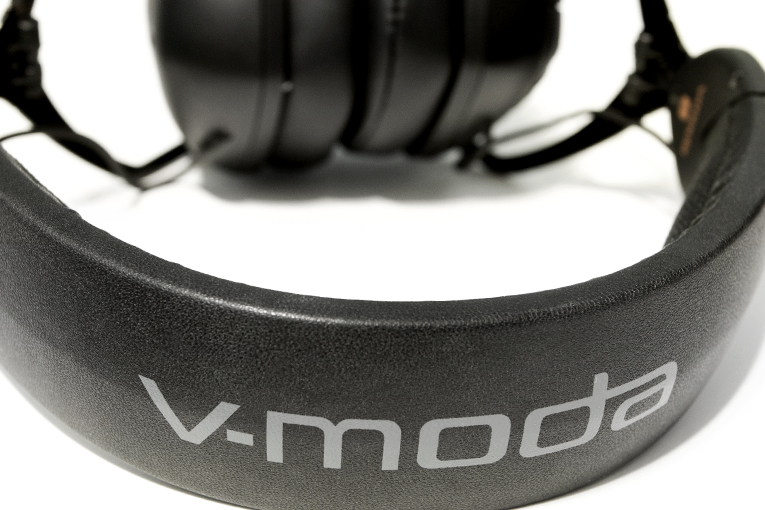 I wasn’t sure what to expect from the Tattoo Yous; previous V-Moda models I’ve tested ranged from bass-heavy DJ-oriented headphones to at least one model that seemed to hew pretty close to the Harman curve. And of course, it’s been six years since I heard a set. So let’s dig in . . .

The package includes the headphones, plus a 52″ (1.3m) cable with 3.5mm (1/8″) stereo plugs on the headphone end and a 3.5mm TRRS plug on the source end. The cable incorporates an inline microphone and volume control. A really nice, molded polymer case is also included, along with a 3.5mm-to-6.3mm (1/8″-to-1/4″) adapter and a Micro-USB charging cable. 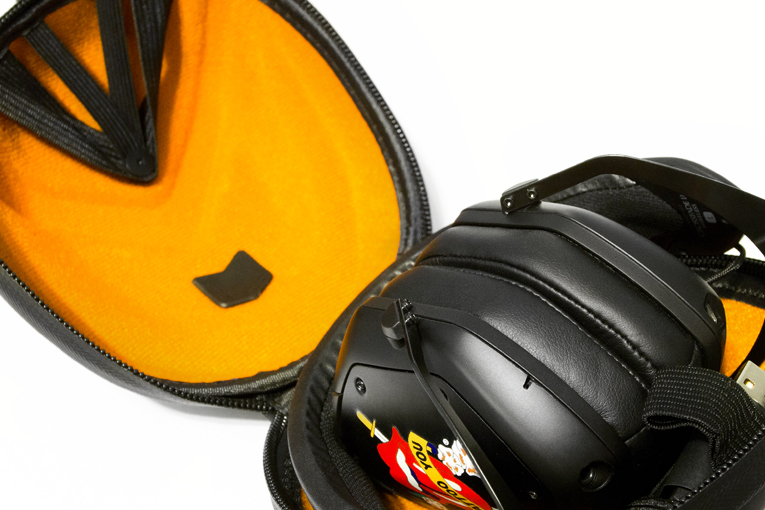 Whether you’d consider the Tattoo Yous an on-ear or over-ear design depends on the size of your ears. My ears are pretty large, and they kinda sorta fit inside the earpads, but still, the headphones mashed my pinnae somewhat. Plus, the clamping force is pretty high, and the earpieces only pivot back and forth a couple of degrees, so they have a limited ability to adapt to different head shapes. Thus, the Tattoo Yous weren’t very comfortable for me. 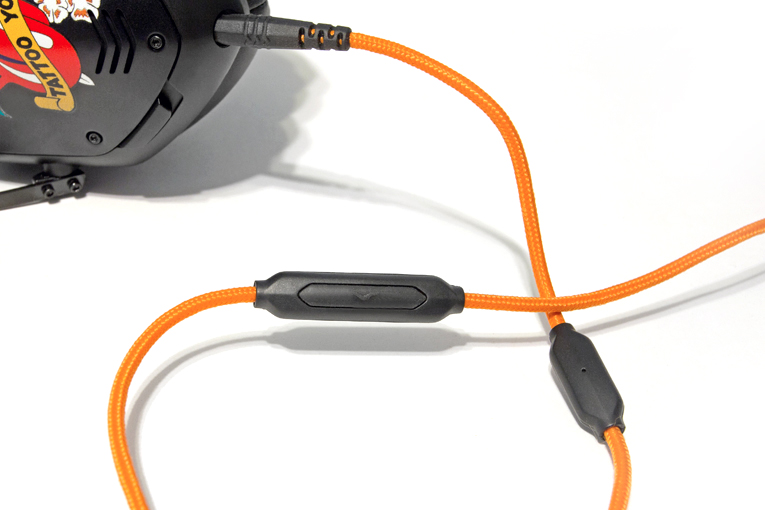 It’s a little annoying that V-Moda hasn’t switched this design over to USB-C, because that’s the standard now, and Micro-USB cables are getting harder to find in most homes. I review a lot of Bluetooth products, and it’s rare now to see a new one that charges with a Micro-USB jack.

I did like the control buttons along the top of the right earpiece. They’re pretty simple—just play/pause, volume up, and volume down—but they’re intuitive and easy to use by feel. You won’t even need to look at the manual.

I mentioned something above about some V-Modas being bass-heavy, DJ-style headphones. That’s the case with the Tattoo Yous, too. Listening to jazz double-bassist Manel Fortià’s Despertar piano trio album (256kbps MP3, Microscopi), I generally liked what I heard from about 300Hz on up, but below that, it sounded like Fortià had borrowed Metallica bassist Robert Trujillo’s amp stack. On “Circular,” the bass level sounded elevated by about 6 or 8dB, relative to what I’d expect to hear in a jazz piano recording. It also sounded bloated; some of the subtleties of Fortià’s plucking were blurred beyond audibility. Weirdly, I didn’t have any complaints about colorations with the piano and the drums; the timbre of the instruments seemed about right, even though the bloated bass tended to obscure any sense of spaciousness that might have existed in the recording. 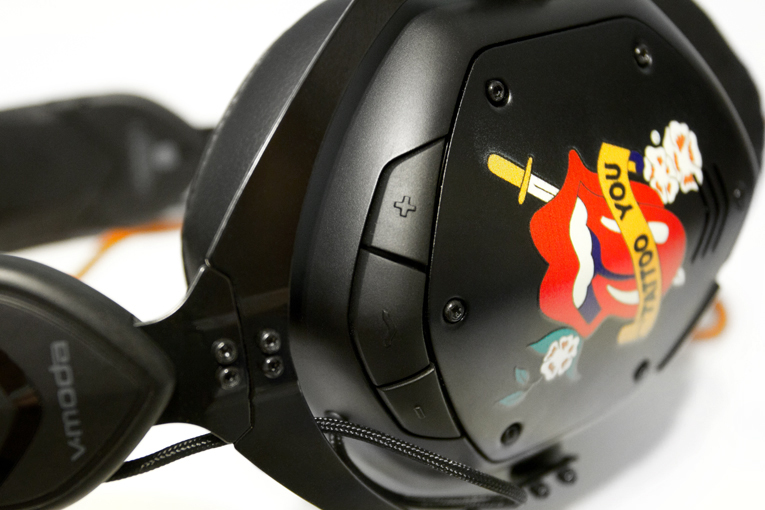 Oops. I guess I should have started by listening to some Stones tunes, right? OK, how about “Start Me Up” from Tattoo You (24-bit/44.1kHz FLAC, Polydor/Qobuz), which presumably would be somewhat better-sounding than the albums from their “imperial period” in the 1970s. The tune got off to a great start, with the heavily reverbed iconic riff cranking out loud and clear—but as soon as the bass came in, I started thinking, “There’s no way Mick Jagger and Keith Richards wanted this to sound like Bill Wyman [the bassist] was the bandleader.” I liked so much about the sound: the clarity of the vocals and guitar; the full, realistic timbre of the drums and percussion parts; and the general kick-ass-ness of the groove. But the bass was simply too loud. The kick drum, too.

At this point, I felt the need to make an authoritative statement, so I put on a tune where I know, better than anyone else in the world, what the bass is supposed to sound like: “Findango,” from my album Take2 with saxophonist Ron Cyger (16/44.1 FLAC, Outrageous8 Records / Qobuz). This tune hit No. 1 on the Roots Music Report jazz songs chart, so despite the fact that I mixed it, it possesses at least some reasonable degree of quality. (And it was mastered by veteran engineer Allan Tucker, which helped.) I really liked the way Ron’s alto sax sounded through the Tattoo Yous—warm, full, reverberant, detailed—but once again, the bass was way too loud, and also pretty dull, without the sound of the strings buzzing on the fingerboard that I go for. If I played this loud on a jazz gig, the leader would never call me back again.

To be fair, I realized I should put on some music more like what a DJ might play, so I cued up “Dumb Disco Ideas” from the electronic pop duo Holy Ghost! (Dynamics, 320kbps Ogg Vorbis, DFA/Spotify), an irresistible dance tune I’ve used as an occasional mood elevator since it was released nine years ago. Again, I loved everything about the sound—the clear vocals, the fantastic dynamics, the sense of space—except for the elevated bass level. Frustrated, I got into the equalizer on my Samsung A53 phone and brought the 63Hz slider down 6dB, the 125Hz slider down 4dB, and the 250Hz slider down 1dB—and voila! The irrepressible, danceable drive of “Dumb Disco Ideas” came through like it’s supposed to. 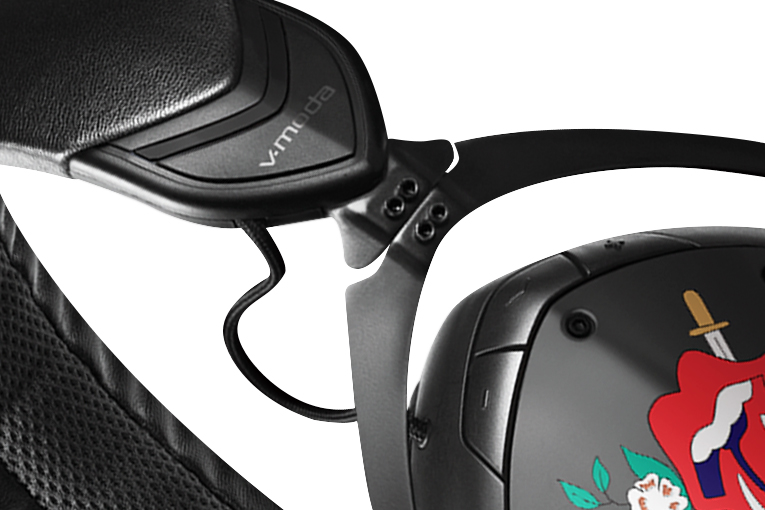 Look, I’ve heard the pitch about how DJs need more bass in their headphones because they need to hear the rhythm of the music they’re cueing up over the powerful bass notes coming out of the P.A. I guess that makes sense, although I’ve never DJed, so how do I know? Anyway, what DJ is going to use Bluetooth headphones with a Rolling Stones logo on the side? Especially headphones that don’t let you swivel one of the earpieces out so you can hear the P.A. and the crowd in one ear?

Now I needed an appropriate tune to use to compare these—not some frou-frou Patricia Barber album. I mean something with some serious dynamics and bass. I immediately thought of “LoveHate Thing” from Wale’s The Gifted (320kbps Ogg Vorbis, Maybach Music Group / Spotify), a lushly produced tune that combines heavy hip-hop bass with instrumental tracks that might not sound too out of place on a Steely Dan record. I have to say, this tune sounded pretty good on the Tattoo Yous—probably because it’s mixed with the expectation that the listener will have the bass cranked, so even with the Tattoo Yous’ bumpin’ bottom end, Wale’s rap, Sam Dew’s falsetto vocals, the acoustic piano, the congas, the funky electric guitar rhythms, the drum kit, and the backing vocals could compete with the elevated bass. Yeah, I’d have preferred less bass, but it worked nonetheless.

The Marshall app defaults to the Rock mode now; when I reviewed the headphones, they defaulted to the rather awful-sounding Marshall mode. And in the Rock mode, they definitely rocked on “LoveHate Thing.” There was plenty of bass, but not enough to obscure other elements of the mix, so the sound was a lot clearer and more spacious. I didn’t feel the need to indulge in any EQ at all.

I love the look of V-Moda headphones, and there are a lot of things to like about the sound. But the elevated bass takes me back to the early days of the headphone boom, when the success of Beats by Dre had everyone convinced that headphones had to have a ton of bass. Since then, we’ve learned a lot about what makes headphones sound good to most listeners—which is why we seldom hear headphones as bassy as the Tattoo Yous anymore. In my opinion, this model’s overdue for a revamp.

a1982 9 days ago Focal Bathys Bluetooth Noise-Canceling Headphones
Hi can you measure the 2022 utopia? no one had ever published details like csd ...