Most headphones look similar to other headphones, but Polk Audio’s Hinge Wireless on-ear model ($199.95 USD) is subtly different. Add to its looks good sound and easy use (for some), and you have headphones that are not just for the fashion conscious. Still, the Hinge Wireless has some problems . . .

No gimmicks here. The Hinge Wirelesses’ box is of cardboard, with a color picture of the model you’ve chosen on the front and selling points on the back. Inside are the headphones in a flannel carry bag, and two cables: USB-to-USB Micro, for charging the onboard battery; and a 3.5mm cable with an inline multipurpose control for using the Hinges in a wired connection. There are also an instruction book, a quick-fit guide, and registration information. 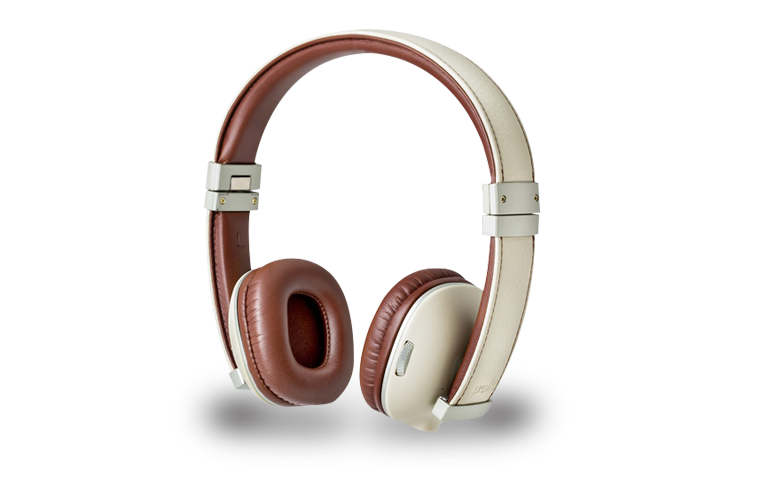 The Hinges are as good-looking as can be, and would look perfect on someone at the wheel of a leather-upholstered Lexus: the plastic has the cool, relaxed look of stitched leather, and the headband and hinges are of brushed aluminum. The plastic earcups are separated from the foam pads by a ring of aluminum. The Hinges are offered in three color choices: Black, Blue, or Camel.

The headband’s adjustable arms have 11 detented positions, and the Hinges’ hinges allow them to be folded to fit into the carry bag. At the bottom of the left earcup is the jack for the audio cable; at the bottom of the right earcup is a USB Micro jack for charging. The only things marring the Hinges’ smooth surfaces are an aluminum wheel on the back of the right earcup, and a discreetly embossed Polk logo at the bottom of each headband arm. While Beats and other headphone makers make their logos as big as possible, the Polk look is quietly classy yet instantly identifiable. The Hinges’ build quality seemed rock solid.

The Hinge Wirelesses are the first Bluetooth headphones I’ve used that don’t flash an annoying blue LED every so often. Their LED is actually an oval ring surrounding the USB Micro input: it glows red while charging, green to indicate that it’s charged, and otherwise white. 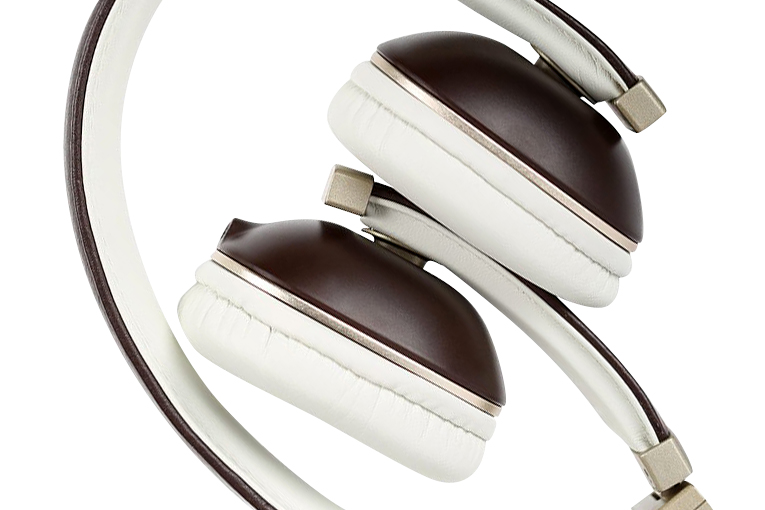 I found the fit of the Hinge Wirelesses average, not outstanding: fine as long as I held my head upright, but when I bent over, the Polks began to slide. They never fell off entirely, but I had the uneasy feeling that they might. I could lessen the problem by putting the headband in a raked-back position. Whether or not this will be a problem will depend on the shape and size of the user’s head; before you buy, think about what sort of activities you expect to be doing while wearing the Hinges.

The Hinges’ range of Bluetooth operation was average: about 25’ inside the house, or 30’ with no obstructions. Polk claims that a full battery charge lasts 12 hours, which conformed with my experience.

Pairing the Hinges with my iPod Touch (third generation) was easy, but no go with the Sony dongle I use with my iPod Nano (sixth generation). So I called customer service at Polk. During one of the best tech-support experiences I’ve had in a long time, I learned that the Hinges are not compatible with Bluetooth 2.0. If you have an older Bluetooth device, check with Polk before you buy. 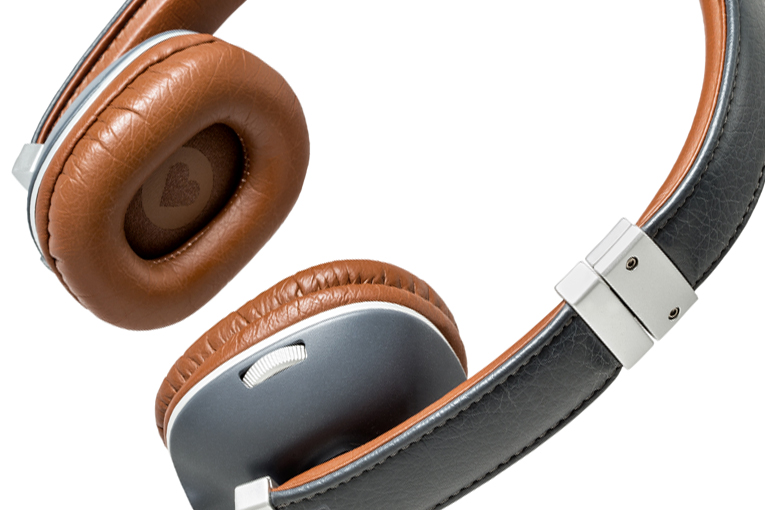 The Hinges’ control wheel is different from any other I’ve seen. It controls everything, and you’ll hate it or love it. Here’s how it’s supposed to work: swipe up or down to raise or lower the volume; press straight in to pause, and again to resume play; press twice in quick succession to skip forward a track, three times to return to the beginning of the track; press three times, then three times more to go back a track. There are also ways to answer a connected phone, but I didn’t go there.

While wearing the Hinges, I found I had to put four fingers on the forward surface of the earcup while using my thumb to control the wheel. I had a hard time getting even this to consistently work, even after using the Hinges for a week. Maybe it was my clumsy thumb. If you forget and press the wheel while you’re trying to adjust the volume, you’ll turn the Hinges off entirely. If you press twice too lightly, nothing at all will happen.

Those with thumbs nimble enough to do all that speed-texting that leaves me in the dust will probably love the convenience of an all-in-one control. I hated it.

In addition to that disadvantage (for me), there was another: the Hinges got hot after I’d worn them half an hour, causing me to perspire profusely.

The gorgeous sounds I heard from the Hinge Wireless headphones were almost enough to make me forget those complaints. The Hinges were the most tonally balanced headphones I’ve heard in some time: the highs, mids, and lows were neutrally reproduced, with just the right amount of each to produce a warm yet detailed sound. The soundfield was narrow; the marvelous spatial effects of the Monoprice 10585 Bluetooth headphones ($89.50) I reviewed two months ago have spoiled me -- now, almost everything else sounds narrow. The Monoprices also have better low bass -- but then, they have 50mm drivers. The Hinge Wirelesses produced plenty enough bass to please the normal person, and their low-end performance improved as they broke in. Oddly enough, when I used them in wired mode, the highs became somewhat aggressive and brittle, though the midrange and bass sounded about the same as in wireless mode. 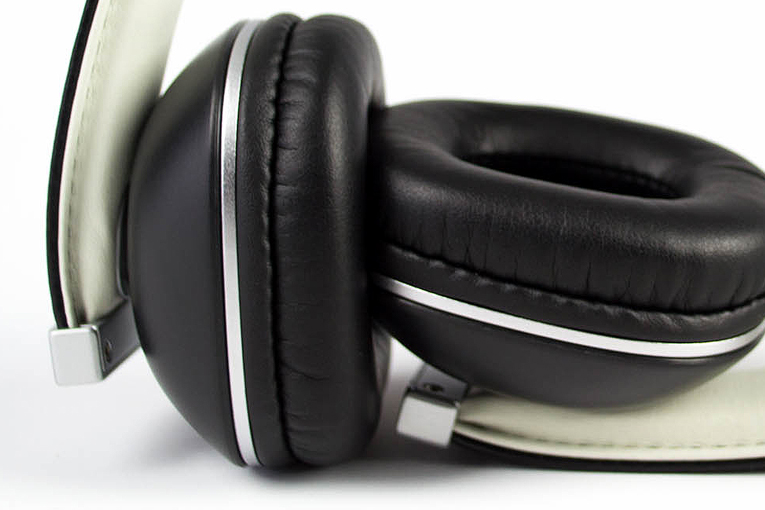 Ernest Ansermet and the Suisse Romande Orchestra’s recording of Tchaikovsky’s The Nutcracker (16-bit/44.1kHz ALAC, Decca) has always been my favorite, and it sounded great through the Hinges. The Waltz of the Snowflakes was absolutely beguiling, with its offstage chorus, swirling harps, and interjections of bronzed brass, the Polks keeping the various players clear and dynamic. I then listened to more snow scenes: Act III of Renata Tebaldi’s stereo recording of Puccini’s La Bohème, with Tullio Serafin conducting the Santa Cecilia Academy Rome Chorus and Orchestra (16/44.1 ALAC, Decca). The tinkly instruments sounded tinkly, with tremolo cellos underpinning it all with authority, and the off- and onstage cries of the soldiers guarding the city gate came through with great clarity. Grand opera sounded oh, so grand.

Having ascertained that the Hinges were an ideal fit for classical music, I tried some pop and found them pretty ideal for that, too. “Keepin’ the Road Hot,” from the Nitty Gritty Dirt Band’s Hold On (16/44.1 ALAC, Capitol), has twangy electric guitar riffs to burn, and aggressive singing -- most headphones get that right, and so did the Polks. But this track also has an all-important bass line that often gets lost through headphones. Not through the Polk Hinges -- Jimmy Ibbotson’s bass was balanced just right.

The bass ostinato in “Safety Dance,” from the soundtrack album Glee: The Music, Volume 3: Showstoppers (16/44.1 ALAC, Epic), had real power, with handclaps left and right, and the voices in the center sounding realistic. That track is followed by Lea Michele’s dramatic singing of “I Dreamed a Dream,” from Les Misérables, which begins with solo piano and expands to full orchestra and synth bass. I guarantee it: Through the Polk Hinges, this track will rock you.

While the Polk Audio Hinge Wireless headphones sounded terrific with all types of music, and presented a fashion image that I found undeniably cool, the difficulties I had in using their control wheel and the fact that I got seriously overheated after wearing them for only 20-30 minutes were serious drawbacks. The warranty also seems a bit short for $200 headphones. But they sounded so good that I think they’re still worth checking out -- those negatives might not be problems for everyone. But if your devices have only Bluetooth 2.0, you’ll have to look elsewhere.