Lately, it seems, I’ve reviewed nothing but over-ear headphones, which have become lightweight enough to be serious contenders in the portable-headphone market. Still, on-ear cans have some features that appeal more to people on the go; because they block out fewer external sounds, they let you have birds with your Bach -- and they’re safer to wear when you’re out and about. Wearing over-ear ’phones, you can get so wrapped up in the music that you can’t hear that quiet car approaching from the rear. On-ear models can also be cooler and more comfortable to wear over long periods. 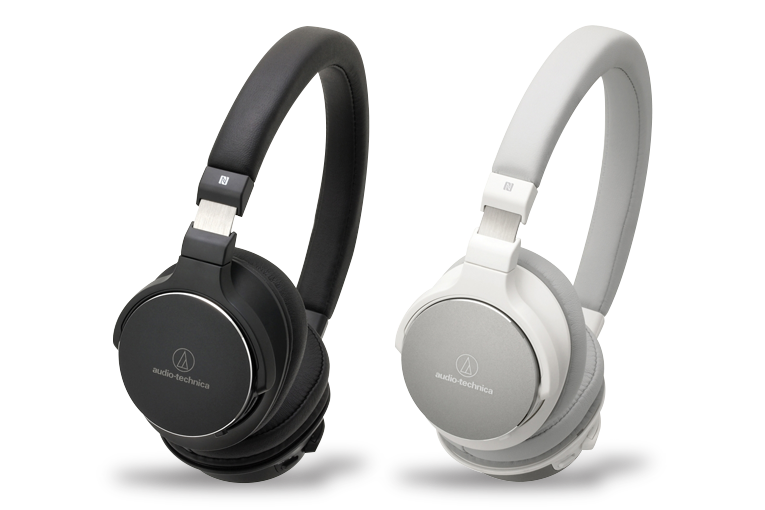 I was happy, then, to try Audio-Technica’s new ATH-SR5BT on-ear ’phones, which come in black or white. They turned out to have one outstanding feature that’s hard to beat, as well as a bunch of minor things you may or may not like. Their price of $199 USD seems a bit high, but others have found it justified by their quality.

The ATH-SR5BTs come in a plain outer sleeve with a photo of the model and the usual ad copy. Inside this is a box of black cardboard that contains the headphones, arrayed on a black plastic insert; in a sack of soft vinyl -- it will protect the headphones only from scratches, not real damage -- are the accessories. These include a USB-to-USB-Micro charging cord, a 3.5mm audio cord with an inline switch to control play/pause and other functions, and an actual instruction manual of 124 pages. But don’t get excited -- the instructions are printed in ten different languages; each gets about 13 pages. Still, that’s more than the usual tiny leaflet.

The ATH-SR5BTs measure 7.5” x 6” x 2.5” when unfolded (the earcups fold over flat, but that’s it). The oval earcups measure 2.5” x 3”, with an inner opening of 1” x 1.75”. The earcup armatures are adjustable in click increments. The construction is of metal and plastic, with generous cushioning on the earcups and the headband. At 6.5 ounces, the ATH-SR5BTs are the lightest “serious” headphones I’ve auditioned. 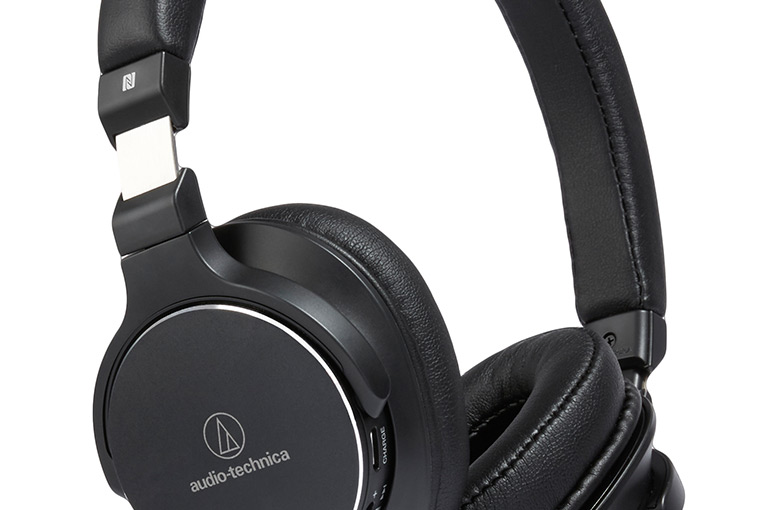 A-T has reverted to a cheap decal on each earcup that bears the Audio-Technica logo and name. They should have learned from the classy over-ear ATH-S700BT SonicFuel headphones, which I reviewed in February. On that model, the A-T logo is cast in the plastic, black on black -- classic, and very sexy. At least they’ve put the L and R indicators on the inside of the earcup arms.

Unusually, the controls are divided between the earcups. On the right cup is a tiny on/off switch. Everything else is on the left cup: the USB-Micro charging port, the 3.5mm audio jack, and a miniature, all-purpose joystick that controls forward, back, and volume, depending on how long and in which direction it’s pressed. Rock it to the left once and it raises the volume a notch; hold it down and to the left and it plays the next track. Push it straight in to pause. To the left of the 3.5mm audio jack is what might be the world’s smallest LED; it indicates Bluetooth and battery status.

The overall build quality is neither rock-solid nor fragile. My guess is that, as light as the ATH-SR5BTs are, and with all their padding, you could drop them without causing serious damage. 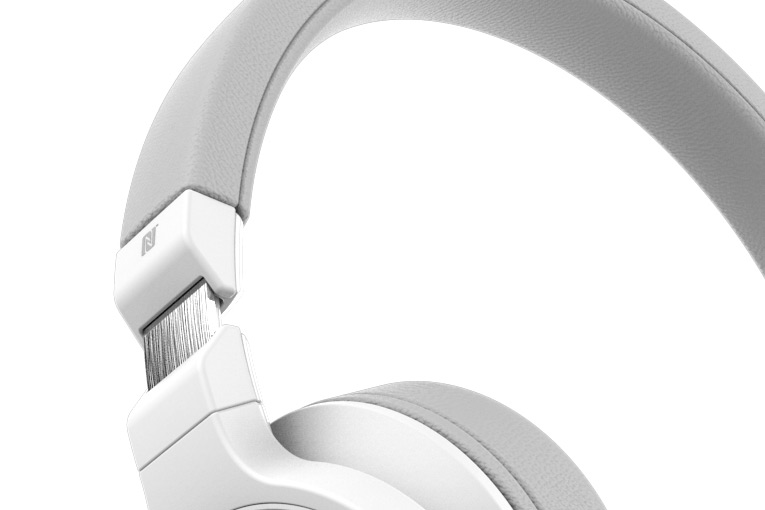 Some interesting specifications: The dynamic drivers are 45mm in diameter -- large for on-ear ’phones. The ATH-SR5BTs are a closed-back design with a claimed frequency range of 5Hz-40kHz -- which earns A-T the right to print the High-Res logo on its packaging. The impedance is 45 ohms, the sensitivity 103dB/mW. The Bluetooth version used is v4.1, with aptX, compatible with Bluetooth profiles A2DP, AVRCP, HFP, and HSP.

That amazing feature I mentioned at the beginning: The battery, which takes five hours to charge, provides up to 38 hours of continuous play (or 1000 hours of standby).

The fit was a bit delicate. These are headphones you definitely want to try on before buying. Any Bluetooth headphones should fit snugly enough to give you almost complete freedom of motion. The ATH-SR5BTs had to be canted back on my head; if they weren’t, they slipped forward and, eventually, off during some gym activities, or even when I gardened -- anything that required me to tilt my head forward.

But once properly positioned, they were light and unobtrusive, and easy to forget except for the high quality of music they pumped out. The range of wireless operation was about 22’ around the house, 30’ outdoors.

I found the ATH-SR5BTs’ controls a bit difficult and nonintuitive to use. For one thing, that virtually invisible LED isn’t, as you’d expect, next to the on/off switch, but to the left of the 35mm audio jack. If you’re concentrating on the switch, you have to shift your eye double-quick to the other earcup to catch the LED; moreover, you have to rotate the cup forward to be able to see it. The multipurpose joystick was easy to use, once my fingers remembered where it was, but it was a bit tricky to figure out the difference between a short and a long press. If you use these headphones regularly, it should be no problem to learn. If you like to swap out headphones from your collection, you may find it hard to remember where this switch is.

I was surprised to find that, since the ATH-SR5BTs are on-ear ’phones, my ears got hot after only 15 or 20 minutes’ use, and that I sweated more profusely than I have with any other headphones I’ve tested this year.

Via Bluetooth, the ATH-SR5BTs played at average volume levels -- not the loudest I’ve heard lately, but loud enough, unless you’re hell-bent on destroying your hearing. Wired, they went plenty loud with no noticeable distortion. Since the ATH-SR5BTs are on-ear ’phones, they blocked little outside sound. I’m wearing them right now as I sit at my computer, and I can hear the swish of the washing machine in the kitchen, a room and a short hall away. 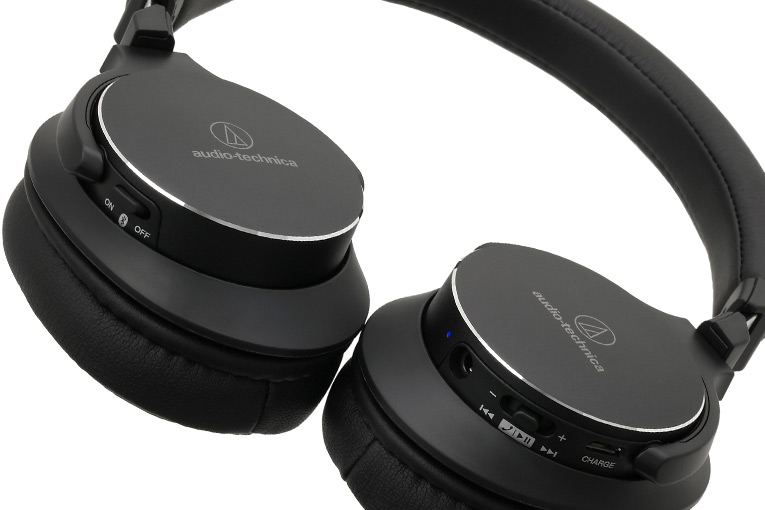 I found the ATH-SR5BTs’ overall sound hard, with an emphasis on well-focused mids and highs. The highs really crackled, without distortion but with knife-like precision, and proved pretty demanding when I listened to my gym mixes, which tend toward constant, driving percussion. Despite the A-Ts’ large drivers, the bass wasn’t particularly noticeable. At the opening of Vaughan Williams’s A Sea Symphony, in the recording by Sir Adrian Boult and the London Philharmonic (16-bit/44.1kHz ALAC, EMI), the brass fanfare was outstanding, but when the full orchestra comes in, I became more aware of the swirling woodwinds and harp than of the pedal tone from the basses and organ. It’s there, but I have a feeling I heard it only because I know it’s there. Mid- and upper bass fared better, depending on the recording. Pumped-up bass and drums in rhythmic music were pretty good -- these headphones fared much better with rock, pop, and dance music than with classical.

The sound of Emil Gilels’s piano in his near-definitive recordings of the Brahms piano concertos, with Eugen Jochum conducting the Berlin Philharmonic (16/44.1 ALAC, Deutsche Grammophon), reminded me, all too rudely, that the piano is a percussion instrument. The operative words were brittle and not nice.

All of these observations were made with the Astell&Kern AK Jr via a wired connection. When I switched to Bluetooth and my iPod Touch (fifth generation), things sounded much better. Bluetooth seems to compromise the frequency response a bit, which compensated for the natural bent of the ATH-SR5BTs. I concluded that these headphones were actually designed for use with Bluetooth, with wired functionality included only as a convenience.

The sounds of the pianos in music such as Ben Folds’s were fine with all four of his albums that I’ve loaded onto my Touch -- there was still a lack of deep bass, but the results were a lot more listenable than the wired AK Jr connection. I wanted to try the AK Jr via Bluetooth for an exact comparison, but try as I might, I couldn’t get the Astell&Kern to pair with the ATH-SR5BTs. (The A-Ts paired with the iPod Touch in just two seconds, and never had to be paired again.)

If you want on-ear headphones that deliver a driving midrange and highs to juice up your workout or yardwork, the Audio-Technica ATH-SR5BTs might be just the headphones for you. They have a very long playing time, and their joystick multicontrol is easy to use, once you get used to it.