How Much Noise Do Your Headphones Really Block?

The last ten years have seen a renaissance in headphone science. Important new research into frequency response and tuning has already improved the quality of headphone sound. But I’ve seen no research into something almost as important: isolation, or the degree to which headphones block outside sounds from reaching your ears. The less such isolation you have, the more your music will be polluted by the sounds around you. That’s no problem in a quiet listening room at home, but on a passenger jet or in a crowded Starbucks, it’s impossible to get good reproduction of music unless your headphones isolate your eardrums from the ambient sounds of such environments.

Although I’ve measured the isolating properties of hundreds of headphone models and travel-tested at least 100 of them, a comment on Facebook made me realize that I needed more insight into this topic. Responding to a question about which noise-canceling (NC) headphones to buy, a fellow audio writer confidently advised that custom-molded earphones provide the most isolation, followed by universal-fit earphones, then by NC headphones, then by conventional headphones. I knew from my measurements and personal experience that his statement was at least partly wrong. I also realized that I didn’t have enough data to prove it.

Specifically, I had no way to test the isolating properties of custom-molded in-ear headphones, which completely fill the ear canal, and thus should do a great job of blocking sounds. But it dawned on me that the recent introduction of the G.R.A.S. Sound and Vibration KB5000 -- a simulated pinna with an anatomically accurate human external acoustic meteas, or ear canal -- now makes it possible to do these measurements. 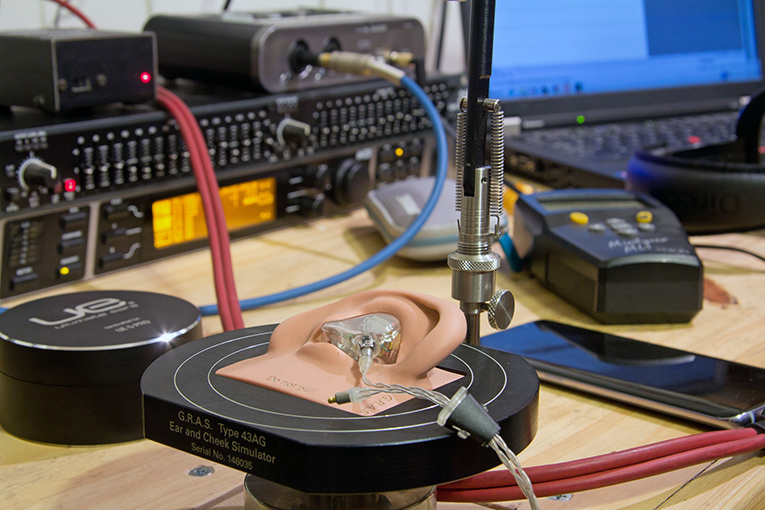 All I needed was an earphone custom-molded to fit the KB5000. When I told Mike Dias, sales director of Ultimate Ears, what I hoped to do, he immediately offered to supply one. I drove down to the Irvine, California, headquarters of Ultimate Ears with the KB5000 and the accompanying Model 43AG ear/cheek simulator, and watched as a technician used a laser scanner to create a 3D profile of the KB5000. The company then input this profile into a 3D printer to create a custom Ultimate Ears UE 5 Pro earphone that perfectly fits the KB5000.

I was now ready to do something that, to my knowledge, had not been done before: a precise, objective comparison of the isolation of every different general type of headphone and earphone.

The following charts show how much noise these earphones and headphones attenuated. I measured this using pink noise at 85dB SPL, coming from four speakers placed around my lab, plus a subwoofer. The red line shows the level of the sound at the entrance to the KB5000 ear canal with no headphone covering it or earphone inserted in it. For each headphone or earphone, the lower the trace on the chart, the more exterior sound is attenuated. 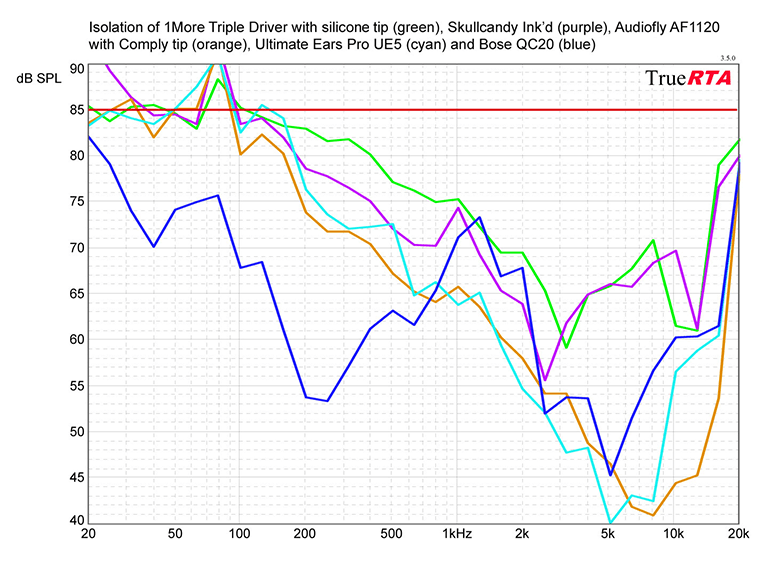 You can see from this chart how dicey it is to make broad statements about the isolation provided by different earphones. It’s clear that the NC model, the Bose QC20, does a far better job of rejecting noise in the band where most airplane cabin noise occurs (ca. 100-1000Hz). You can also see that the standard models fitted with silicone eartips (the 1More Triple Driver and Skullcandy Ink’d) provided the least isolation, especially below 1000Hz. (Fitting one of the included foam eartips to the 1More Triple Driver improved its isolation by a few dB.)

The most interesting findings for me were that the custom-molded earphone provided the best isolation above 1000Hz, where most hearing damage occurs (which is why these are great for performing musicians), and that an earphone with over-ear cable routing -- which, properly designed, allows the earphone to fit deep into the pinna and almost totally block the ear canal -- can more or less match the isolation of a custom-molded earphone if it’s fitted with a suitable foam eartip, and if its design fits your ear canal. 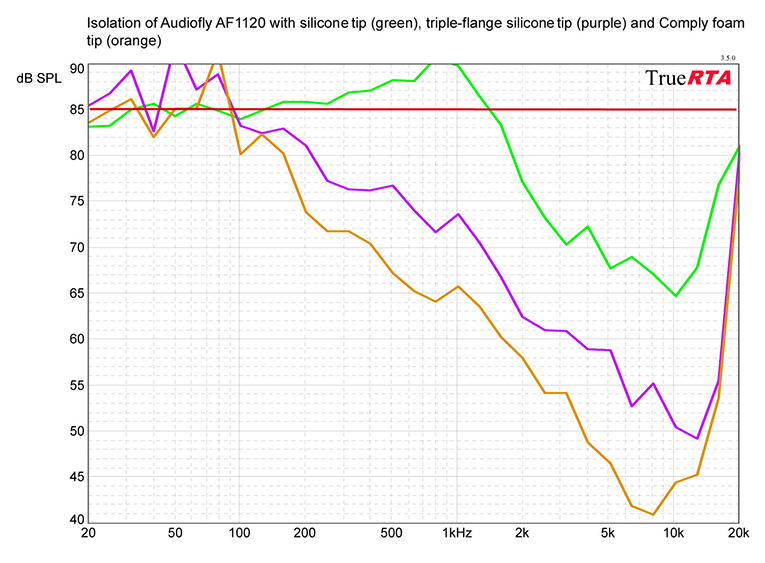 After seeing how well the Audiofly AF1120 performed in the above test, I decided to measure its isolation with two of the other provided eartips: a conventional single-flanged silicone tip and a triple-flanged silicone tip. You can see in the chart above that the choice of eartip made a huge difference in the degree of isolation, and that using the silicone tips degrades the isolation. 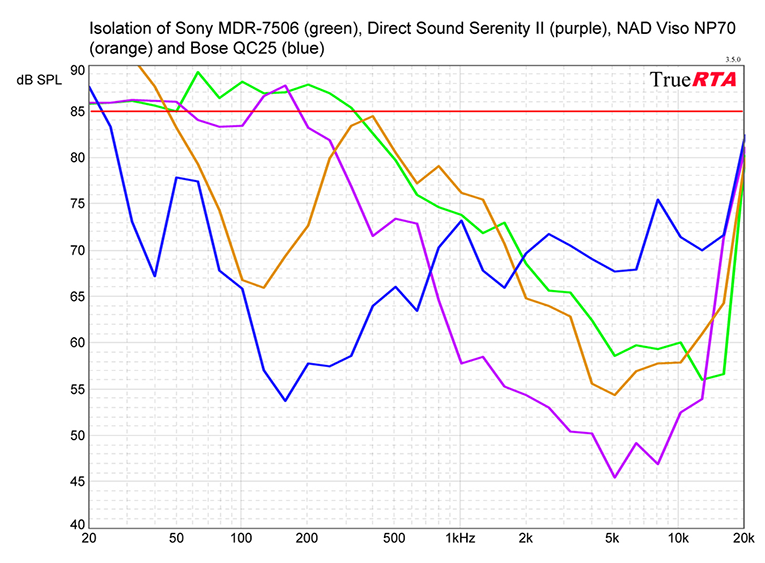 The chart above shows the isolation of a few over-ear models. One thing that’s especially important to note here is that the passive models -- i.e., the ones that don’t employ active, electronic NC -- offer very little isolation at frequencies below 1000Hz, which means they’ll do little to reduce airplane cabin noise, most of which occurs below that frequency. Those who use passive-NC headphones because they think that the extra circuitry required for active NC adds noise to the signal should weigh any benefit they might be getting in sound quality against the fact that their music is being polluted by a lot of noise below 1000Hz.

Because it’s difficult or impossible to grasp what these measurements and graphs of various levels of isolation sound like, I decided to demonstrate it by using the same speaker-and-subwoofer system to play a mix of noise recorded on four different passenger jets, played at a level of 82dB SPL, then recording the noise that entered the microphone in the Model 43AG ear/cheek simulator with the headphones and earphones playing music. The music was the first chorus and verse of “Childish Things,” by New York singer-songwriter George Stass, who graciously allows me to mangle his music for my audio tests. When you listen to these demos (see below), you can hear a pretty good simulation of what it’s like to use these products while flying.

A little experimentation showed me that this process would be more complicated than I’d expected. I ended up having to use a Behringer DEQ2496 digital audio processor to cancel out the transfer function of the RA0402 ear simulator incorporated into the Model 43AG ear/cheek simulator, otherwise you’d effectively be hearing the noise through two ear canals: your own and the RA0402’s. I also used a DBX 215 graphic equalizer to EQ the signal going into the headphones and earphones. This produced a subjectively flat, level-matched response curve in all models, so that you’d be judging only the isolation of the headphones, without being distracted by their different frequency responses.

You can hear the results in the two videos posted below. It’s probably best if you listen through headphones (passive models, or NC models with NC turned off) at a fairly loud level, considering that you’re likely to listen a little louder on an airplane. You can also listen through a decent stereo system. Don’t expect to hear much if you listen through the speakers built into your laptop computer -- their limited bass response will filter out much of the airplane cabin noise.

This won’t perfectly match what you hear when you fly, for three reasons. First, cabin noise varies greatly from jet to jet -- the newest ones, such as the Boeing 787, are several dB quieter inside than, say, the 737 -- and the noise level varies depending on where you sit in the plane. Second, the amount of isolation you get depends in part on how well your headphones -- or, especially, earphones -- fit you. Third, I chose what for me was a comfortable average listening level. If you listen louder, you’ll hear less cabin noise and more music; if you listen at a quieter level, you’ll hear more cabin noise and less music. Still, it’s a lot more practical than trying to pack along a large collection of headphones and earphones as carry-on luggage to conduct your own tests in-flight.