Is It Possible for Headphones to Sound Fast? (Or Slow?)

In audio, as in so many fields, language unites us and divides us. Specifically, I’m talking about the use of technically questionable and scientifically unquantifiable jargon in subjective reviews. To subjectively minded audio enthusiasts, this is just an honest attempt to describe what they’re hearing. But to objectively minded audio enthusiasts, this jargon—terms like “inner detail,” “microdynamics,” and “texture”—may suggest the reviewer’s grasp of their subject is informed more by reading other reviewers than by digging into technical books and scientific papers.

I’m nothing if not open-minded. (To which some subjective reviewers might respond, “Fine, then—you’re nothing.” Touché.) While it’s tempting, and often accurate, to dismiss fuzzy audiophile jargon as little more than an attempt to puff up reviews of prosaic products, my initial thought is always, “Maybe they heard something, but they just chose inappropriate terms to describe it.” That’s what I thought when a reader recently asked me if there’s really any such thing as “fast” headphones. 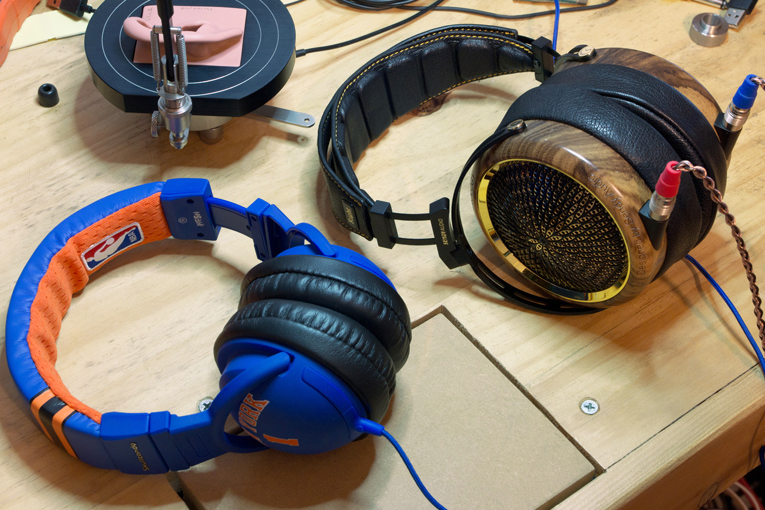 From a technical standpoint, my former colleague at Sound & Vision, Dan Kumin, dispelled the notion of a “fast” audio product in an email chain about subwoofers way back in 2010 or so, where he said something to the effect of, “If the frequency response of the subwoofer is flat within the bandwidth required for the application, then it is by definition as fast as it needs to be.” To extend this rule to the rest of the audio spectrum, a product that’s flat to 20kHz doesn’t reproduce a 20kHz tone any slower than one with more extended bandwidth, lighter drivers, etc.

In amplifiers, speed is specified as slew rate, which refers to the rise in voltage or current over time. A typical slew rate for an amp might be 60V per microsecond. But that’s not really a significant spec for audio applications. Let’s break it down. A 60V peak with an 8-ohm speaker load is 450W—beyond the peak output capability of most amplifiers—so that basically means the amplifier can reach its peak output in well under a microsecond. Peak output would occur at one quarter of a wavelength, so the maximum frequency in question would have a period of 4 microseconds, which equates to 250kHz—more than three octaves beyond what’s needed for audio applications. So even though speed is specified in amps, any full-bandwidth amp is fast enough for audio.

To sum it up from a technical standpoint, in all but the most extreme cases, worrying whether an audio product is fast enough is like asking, “Sure, Elaine Thompson-Herah was fast enough to win the gold medal in the women’s 100-meter dash at the 2021 Tokyo Olympics, but is she fast enough for a casual stroll around the park?”

You can see why technically minded audio enthusiasts might get frustrated when other enthusiasts describe an audio product as “slow.” But even though the term is technically inaccurate, listeners are clearly hearing something. Haven’t we all heard headphones that sound slow—plodding, muddy, boomy, indistinct?

I thought maybe I could clear up the issue by comparing measurements of “slow” headphones with those that might be described as “fast.” I had plenty of measurements of high-end, audiophile-pleasin’ headphones that enthusiasts would surely call “fast.” Now I just needed some slow headphones.

Trying to remember what the “slowest” headphones I’ve heard were, I thought back through my 12 years of headphone reviewing and came up with a “winner”: the original Skullcandy Hesh, a cheap over-ear model made before Skullcandy invested in measurement gear and engineering expertise. The Heshes sounded muddy and dull, almost as if they had a layer of grease smeared on the drivers. (To be fair, though, that was an era when it seemed almost all new headphone makers were convinced they needed colossal amounts of bass to compete.) 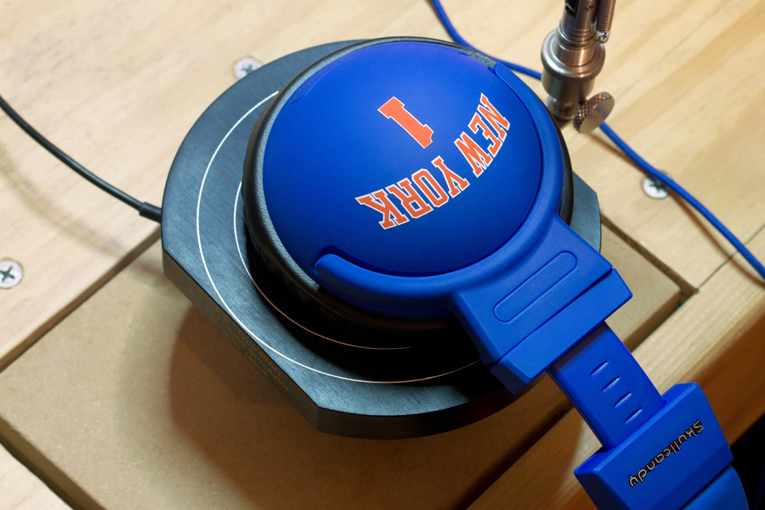 Unfortunately, I didn’t have any measurements for the original Hesh headphones because I bought my GRAS 43AG Ear and Cheek Simulator about two years after I started reviewing headphones. But I was able to find a factory-fresh set of Hesh headphones, still in the blister pack, on eBay. Even better, they had New York Knicks logos and were finished in the team’s blue and orange colors—exactly what you’d wear if you wanted to look obnoxiously ironic at a CanJam show. I thought I’d compare the Heshes with headphones I’m confident no one ever said were slow: the Sendy Audio Peacocks.

Right away, I wanted to compare the impulse response of the two headphones. The impulse response is basically the output of the device (shown here in pascals, the non-logarithmic version of sound pressure level in decibels) over a certain span of time. This will literally tell us how quickly a headphone responds to an audio signal. 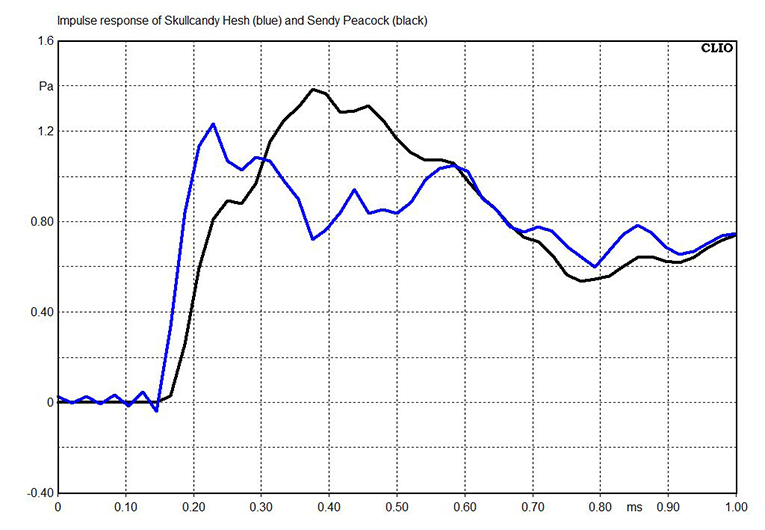 Here’s a chart showing the impulse response over the first millisecond. I was surprised to see that the Heshes responded faster to the impulse (in this case, a logarithmic chirp) than the Peacocks did. So from a technical standpoint, the Heshes are faster—but I doubt any listener would describe them as faster. But limiting this chart to a 1ms window makes it essentially a “closeup” of the response. Let’s see what happens if we open up the window to the Clio analyzer’s maximum window of 341ms. 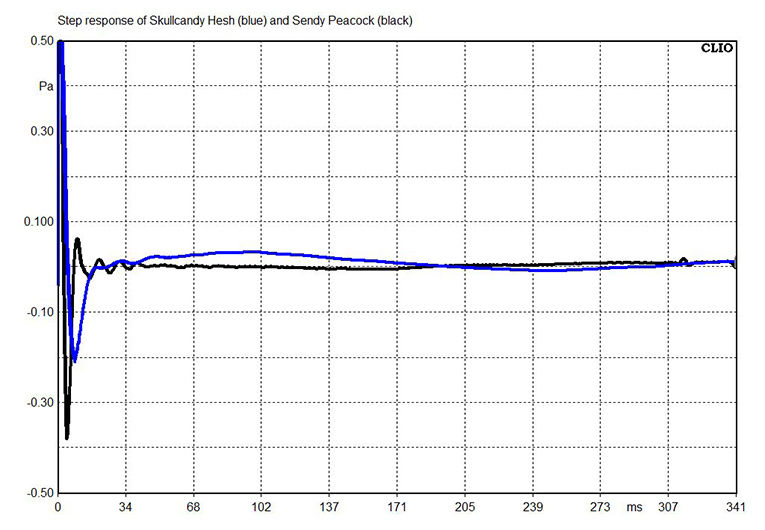 In this chart, we can see that the Heshes didn’t settle back down to zero output as quickly as the Peacocks did—but what little ringing the Heshes did exhibit was about 30dB below the level of the original impulse (calibrated to 94dB at 500Hz), and it appeared to occur only at subsonic frequencies.

So the time-versus-output measurement that should, in theory, tell us if a set of headphones is fast or slow doesn’t help much. But a more common measurement does. 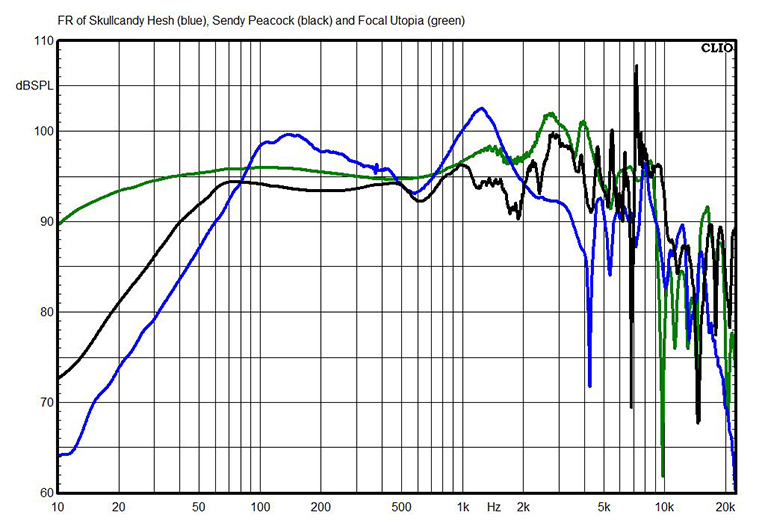 This chart shows the frequency response of the Hesh and Peacock headphones; I also threw in the response of Focal’s ultra-high-end Utopia headphones to hammer home the point. You can see how far off the Heshes are from the other headphones. In this case, the most important characteristic to note is the Heshes’ relative lack of output between about 2 and 7kHz. Almost all of the good-sounding headphones I measure show a peak in output around 2 to 3kHz, which not only gives them much more upper-midrange and lower-treble presence, but also makes them sound more spacious and natural because it more or less mimics what your eardrums experience when hearing good speakers in an acoustically decent room. Without that peak, the Heshes sound dull, indistinct . . . and slow. While the Peacocks and the Utopias, with much more presence right in the range where the human ear is most sensitive, sound fast.

So while using the terms “slow” and “fast” to describe the sound of an audio product isn’t in any way technically accurate, it does give us a useful, if highly subjective, sense of what an audio product sounds like. In my opinion, it’s just as suitable to call audio products “slow” or “fast” as it is to call them “dark” or “bright” or “warm” or “soft.”

Douglas Barnes 6 days ago Are There Valid Objections to the Harman Curve?
Thanks for hosting a rare civil discussion of a topic that seems to generate heat ...