Optoma NuForce HEM8 earphones measurements can be found by clicking this link.

How many drivers do earphones really need? I’ve heard models with as many as eight per ear. I’ve also heard excellent earphones that have just one driver per ear. With their HEM earphone models, Optoma NuForce lets you decide. You can get the single-driver HEM2s ($119 USD), the two-driver HEM4s ($299), the three-driver HEM6s ($399), or the four-driver HEM8s ($499). All share the same enclosure shape and features. When NuForce asked which I wanted to review, I opted for the top-of-the-line HEM8s. 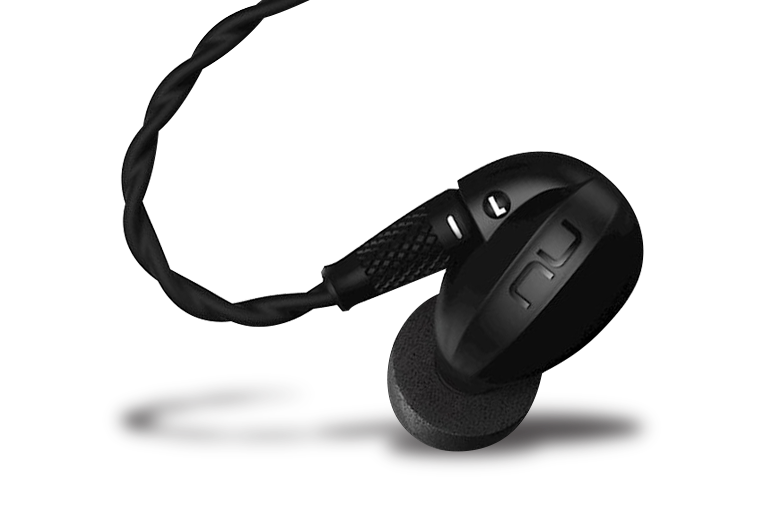 The earphones in the HEM line share basic characteristics. All employ balanced-armature drivers, which work essentially like a tiny, magnetically driven teeter-totter connected to a diaphragm that produces sound. Balanced armatures tend to deliver more detailed, natural treble than conventional dynamic drivers, though they have a rep for being a little light in the bass. The drivers are contained by a housing of stiff, purportedly nonresonant Lexan.

The HEMs feature over-the-ear cable routing, which is a little fussier to deal with than standard earphone cables but tends to deliver a more secure fit and, in my experience, a better seal between earphone and ear canal. The cables are detachable, and two are included: a standard cable with an inline mike/remote for use with smartphones, and a braided cable with a mix of oxygen-free copper and silver conductors. The cables connect to the earpieces with two-prong connectors, rather than the increasingly common MMCX coaxial connector.

NuForce supplies a wealth of accessories with the HEMs. Each set comes with the two cables mentioned above, Comply foam eartips in two sizes, plus six pairs of silicone tips, in three sizes and two different durometers, one softer than the other. Two cases are supplied: a large, Pelican-style waterproof case of rugged plastic, and a semi-hardshell fabric case that can fit into a pants pocket. A 1/8"-to-1/4” adapter is also included, along with a cleaning tool. 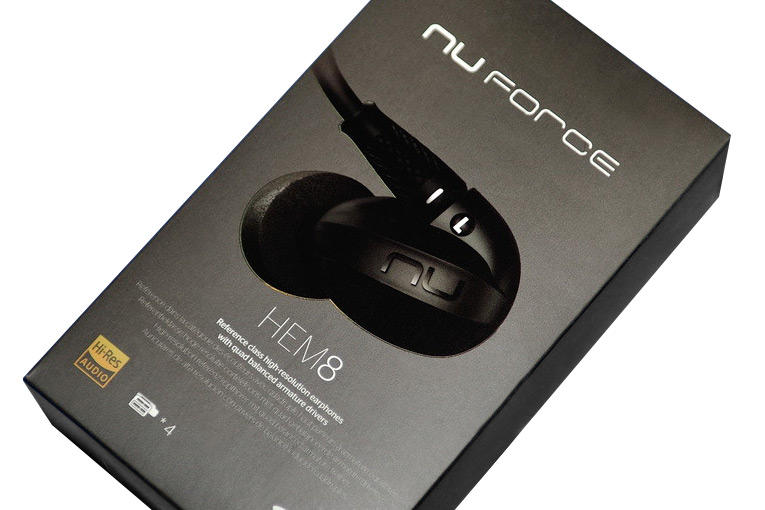 Like most well-designed earphones with over-the-ear cable routing, the HEM8s were a pleasure to wear. The design, combined with the generous selection of eartips, practically ensures a good fit. I found that with the larger of the two sets of Comply foam tips installed, my ears didn’t mind the presence of the HEM8s one bit, and I enjoyed excellent isolation from outside sounds.

I later tried using the largest of the silicone tips, to hear what the difference in tonal balance might be. I was disappointed to note how easily the silicone tips slid on and off the soundtubes. A few times, when I’ve removed earphones, their loose-fitting eartips have gotten stuck in my ear canals; it’s a little scary, and once required that I have a friend remove the tip with tweezers.

One more gripe: The audiophile cable, which is the one I used most, tangled easily. I guess so many earphones now come with tangle-resistant cables that I’ve gotten spoiled.

Anyone who dismisses balanced armatures as lightweight in the bass will have to discard that opinion after hearing the HEM8s. With every recording I played, I got plenty of bass. But the bass was never excessive; no one would mistake these earphones for a Beats product. Listening to “Two Jimmys” from In Movement, the new album by saxophonist Ravi Coltrane, electric bassist Matt Garrison, and drummer Jack DeJohnette (256kbps MP3, ECM), I got plenty of kick from Garrison’s low notes and DeJohnette’s kick drum. Most important, in the beginning of the tune, where the two play in tight rhythmic unison, I could clearly differentiate the sounds of their instruments -- many earphones and headphones would have blended them into an insistent and undefined thud. Coltrane’s saxophone also had a nice, open sound, with no midrange coloration.

With “I’m the Caring Kind,” from jazz singer Susie Arioli’s Spring (256kbps MP3, Spectra Musique), the HEM8s had a relaxed sound that delivered Arioli’s mellow voice with no noticeable frequency-response colorations -- i.e., no dips or peaks in the midrange, a just-right amount of bass, and a smooth treble that made the ride cymbal sound clear but not in-your-face, as some earphones would. The tenor-sax solo in this track also benefited from the HEM8s’ unhyped treble; the articulation of the notes came through with no excess of breath sounds, and without exaggerating the noises of the sax’s keys. In comparison, the PSB M4U 4s ($299), which have a single dynamic driver and a single balanced armature per ear -- and are one of my favorite multidriver earphones -- made Arioli’s voice sound relatively thin and a little harsher. 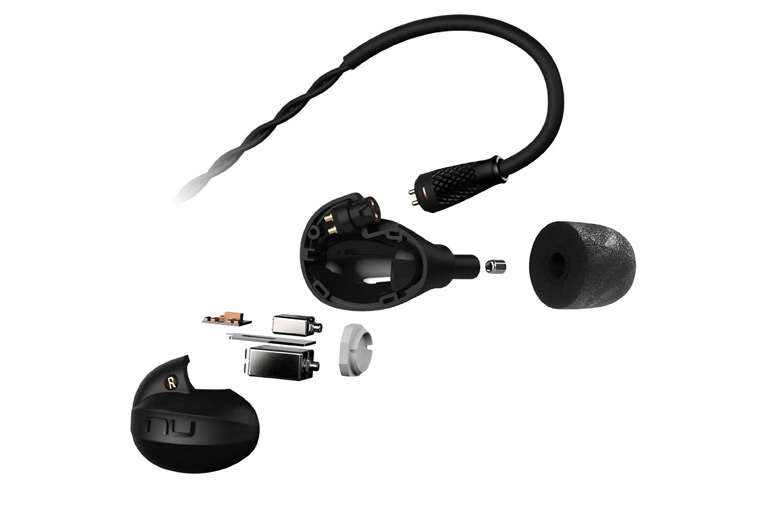 Likewise, the PSB M4U 4s brought out the detail, breath, and spit in the three battling tenor saxophones in “Giant Steps,” from Doug Webb’s Tripl3 Play (256kbps MP3, Posi-Tone) -- but with three great sax players cooperating and competing on this notoriously frenetic tune, the treble could get a little overpowering. Through the HEM8s, the mix didn’t sound quite as exhilarating, but I found Tripl3 Play less fatiguing to listen to long-term than with the M4U 4s.

Eager to revel in a bit more bass glory, I played Jory Herman’s performance -- on double bass -- of the Allemande of J.S. Bach’s Suite No.3 in G Major for Unaccompanied Cello (247kbps MP3, Jory Herman). This album presents an unusual opportunity for audiophiles: a video on Herman’s website clearly shows the microphone placement and the characteristics of the church in which the album was recorded, so we can have some idea of how it’s supposed to sound. The HEM8s captured all the body of Herman’s double bass, complete with that lovely sound the instrument makes when it almost seems as if it’s breathing through its f-holes -- which, technically, it sort of is. I loved the way the HEM8s portrayed the meaty scrape of the bow on the bass’s low E string; this is such a kick-ass sound when you hear it live, and I thought the HEM8s nailed it. The HEM8s also delivered what sounded like a pretty accurate portrayal of the church’s acoustic.

What I didn’t hear as much of as I expected was the high-frequency noise of the bow hairs scraping across the strings. Of course, I don’t know the characteristics of Herman’s bow or bass, or his bowing technique, so I can’t swear that the HEM8s were getting it right or wrong. Once again, I tried swapping out the HEM8s for the PSB M4U 4s. Through the PSBs, Herman’s bass sounded substantially different. For starters, it sounded as if I’d moved 10’ farther away -- the bass’s deep resonance was mostly gone. However, not only could I hear the bow hairs bite into the strings, I could hear Herman’s breath, his left hand sliding up and down the strings, and little clicks and rustlings as his arms and chest contacted the bass. When Herman hit his instrument’s lowest notes, the high-frequency sounds of the scraping bow began to outweigh the fundamental tones. When I went back to the HEM8s, I could hear all these details only if I turned the volume up considerably louder. Which was right? Which was the intent of the artist? Again, I don’t know -- but I do know that many audiophiles crave high-frequency detail, sometimes to the point of brightness, and in this case the HEM8s didn’t deliver it. 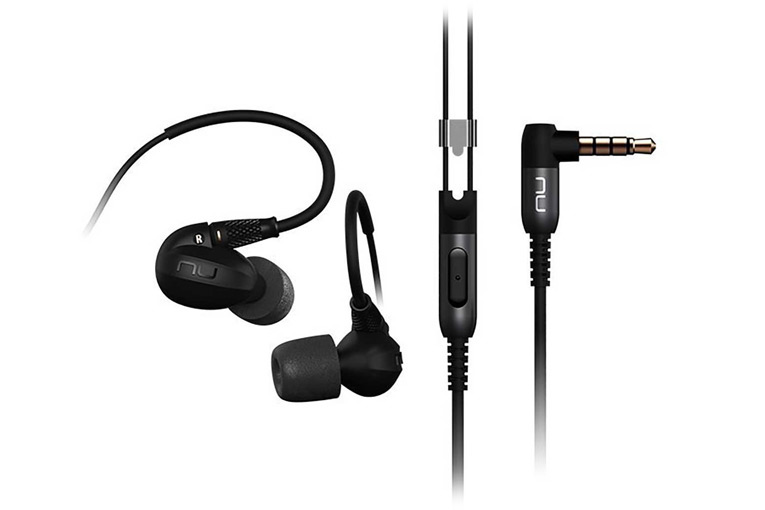 I also listened to this recording through the Klipsch Reference X20i earphones ($549), which have two balanced armatures per ear. The X20i’s came between the HEM8s and the M4U 4s, with just slightly more treble detail than the NuForces -- and thus more bow scrape and a little more ambience -- but less body and power in the bass.

Wanting to get a more complete perspective on the HEM8s’ reproduction of orchestral strings, I played Movement 1 of Concerto No.2, from David Chesky’s The Venetian Concertos (24-bit/96kHz AIFF, Chesky). The HEM8s did sound somewhat soft when reproducing the violins, violas, and cellos, three instruments whose sounds always have fairly strong high-frequency content. I thought the sound went a little too far to the mellow side, especially when I compared the HEM8s with the M4U 4s. Out of curiosity, I tried using the largest of the supplied silicone eartips with the HEM8s instead of the Comply tips, and these did give me a slightly brighter sound. Still, I prefer wearing Comply tips, because they seal better and are more effective at blocking outside sounds. I found myself wishing NuForce had kicked the HEM8s’ treble up a couple of decibels.

I always enjoyed using the Optoma NuForce HEM8s, partly because of their great fit and partly because their midrange sounded so smooth and uncolored. However, as my listening experience and measurements demonstrate, their treble is somewhat soft relative to their many competitors, and I know some audiophiles will prefer a more lively, more exciting sound. Bottom line: If you’re looking for high-end earphones that don’t exaggerate anything, never “bite” your ears with harsh treble, and provide full yet precise bass reproduction, the NuForce HEM8s are a great choice.